The Full Monty
Musical with music and lyrics by David Yazbek, book by Terrence McNally, based on the 1997 film written by Simon Beaufoy, produced by Uberto Pasolini and directed by Peter Cattaneo 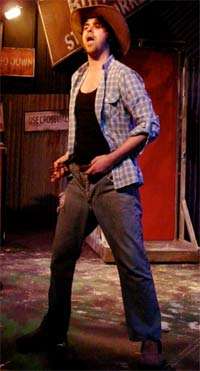 The timing was good for the film of “The Full Monty”. In 1997 unemployment was rife (as it still is) and Simon Beaufoy’s screenplay touched the nerves and the hearts of its audience. Set in Sheffield, it dealt with the problem by offering a possible solution in a cheerful, positive and almost innocent way that gave the film its feel-good factor, a fairy story in that it wasn’t the final solution. Although it was essentially a British film, it was backed by a US company, Twentieth Century Fox, and it was America who decided that what the film of “The Full Monty” needed was to be turned into a stage musical.

Writer Terrence McNally had already written the book for the musical of a film, “A Man of No Importance”, a show that was arguably an improvement on the original screenplay. The show, about a gay Dublin bus conductor, has just finished a London run, its European premiere, at the Union Theatre in Southwark. “The Full Monty”, with a book by McNally and music and lyrics by David Yazbek, opened on Broadway in 2000 and ran for nearly a year. It came to London in 2002 and had a modest run. This is its first London revival. With American personnel involved in the original musical staging of “The Full Monty”, it was clearly aimed at Broadway, which is why the setting of out-of-work steelworkers in Sheffield, England, was moved to Buffalo, New York – same situation, different location. 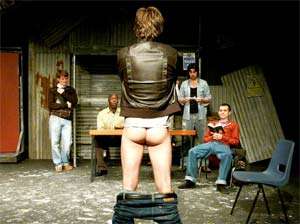 When the steelworks close down, the men are all on unemployment benefit while their wives carry on working as the families’ sole breadwinners. Friends Jerry and Dave bemoan their fates: Jerry may lose access to his son if his ex-wife Pam takes him to court for non-payment of child support, while Dave’s wife Georgie is bothered by her husband being overweight and his lack of fitness. While the women are having fun at a Chippendales’ male strip-show, Jerry hits on the idea of getting his unemployed friends together to do their version of male stripping, with the promise of going the ‘full monty’ and baring absolutely all. Their first recruit is Malcolm, security guard at the steel mills, with no prospects, unmarried, living with his mother. Jerry and Dave save him from gassing himself and he joins the line along with ex-foreman Harold who has a high-maintenance wife, Vicki, who spends too much and who he hasn’t yet told that he’s out of work. He needs to earn some big bucks. Also on-board are Noah, a black guy with dance experience and arthritis with it, and Ethan, a would-be Donald O’Connor dance-alike with a well-hung reputation. Joining them is rehearsal pianist Jeanette.

After the initial nervousness and some setbacks, the boys eventually get their act together and finally go public. If it all seems a little too pat – there’s even a subplot involving two of the men in a budding romance: well it is a fairy story, albeit couched in a fairly realistic setting and if it has any point at all it’s that sticking together as a team and helping one another is the right thing to do. The script has a good collection of laughs which keeps the whole thing grounded and, if the songs are no more than serviceable they do their job adequately enough. Thom Southerland, whose production is something of an improvement on the original London staging, manages to keep the action swiftly on the move and has made a couple of changes that help the show. Firstly he makes Tony the club owner a female part (Jemma Alexander), which only emphasises more the division between the unemployed men and their sensation-seeking wives. He does the same for Jeanette, by casting actor Anthony Wise as Jeanette, the fast-talking, wisecracking, chain-smoking pianist who has seen everything in her time. He doesn’t camp it up but just plays her as a hard-boiled old bag: he’s very funny and very good for the show.

As Jerry, Adam Bayjou delivers the right sort of temperament for a man who has almost hit rock-bottom, Peter St James as the overweight Dave is quite moving as a man emasculated by his wife and now a virtual house-husband. Nick Fawcett also strikes a chord as Harold, the out-of-work big-shot businessman who is scared of his wife and her expensive tastes but can’t bring himself to tell her about his situation. The three wives, Tegwen Tucker as Pam, Sarah Waddell as Georgie and Charleen Quaye as Vicki, come across as the real villains of the piece who have no time now for their worse-than-useless husbands.

Not a great American musical by any stretch of the imagination, “The Full Monty” is however fashioned from a similar mould as any classic show (“The Pajama Game”, “Annie Get Your Gun”, “Guys and Dolls”) in which the characters are fully-rounded personalities. They may be different from their initial counterparts in the film version but they come from an impeccable source, which is why the show works even when transposed away from its original background.