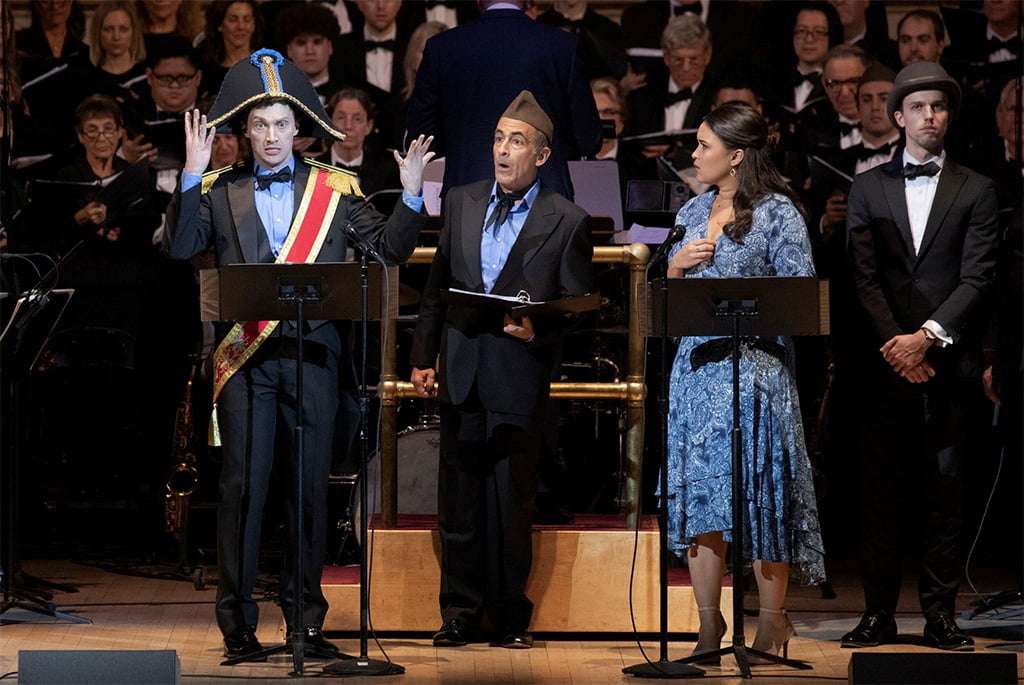 MasterVoices launched its 2019-2020 season with a concert performance of George and Ira Gershwin’s 1933 musical comedy, Let ‘em Eat Cake. Ted Sperling directed and conducted the Orchestra of St. Luke’s along with an outstanding cast of Broadway veterans.

Let ‘em Eat Cake is a sequel to Of Thee I Sing, the Gershwins’ hit show of two years earlier, but it never attained the success of that show or of Porgy and Bess, their next stage collaboration. And despite the high quality of this performance, the piece clearly has not aged well, although some references have relevance to today’s political scene.

As the show begins, John P. Tweedledee defeats the reelection bid of President John P. Wintergreen, whose original election was the main story line in Of Thee I Sing. Wintergreen unsuccessfully asks the Supreme Court to throw out the landslide election results, and once out of office he and his wife Mary start a business selling blue shirts, but it is a failure. Kruger, a rabble-rousing radical who sees his role as opposing whoever is in power, gives them the idea to start a blue-shirt revolution – expressly analogizing it to Germany’s brownshirts and the blackshirts of Italy. “You can’t have a revolution without shirts,” says Wintergreen. He deposes Tweedledee and creates a dictatorship of the proletariat with Wintergreen adopting Napoleon-like dress and authoritarian behavior.

The rest of the plot centers on attempts to collect war debt from European nations, which is made to hinge on a baseball game between the ousted Supreme Court Justices and nine League of Nations countries. When an umpiring decision by Alexander Throttlebottom, the hapless nonentity who had been Wintergreen’s Vice-President, allows the Europeans to win, Throttlebottom is put on trial, convicted and sentenced to death by guillotine. Kruger, backed by the army, seizes power himself and condemns Wintergreen and members of his cabinet to also be beheaded. Mary and cabinet members’ wives manage to have the revolution ended so they can have dresses in colors other than blue, and their husbands leave politics to become dress manufacturers. Tweedledee cannot be restored to office since has accepted an offer to be President of Cuba, so Throttlebottom becomes the new President. 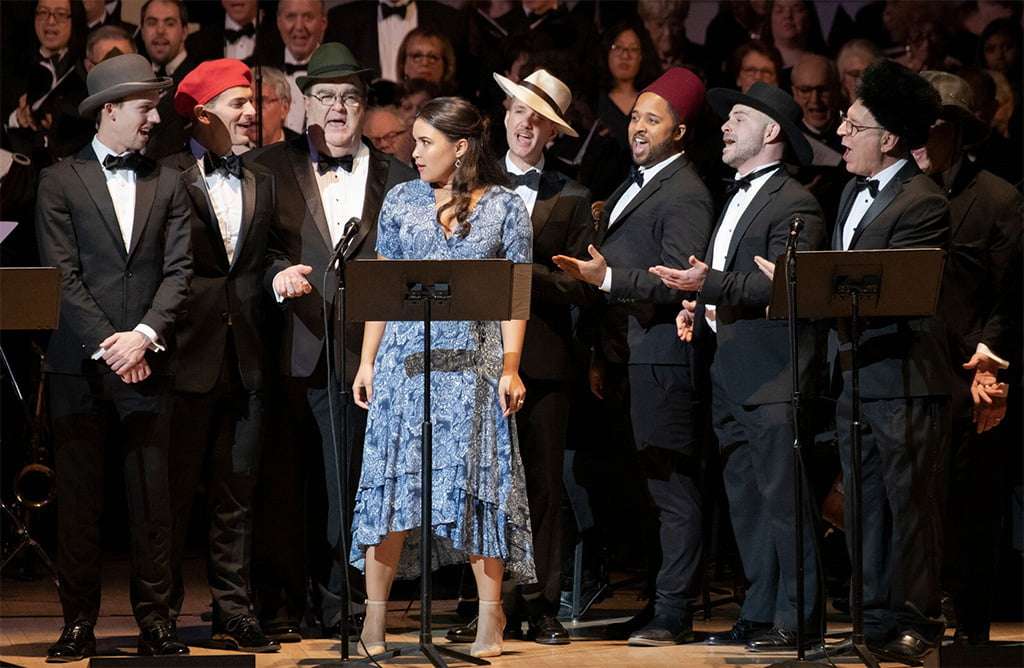 Had the show’s creators realized what European fascist movements would lead to, they might well have steered clear of many aspects of the plot. And even today, with the defeat of the Axis powers in World War Two nearly three-quarters of a century behind us, those themes remain dark and uncomfortable. Worse yet, they rub up against concerns raised by much more recent events both domestic and foreign. The idea of a defeated candidate seeking to overturn election results is a topic that is now being discussed on news and public affairs channels, and neo-fascist movements have recently gained increased traction in a number of European countries.

Viewed from our present-day perspective, George S. Kaufman and Morrie Ryskind’s plot is too inane, and Ira Gershwin’s lyrics are not nearly clever enough to rescue it. “Yankee doodle needs that noodle” and the like just don’t measure up to what followed two years later in Porgy and Bess (for example, “He made his home in/That fish’s abdomen”). It is equally difficult to perceive much of the legacy of W.S. Gilbert, whom Ira cited as an influence on his lyrics. Nor is there a romantic interest that might have provided a diverting non-political subplot.

Putting reservations about plot and lyrics aside, however, there is much to admire and enjoy in George Gershwin’s music, which features catchy melodies and contrapuntal ensembles, all faithfully and excellently sung and played by the large chorus and orchestra under Sperling’s sure-handed direction. This was a strength of the performance right from the opening double chorus that pitted supporters of the two Presidential candidates against each other in counterpoint. Unfortunately, though, the score lacks even one truly memorable song, necessitating a finale that is merely a reprise of the title song from Of Thee I Sing. As Mary, the only principal female role, Mikaela Bennett’s operatic voice soars brilliantly, with ‘Mine’, her duet with Bryce Pinkham as Wintergreen, a highlight.

The libretto is dominated by the male political characters – Presidents Wintergreen and Tweedledee, Vice President Throttlebottom, and the radical Kruger. Speaking in the style of a 1930s radio newscaster, Christopher Fitzgerald served as a narrator providing explanatory information, and also gave a humorous portrayal of Tweedledee. Wintergreen was marvelously performed by Bryce Pinkham, his hilarious carryings-on as dictator showing his talent for physical comedy. His calls for “Order!” as he presides over the trial of Throttlebottom was voiced with a credible impersonation of John Bercow. David Pittu imbued Kruger with vibrant energy and sang with a strong baritone voice, and Kevin Chamberlin was delightful as the inept Throttlebottom. The supporting cast of cabinet members and army general were ably portrayed by four fine Broadway veterans: Fred Applegate, Bill Buell, Chuck Cooper and Lewis J. Stadlen.