Jonathan Dove
Mansfield Park – Opera in two Volumes and eighteen Chapters to a libretto by Alasdair Middleton adapted from the novel by Jane Austen [new orchestral version commissioned by the Grange Festival in memory of Rosalind Prain; sung in English, with English surtitles] 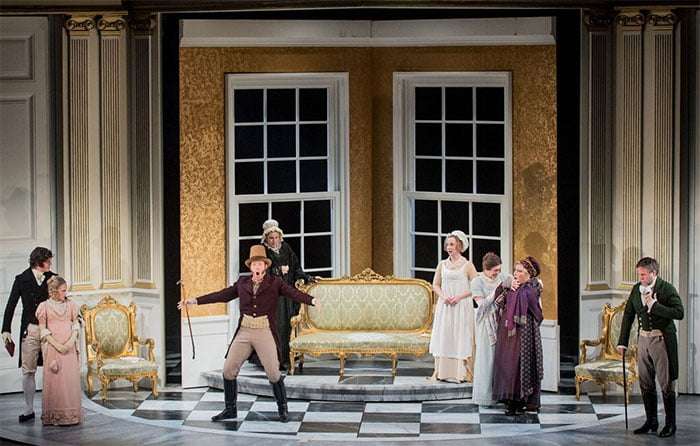 Jonathan Dove’s Jane Austen opera Mansfield Park was first performed in 2011 in a touring production with piano-duet accompaniment from Heritage Opera (which also opened the 2011 Grimeborn season), and there have been two other productions. Closing its 2017 season, this Grange Festival staging, in a new chamber orchestration for thirteen players, should go a long way to consolidate its worth as a finely crafted, instantly attractive opera with two strongly written leads and a retinue of equally well-drawn other roles.

My memories of Jane Austen’s novel – her most complex and probably her least popular – are distant, but it seems that Alasdair Middleton’s libretto has pared-down to its essentials the predicament of poor relation Fanny Price, brought up with chilly charity by the rich, landed Bertram family, and her tortuous route to marriage to the (younger) son Edmund.

Viewed with considerable relief, the surtitles were absolutely crucial to grasping the torrent of words and guiding us through the eighteen Chapters; even with them, and despite the singers’ decisive delivery, not all the detail of marital turmoil and, even by modern standards, the scandalous behaviour unleashed by the smart and selfish brother-and-sister Henry and Mary Crawford, was easy to follow. Set against that were Martin Lloyd-Evans’s sparky, neatly blocked direction and strong emphasis on character and Dick Bird’s stylish set – like a chip off the Grange itself, and easily adaptable to interior and exterior scenes – and clever use of the stage’s revolve; and, yes, there were bonnets – It all looked lovely. 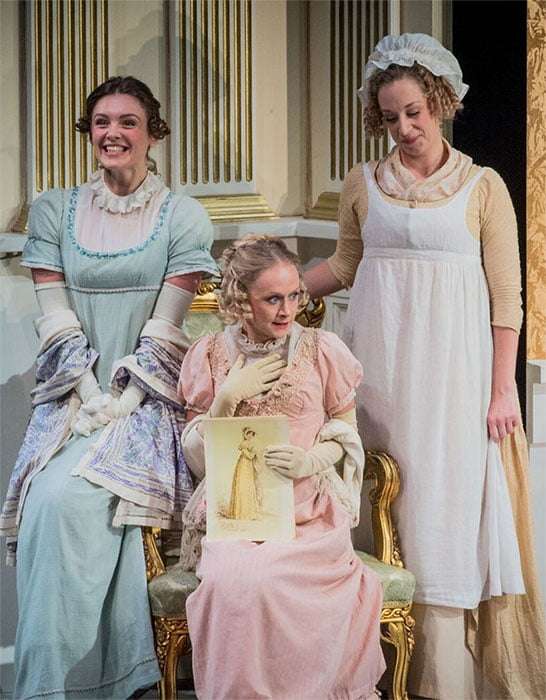 As Flight has proved many times, Jonathan Dove’s music rises to the occasion in terms of drama and characterisation, and Dove has Strauss’s, Britten’s and Jane Austen’s enviable knack of saying one thing while meaning another. Most importantly, he portrays Fanny Price very persuasively – the perceptive, diffident teenager’s old soul, the moral compass who keeps her own counsel and who thinks before she acts – it’s a gift of a part and was played with great insight, poise and passion by Martha Jones, who plucked any number of heartstrings in her soliloquy over her distress for her beloved Edmund’s ludicrous infatuation with Mary Crawford and expressed Fanny’s growing confidence with great conviction.

Dove’s music is also shamelessly tuneful – the waltz at the ball at which the Crawfords put their plans in train is just one apt and memorable example – he brilliantly pinpoints the cruelty of the ‘In the Wilderness’ chapter when Fanny is abandoned in the park as a result of Henry’s philandering, and he supplies a radiant conclusion for when Fanny finally triumphs.

The new chamber-orchestra version, with a prominent, often brilliant piano part, inevitably summons up the Britten of The Turn of the Screw and Albert Herring – interestingly, Britten had considered an opera based on Mansfield Park but then decided on Albert Herring – but there is also a Bernstein expansiveness, while some of the more internal music comes with an intensity worthy of Janáček. The voice, though, is recognisably Dove’s and, as conducted by David Parry in his inimitable, electric style, was played with great panache.

Henry Neill’s warm baritone established Edmund Bertram’s basic decency and he looked perfect as a romantic young gentleman. Grant Doyle easily projected Sir Thomas Bertram’s authority and Sarah Pring’s vague Lady Bertram cooed lovingly over her pug – as in the novel, theirs is hardly a benchmark ideal marriage. Aunt Norris, who is central to the Bertram sisters’ marriage prospects in the novel, is here more of a caricature harridan in her dealings with Fanny, and sung with appropriate venom by Jeni Bern. Emily Vine and Angharad Lyddon presented the sisters as early-nineteenth-century airheads, Shelley Jackson’s big, shining soprano meant that Mary Crawford swept all before her, and Nick Pritchard’s trenchant tenor admirably expressed Henry Crawford’s base and selfish motives. I felt sorry for Oliver Johnston’s well-sung, rather hopeless Mr Rushworth, whom Maria marries purely for his money and her convenience.

Mansfield Park is ideal country-house opera, especially when the Grange itself in the autumn sunlight never looked lovelier, and it deserves to make its way as successfully, and to a wider audience, as Flight.