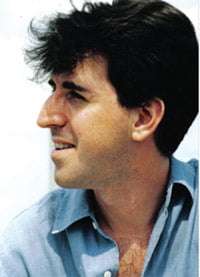 Jason Robert Brown is one the new breed of US songwriters and music-theatre composers, alongside Michael John LaChiusa and Adam Guettel. His first musical, a theatrical song-cycle “Songs for a New World” (1995) played in London at the New Players’ Theatre (and in over two-hundred productions around the world), and “Parade” (1999) came to the Donmar Warehouse in 2007. Co-conceived by director Hal Prince with a book by Alfred Uhry, “Parade” had music and lyrics by Brown and is probably his most ambitious project to date. It was based on a true story about the slaying of a teenage factory girl in Atlanta in 1913. Suspicion was cast on the factory owner who was not only the last person to see the girl alive but also Jewish, an outsider from Brooklyn. He was treated as any black person would have been at the time, but when his wife had the case re-opened his death sentence was commuted to life imprisonment, although the story does not end there. “Parade” proved that Brown could write songs for something as dark as this, altogether a moving and quite exceptional work.

In 2001 Brown wrote his two-hander musical “The Last Five Years” which has also played worldwide including London, at the Menier Chocolate Factory. This is another very emotional piece with an unusual structure. It tells of the five-year relationship between Jamie Wellerstein, a young Jewish writer, and Cathy Hiatt, an actress who is not Jewish but who Jamie calls his “shiksa goddess”. Life seems to be going well for them both at the beginning but as Jamie’s writing career blossoms, Cathy’s acting work goes nowhere. While Jamie acquires a literary agent, Cathy is stuck in a show in Ohio. They start to live together but the rot sets in and Cathy finds Jamie obsessed with his career. They marry but nothing is resolved and the relationship deteriorates.

The structure of the piece is interesting in that Jamie tells his story chronologically as his life gets better and better, while Cathy is telling hers in reverse, writing letters and reminiscing about the times when they were happy. As Jamie’s life moves forward, Cathy’s is going backwards. The only time they meet in the show is at their wedding. Told mostly through song, the music presents a variety of styles and moods, sad and comic, rock and funk mixed with classic Broadway-style. The score is played exceptionally well by Lee Freeman’s excellent ensemble, although, as the Tabard is quite a tiny space albeit with perfect sightlines, the music sometimes drowns out the rather clever lyrics.

Director Drew Baker couldn’t ask for a better cast. His two singers brilliantly capture the changing moods. It is virtually a song-cycle that moves from one idea to the next but Lauren Samuels (finalist in the BBC’s “Over the Rainbow” series) and Christopher Pym cope with what seems not to be an easy piece to sing and also manage to stay in character as well. Lasting eighty minutes with no interval, “The Last Five Years” is a chamber musical that impresses and, perhaps because of its universal theme with which many couples can identify, its popularity is surely guaranteed to last indefinitely.