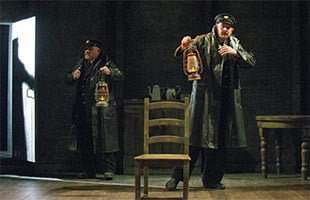 English Touring Opera’s autumn triptych of mid-twentieth-century operas (Albert Herring and The Emperor of Atlantis are the other two) concludes with the most recent, Peter Maxwell Davies’s claustrophobic musical thriller The Lighthouse, composed in 1979. It is also the only one of the three whose composer is still with us, and happily the redoubtable ‘Max’ was present to witness a performance characterised by outstanding musical and artistic values.

Based on a now century-old true event, The Lighthouse could be many things: fantasy, whodunnit, ghost story, psychological drama… Above all, though, it is a mystery. In fact, it’s a real mystery, for the fate of three lighthouse keepers who disappeared from the Flannan Islands Lighthouse in December 1900 remains unexplained. Maxwell Davies makes no attempt to answer the unanswerable; instead he changes Flannan to Fladda (thus marking out his opera as fiction) and, to his own brilliant libretto, spins a compelling huis clos whose supernatural edge recalls the plays of Conor McPherson and whose oblique colloquies smack of Harold Pinter. 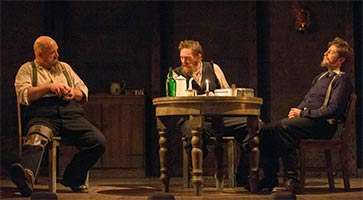 In an extended Prologue, three naval officers report to a tribunal on their discovery of the deserted lighthouse. Their respective accounts differ in small ways, a point whose significance only becomes clear much later on. The extended prologue is treated in this production as an act in itself, after which the hiatus of an early interval allows the hard-worked cast to catch their breath before reappearing as the lighthousemen in the run-up to their disappearance. As Sandy, Blazes and Arthur (names that evoke earth, fire and air) three fine singers turn in searingly truthful, vocally impassioned performances. One almost forgets they are singing, so completely does each man inhabit his role. Their collective energy bounces off the curved walls of Neil Irish’s evocative lighthouse set.

Peter Maxwell Davies has found a subject that could only work as opera, and he treats it to one of his most evocative scores. His beloved Orkney is everywhere in this music: the orchestration is steeped in its storms and gulls, all faithfully conveyed by the excellent Aurora Orchestra under Richard Baker. After a Prologue whose ostinato passages suggest the disciplined atmosphere of a naval hearing, the main Act unfolds through brooding, extended figures in the accompaniment that are interspersed with those paroxysms of mayhem that were a ‘Max’ hallmark in his 1970s’ Fires of London days. (There are unmistakable shades of The Devils in this music.) The composer’s affinity with popular music, too, is given free rein in the dark songs each lighthouseman sings to lift, if not leaven, the oppressive mood. Nicholas Merryweather, whose Blazes is a self-loathing consumptive, is especially disturbing in a swaggering number that conjures up his abused and abusive youth.

The opera’s final section, a vivid depiction of psychological hell, is a virtuoso drama in its own right. The three protaganists are pushed to the limits of their craft as they drag themselves and the audience into a self-destructive orbit of despair around the stone tower. A seastorm brings madness in its wake, and by its end “the room is full of ghosts called out by the foghorn”. Yet even here, as the dance of death gives up the ghost, Maxwell Davies has a final surprise to spring.

If I have not yet drawn attention to Ted Huffman’s sweetly paced production, that is because it does not draw attention to itself. Unshowy yet never less than thrilling, the American director’s stagecraft somehow manages to be restrained and explosive at the same time. As a masterly staging of a great opera it deserves the widest possible audience. Do catch it on its travels: it’ll lift you up and leave you drained.