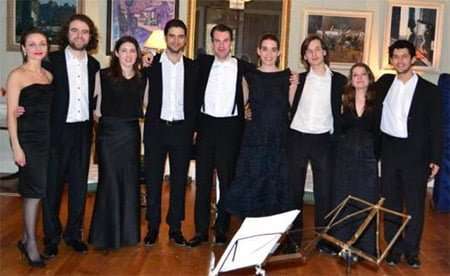 This was the first in a series of lunchtime concerts from The London International Players, an ensemble whose members are drawn from the Menuhin School and IMS Prussia Cove. The programme note informed of the group “having come together through a mutual love of chamber music and common musical ideals”, and those principals were clear to appreciate in this recital, which had a nice structure but overran by 20 minutes beyond the standard hour-long duration; a potential problem for those on a lunch-break.

We began with Mozart, the first of his four airy Flute Quartets. This is ‘light’ music in the weightless sense of the word, abundant in melodic interest and full of charming conversation between the players. Ana de la Vega led an affectionate performance, with a nice transition between the tender Adagio, which assumed the qualities of an aria, and the frothy finale, its cheeky second theme enjoyed by violinist Daniel Röhn. Only in the first movement could there have been more dynamic variation. Mahler’s rather weightier Piano Quartet was next, the composer’s only published chamber music. This had an appropriately sombre tone but began rather slowly, and the melodic phrasing was less clear, the musicians playing with passion but rather unvaried in their tone.

Arnold Bax’s Elegiac Trio (1915) was a nice choice. Written a year after Debussy’s Sonata for the same combination of flute, viola and harp, it nonetheless takes a very different approach to this unusual instrumental combination. Using the piece as a memorial to the republican activist Pádraig Pearse, Bax ultimately finds a positive mood in his remembrance. Martino Panizza began with confident arpeggios that were beautifully coloured, and although the lower register of the harp was sometimes a little murky the textures between the three instruments were abundantly clear, the softer passages of trills for flute and viola shimmering attractively.

Mendelssohn was at the height of his powers when the D minor Piano Trio was completed, a work that bursts forth with a bubbling spring of ideas. Irina Botan led this extremely fine performance, her dexterity and sensitivity ensuring that Mendelssohn’s demands on the piano – which are considerable – were fully met. This was never at the expense of her colleagues, for Botan’s gentle touch enabled the legato melodies often assigned to violin and cello to come through. These were rich in tone from Röhn and Ashok Klouda, the latter particularly strong in the soulful main theme of the first movement. The syncopations in both the scherzo and finale were incisive, the music sweeping all before it when moving from the minor key to the major in the finale, the three players on an unstoppable run.

The quality of these performances bodes very well for the remainder of the six-concert series, which continues through to April next year – an extremely pleasant way to spend a (long) lunchtime!