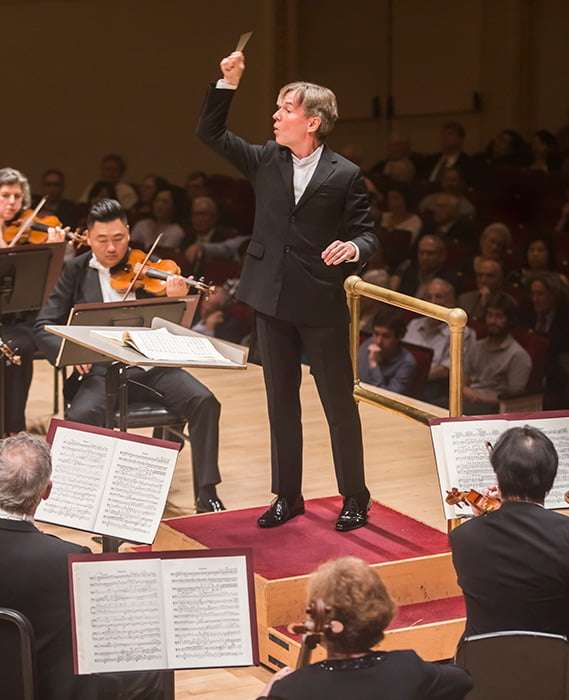 Carnegie Hall, most often the venue of choice for orchestras on tour, had a local visitor, the MET Orchestra concluding a three-concert series with Esa-Pekka Salonen who allowed the woodwinds to bite and the brass to envelop.

Mahler’s short Blumine was originally part of now-lost incidental music and reappeared as the second movement of his First Symphony, only to be excised. It is more of an aperitif than an appetizer; beyond a trumpet solo, elegantly played, the work is forgettable.

Christian Tetzlaff delivered a performance that easily overcame the technical complexity of Sibelius’s Violin Concerto, and arrived at something musically impactful. However, the Finale foretold communication issues that would mar the rest of the evening. A tempo discrepancy between Tetzlaff and Salonen went uncorrected for nearly the entire movement. In search of a solution, Salonen, who had led much of the concert beating ahead of the orchestra (in the European style), switched to conducting on the beat (a standard approach in America). He did muster the orchestra, but not to the satisfaction of Tetzlaff, who remained aloof of the tempo, culminating in a sour conclusion. As an encore Tetzlaff played the last movement of Bartók’s Solo Sonata.

There were woodwind- and brass-personnel changes during the interval. I was expecting a refresh of conductor-orchestra relations, but communication remained difficult as some sections played on the beat, while others after. Salonen struggled mightily to conduct ahead of the orchestra, but it only led to uncertainty and timidity from the players, including multiple fouled entrances in the Symphony.

Mahler’s Kindertotenlieder is a haunting and haunted score. It is, both in the selected poetry (from Rückert) and Mahler’s composition, always a step removed, but never sterile. Anne Sofie von Otter’s presentation matched Mahler’s distance, without resignation or coldness and communicated the text, despite the at-times wickedly slow tempos and phrase-ending ritardandos.

Sibelius’s ultimate Symphony was a disappointment. Trust had seemingly eroded between conductor and orchestra. One glaring example occurred in the final moments when the brass played more than a second ahead of Salonen’s beat; another, in the closing seconds, when a tutti entrance was alarmingly jumbled. One has to wonder if this compact schedule of Carnegie concerts caused a lack of rehearsal for this program.