Mozart
Clarinet Concerto in A, K622
Mahler
Rückert-Lieder
Copland
Clarinet Concerto
Barber
Antony and Cleopatra – Give me some music
Herrmann
Wuthering Heights – I have dreamt
Barber
Vanessa – Do not utter a word 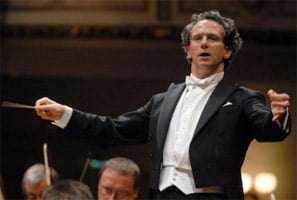 Fabio Luisi took the podium in place of James Levine who remains indisposed following back surgery last summer. Levine had planned this program juxtaposing two world-class clarinetists with soprano Renée Fleming, the first half Austrian, the second half American.

Stephen Williamson’s fleet, streamlined approach to Mozart’s Clarinet Concerto brought out piquancy and playfulness in the crisply articulated, swifter-than-usual outer movements; especially impressive were his nuances of phrasing and dynamics in the finale, and the compelling cantabile and very relaxed tempo in the central movement, one of Mozart’s most beautiful Adagios. Luisi and Williamson were in unanimity in this traditionalist approach to the work — no concessions to ‘authentic’ trends and with a string sound considerably deeper and less aggressive than that cultivated by Levine. 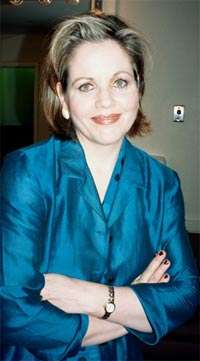 With the challenging, upper-range opening phrase of ‘Ich atmet einen linden Duft’, Renée Fleming sung the first of Mahler’s Rückert-Lieder with forceful extroversion and thrilling control and revealed a somewhat darker sound to her still-luminous voice. I’m not completely sold on her emphatically expressive approach to the first three songs – one could imagine at more than a few points that ‘Liebst du um Schönheit’ and ‘Um Mitternacht’ were composed by Richard Strauss – but one could hang on every word. Fleming’s puckish ‘Blicke mir nicht in die Lieder’ and introspective, poignant ‘Ich bin der Welt abhanden gekommen’ were completely convincing. Luisi’s accompaniment brought out color and evocative moods, complementing and framing Fleming’s boldly dramatized approach.

Anthony McGill is the MET Orchestra’s principal clarinetist — he succeeded Stephen Williamson, who is now in the Chicago Symphony. The present performance of Copland’s Clarinet Concerto, one of the central works in the instrument’s solo repertoire, was simply dazzling. McGill conveys the opening section’s pastoral, wide-open spaces, aural imagery that almost feels suspended in time. The faster second half, filled with swinging urban sizzle and spiky rhythms, is a tough beast to tame, along with the cadenza that separates the works two halves. McGill nailed both with total authority, and the interplay with Luisi’s on-the-money conducting had the feel of jazz-infused chamber music stole the show.

Fleming seemed far more comfortable on her return. Her potent portrayal of ‘Give me some music’ from Samuel Barber’s Antony and Cleopatra, well supported, conjured the image of a forceful and unpredictable young queen – and suggests a reconsideration of this opera may be in order. Bernard Herrmann may have been a victim of his own Hollywood success when it comes to concert halls in America, where there has long been unfounded snobbery toward film composers; Fleming conveyed all the wistfulness and innocence of ‘I have dreamt’, a brief aria from Herrmann’s sole opera Wuthering Heights. The volatile ‘Do not utter a word’ from Barber’s Vanessa was deliciously conveyed and with the most drama. Fleming and Luisi has an encore prepared – ‘I can smell the sea air’ from André Previn’s A Streetcar Named Desire, a stylistic match for Barber and Herrmann.