The Metamorphosis – A Dance-Theatre adaptation after Franz Kafka 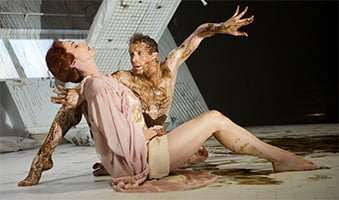 It is not exaggeration to say that Arthur Pita’s The Metamorphosis ranks as one of the finest pieces of dance/theatre that one is likely to see in a long while. It was so when first created in 2011, and it is so again at revival in the Royal Opera House’s Linbury Theatre, here transformed into a vibrant and interesting theatrical space, the seating bisected by Simon Daw’s brilliant traverse set; here it was that quality, art, craft and choreography were to be found. 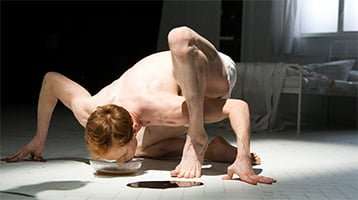 The success has many contributing factors. Firstly, the visual realisation of the set which artfully evokes the kitchen and one bedroom of the Samsa family’s flat, a white world which will soon be transformed. Frank Moon’s music and soundscape performed live by the composer also contributes greatly to the overall effect, heightening and relieving tension. It is a notable collaboration. Arthur Pita’s choreography for his cast bears some of the hallmarks of Matthew Bourne’s vernacular style (Pita has long been associated with Bourne’s work), most notably in the initial sequences depicting the regularity and mundaneness of the Samsa family’s life. But when matters get going with the inexorable transformation of Edward Watson into a ‘giant bug’, the vocabulary widens, giving that remarkable dancer the most extraordinarily powerful movement. The cast is admirable, from Laura Day’s maturing sister Grete (here a burgeoning ballet student) and the mournful Nina Goldman as his mother to Neil Reynolds as his taciturn father and the busy-bee maid Bettina Carpi who shows sympathy for Watson’s grotesque. 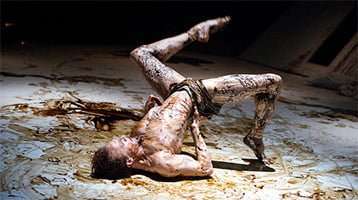 Watson is nothing short of superb in a performance of colossal proportions: physical, emotional and dramatic. His anguish and torment as his body ‘becomes’ insectoid is often painful to watch, his eyes portraying deep hurt and incomprehension even as he contorts and twists. Watson’s physique is startling, capable of pushing itself to extremities one would not have thought possible, and thus allowing him to depict inhuman movement, limbs performing the ‘wrong’ functions, hands becoming feet, toes like prehensile fingers, arms as legs, legs as arms. It is disconcerting, troubling, fascinating and utterly brilliant. Just as one begins to accustom oneself to this visual challenge, a nightmare sequence introduces black body-suited beings which bring what look like black oil with them (in reality molasses or black syrup). Soon Watson is dripping with it, his lean, almost flayed torso as visually disturbing as that of a skinned rabbit, and then on he writhes and slithers, the oil eventually smearing, dripping over, splattering every corner of the set, the pristine whiteness transformed into a nightmare of seeming putrescence. And still his eyes shine with humanity and plead and yearn in striking contrast to his near-automaton movements when fully human , nowhere more touchingly than in a pas de deux with his unconscious mother (fainted at the sight of his grotesqueness) in which he rolls, supports and nuzzles her. Devastatingly moving.

I cannot praise this enterprise too highly. It is theatre of the highest calibre containing a performance of such blazing brilliance as to make much of what passes on other stages seem trite and inconsequential.