The Orchestra of the Metropolitan Opera
Daniele Gatti 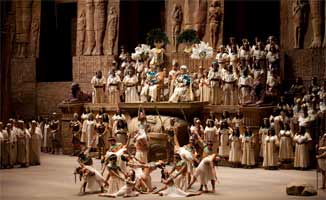 “Aida”, Verdi’s twenty-sixth opera (he wrote 28), ingeniously combines the strengths of Italian Romantic melodrama with those of French Grand Opera. The current production, which premiered in 1988, masterfully captures Verdi’s intentions: the scenery is magnificent, with huge columns covered in painted images of gods and goddesses dominating. In the celebrated triumphal entrance of the Egyptian soldiers and their Ethiopian captives to trumpet fanfares (Act Two), a pair of caparisoned white horses pull a chariot with Radamès in it. Even in Act Three, with its sublime Nile River landscape and star-encrusted sky, the visual effects are stunning. Throughout the opera, the colossal columns and elephantine temples, statues, and king’s palace evoked in the mind’s eye what pharaonic Egypt must have looked like; the resplendent costumes add greatly to this realism and imagery.

“Aida” is an opera replete with local colour, all of which the cast, orchestra, and conductor handled with aplomb and skill. Violeta Urmana presented a cogent Aida, demonstrating a wide vocal range and considerable flexibility, a marvelous portrait of a woman exhibiting elation, desolation, and hopelessness, her powerful singing voice was at its best in the various duets, not least professing her love for Radamès – with whom Amneris is also in love. Urmana’s voice had the appropriate touch of pathos required for a woman thinking her beloved had died in battle. Aida’s final duet, at the end of the opera, with Radamès in the vault below the temple of Vulcan, where he has been condemned to be buried alive for giving away the location of his troops, showed Urmana at her emotive best: she had crept into the vault to die with Radamès, and this unselfish love on her part was brought out with astounding conviction and brutal honesty. 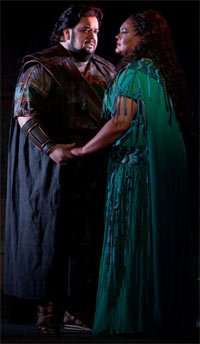 Dolora Zajick as the King’s daughter Amneris was the powerhouse voice of the evening. Her booming middle and top notes reflected Amneris’s no-holds-barred desire to get her man. In Act Two/Scene 1 Amneris tricks Aida into believing that Radamès has died, thus discovering that Aida does indeed love Radamès. Zajick vocally exhibited such malevolence quite convincingly. She also imparted a soft side to Amneris, as heard in the final invocation at the opera’s close when Amneris prays for eternal rest for Radamès. 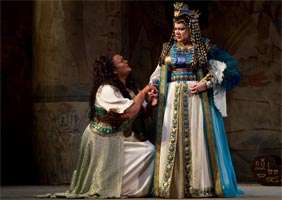 As Radamès, Johan Botha’s ringing top notes and supple middle range were very effective. ‘Celeste Aida’, in which Radamès muses on his beloved Aida, was sung with soulful intensity and emotional complexity. Botha beautifully sang ‘Morir! Si pura e bella’ (To die! So pure and lovely) just before the imminent deaths of Radamès and Aida together.

As Ramfis, Roberto Scandiuzzi’s clear, dramatic voice contained all the subtleties of vocal colour needed to convey his character’s mean-spiritedness, as in when he leads the priests (offstage) in Act Four in condemning Radamès as a traitor and sentencing him to death, even after Amneris begs the priests not to. Ramfis opens the opera, Scandiuzzi setting the vocal mood with his effective inflected singing indicating his anxiety at the crossing of Egypt’s borders by the Ethiopians.

Carlo Guelfi (Amonasro) had an impressive stage presence, and his full-bodied, luxuriant voice was evident in his couple of short arias, such as when in Act Three Amonasro tries to convince his daughter Aida to discover from Ramadès the location of the Egyptian army. Guelfi was imposing, both vocally and physically. Stefan Kocán (The King), in his Met debut, also had appropriate physical presence and vocal dynamics to be a convincing Pharaoh. Adam Laurence Herskow (A Messenger) and Jennifer Check (A Priestess) performed admirably.

The Chorus was outstanding. The dancing was marvellous throughout, whether performed by the two soloists or by the troupe representing slaves and priestesses.

Daniele Gatti, the Orchestra, and the singers, were in complete synch, and the Orchestra never overwhelmed the singing. Gatti elicited lush harmonies and refined playing. This was a fine performance, with Gatti in complete control throughout the evening.