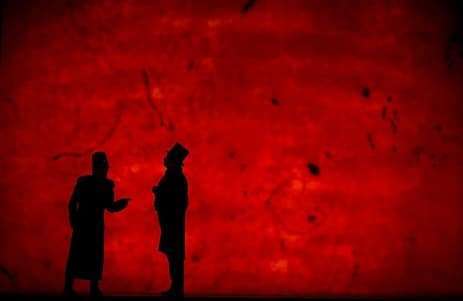 This first-night performance was to have been the Metropolitan Opera debut of Thomas Hampson as Wozzeck, but he had to withdraw owing to illness. Thus Matthias Goerne made a spectacular last-minute appearance as the antihero – something he was scheduled to have done in 2011 when it was he who withdrew for medical reasons. Goerne had already been in New York for appearances at Carnegie Hall, including a concert version of Wozzeck. It was not until after performing Schubert’s Die schöne Müllerin, the night before, that Goerne was invited to replace Hampson. Therefore he performed at the Met after only a single rehearsal with James Levine (although he had the benefit of having attended the dress earlier in the week). That limited preparation proved more than sufficient, however, and the performance came off smoothly even though nearly all of the other principals were also singing their parts at the Met for the first time, including Deborah Voigt, Peter Hoare, Simon O’Neill and Tamara Mumford, with Clive Bayley in his Met debut.

Goerne, well-versed as Wozzeck, gave a brilliant performance, both vocally and dramatically. He was completely credible as the troubled protagonist as he submits to the degradations heaped on him by the Captain and the Doctor, becomes angered by his common-law wife Marie’s infidelity with the Drum Major, and is increasingly overwhelmed by hallucinatory visions, culminating in his senseless murder of Marie and his own death by drowning. Goerne demonstrated terrific vocal versatility, drawing on the beauty of his voice at times, yet exploding with raw power at others. 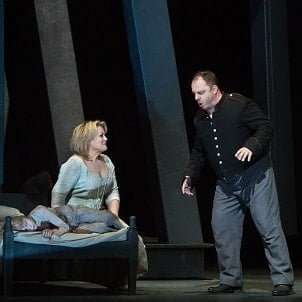 Singing her first Marie, Voigt was in fine form, shifting seamlessly across a wide range of styles, from powerful declamation to Sprechgesang and Sprechstimme, and from lyrically melodious to harsh and dissonant. Her portrait of Marie’s multifaceted character was touching in her love for her child and concern for Wozzeck, hostile toward her neighbor Margret, and lustful and seductive in her encounter with the Drum Major. All three of Wozzeck’s nemeses – Hoare’s fearful Captain, Bayley’s crackpot Doctor and O’Neill’s strutting Drum Major – were sung resonantly and depicted hilariously. Russell Thomas, reprising his portrayal of Andres from 2011, Tamara Mumford, Richard Bernstein, and Philippe Castagner also performed well, as did the Metropolitan Opera Chorus in the tavern scenes.

Mark Lamos’s production, which premiered in 1997 and is in its sixth revival, is perfectly suited to this allegorical tale and the music to which it is set. Robert Israel’s sets are simple and uncluttered, with tall blank walls onto which James F. Ingalls’s lighting casts enormous shadows that offer a silent commentary on what is happening on the stage. In the opening scene, for example, although Wozzeck is disdained and abused by his superior officer, his gigantic shadow towers over the Captain’s. Each scene ends with the slow descent of a huge black curtain, thus emphasizing the opera’s episodic nature and avoiding any visual distractions during the momentous orchestral interludes. When the opera was last performed at the Met, the union of Marie and the Drum Major was graphically portrayed, but on this occasion Berg’s stage directions were adhered to, leaving an empty stage as the curtain fell to end Act One. In Act Three, Marie’s murder and Wozzeck’s drowning take place in front of a crimson backdrop, against which the Captain and Doctor are seen in silhouette as they ignore the moans of the drowning man.

James Levine believes Wozzeck is one of the most important musical landmarks of the twentieth-century and has maintained it in the Met’s repertory throughout his tenure as music director, even conducting it when he severely curtailed his workload while recuperating from surgery. He evoked a brilliant and lucid performance of Berg’s fascinating score. The high strings contributed gorgeously melodic passages, the low strings punctuated darker moments, and there were many fine solos. The whole orchestra made an incredible sound, all playing B-natural, in the pair of crescendos that followed the murder scene, and then combined in the last interlude to put a musical seal on the drama, leaving only the final setting of children at play to bring the opera to a poignant close. This was in every respect a definitive performance of a masterpiece. At the time of writing this review (March 7), Hampson remains listed to appear in the rest of this run.