Strauss
Ariadne auf Naxos – Opera in one act with Prologue to a libretto by Hugo von Hofmannstahl [sung in German with Met Titles in English, German & Spanish]

The Orchestra of the Metropolitan Opera
Kirill Petrenko 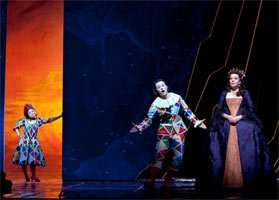 This was the second performance in the Metropolitan Opera’s current revival (the company’s sixth) of Elijah Moshinsky’s seventeen-year-old production of “Ariadne auf Naxos”. The Richard Strauss-Hofmannstahl work is an opera-within-an-opera. In eighteenth-century Vienna, a very rich nobleman has arranged for his dinner guests to be entertained by a commedia dell’arte troupe and the premiere performance of a new one-act opera seria based on the Ariadne legend. In order for a planned fireworks display to go off on time, the host decrees that the comic entertainment and the tragic opera be presented simultaneously. The opera based on the tragic situation of Ariadne abandoned by her lover Theseus will be performed with elements of an opera buffa intermixed.

“Ariadne auf Naxos” is presented in two parts, ‘Prologue’ and ‘Opera’. ‘Prologue’ presents the backstage events and is full of spoken dialogue as the prima donna rehearses the role of Ariadne. After intermission is ‘Opera’, in which members of the commedia dell’arte troupe cross-over and confront the grieving Greek goddess on the island of Naxos. 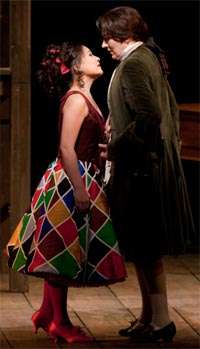 Elijah Moshinsky’s whimsical 1993 production perfectly balances the foolish elements of the work with the more fantastic ones. The opera buffa troupe members are a charming but bungling group. The three nymphs – Najade, Dryade and Echo – are strikingly characterized as gigantic, white-wigged ladies gliding about the stage in tie-dye coloured, eighteenth-century-style dresses. The intricately directed ‘Prologue’ depicts a grand, backstage scene, full of platforms, pulleys and bickering players. In ‘Opera’ there is an appropriately surreal quality about the backdrop panels, a series of shifting frames depicting ancient astronomical charts.

Back at the Met for the first time since her debut run as Senta in “Der fliegende Holländer” nine years ago, Nina Stemme gave a commanding performance in the eponymous role; her Ariadne was distinguished by an aptly magisterial presence and an earthy, powerful voice that plunged easily into the lower passages at the start of ‘Es gibt ein Reich’ (There is a land), and an often penetrating sound in its upper registers. She has a tendency to push her voice beyond its resources, but she is a compelling actor and brought deeply moving insight to the role of the distraught goddess.

Lance Ryan, making his company debut in the part of Bacchus after being sidelined with a cold on opening night, worked hard in the short but punishing role. He demonstrated impressive stamina and coped well with the high-lying tessitura, but lacked the required vocal sheen.

In ‘Prologue’, Sarah Connolly, in the trouser-role of the Composer, gave a vocally ardent performance, full of emotional directness and loveliness of sound. And Jochen Schmeckenbecher, making his Met debut in this production, was impressive as the Music Master. Kathleen Kim was a perky and bright-voiced Zerbinetta with a dazzling coloratura technique. The role of Harlekin was superbly sung and acted marvellously by Markus Werba, another singer making his Met debut in this production.