Strauss
Ariadne auf Naxos, Op.60 – Opera in one act with Prologue to a libretto by Hugo von Hofmannsthal [sung in German with Met Titles by Sonya Friedman]

The Orchestra of the Metropolitan Opera
Fabio Luisi 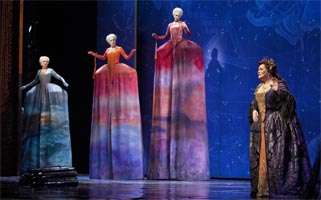 With just a week remaining in the Metropolitan Opera’s 2010-11 season, Richard Strauss’s Ariadne auf Naxos is being given only three performances. The Met’s principal guest conductor, Fabio Luisi, known for his affinity with Richard Strauss’s music, led a delightful performance of this Elijah Moshinsky production, which premiered in 1993. Although overshadowed by “Der Rosenkavalier” (the immediately preceding collaboration between Strauss and Hugo von Hoffmannsthal), Ariadne more than holds its own as a delightful admixture of the tragic and the comedic, both musically and dramatically. Indeed, that juxtaposition of contradictory elements lies at the heart of the plot, in both the ‘Prologue’ and the succeeding ‘Opera’. 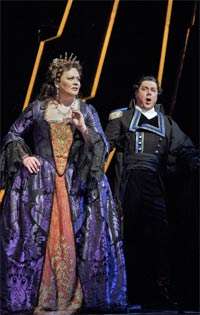 In the former, a wealthy Viennese nobleman dictates that a commedia dell’arte troupe perform simultaneously with the opera seria Ariadne auf Naxos that he has commissioned for the after-dinner entertainment of his guests, in order to allow a planned fireworks display to begin on time. Backstage, bustling with props, stagehands, performers and household servants, intrigues and jealousies abound among the Music Master, his young protégé the Composer, the opera singers, and even the Wigmaker. There is also fierce rivalry between the operatic entourage and that of the comedians. The Composer is distraught at the patron’s outrageous demands, but his mentor takes it more in stride, as does the comedy troupe and its star performer, Zerbinetta, but her flirtatious efforts to charm the Composer fail to prevent his anger from erupting as the bizarre joint performance is about to begin. After the interval, the ‘Opera’ opens with the Cretan princess Ariadne despondent and longing for death after being abandoned on the island of Naxos by Theseus, whom she had helped to slay the Minotaur. The attempts of the commedia dell’arte players to cheer up Ariadne with a serenade by Harlekin, some slapstick, and advice to the lovelorn from Zerbinetta are all in vain. It is only the arrival of the young demi-god Bacchus (Dionysus in the Greek myth) that finally gives Ariadne the will to live – and love. 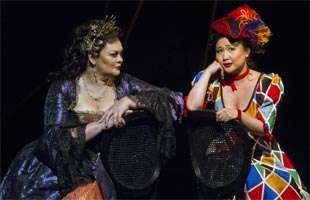 The ‘Prologue’ is at first rather conversational, the Music Master’s recitatives alternating with the Major-Domo’s spoken dialogue. It becomes increasingly melodic – save for the repeated spoken interruptions by the Domo – as the Composer conceives and develops a motif for his opera, tries to placate his disgruntled singers, engages in a charming duet with Zerbinetta, and finally sings a hymn to the sacred art of music (‘Musik ist eine heilige Kunst’), only to be shocked back to harsh reality when Zerbinetta whistles to call her fellow-comedians to the stage. The three principals who appeared only in the ‘Prologue’ gave outstanding performances. Joyce DiDonato, making her role debut as the Composer, was spectacular in carrying off this trouser-role in unusually credible fashion, singing expressively as her character ran through a wide range of emotions. Her performance was transfixing when the Composer, catching sight of a child in harlequin costume, conceives a musical idea that blossoms out in the ‘Prologue’ and then reappears in the ‘Opera’, and passionate in the fervent hymn to music that serves as the climax of the ‘Prologue’. Sir Thomas Allen, who has been appearing regularly at the Met for nearly thirty years, was in excellent voice in his sympathetic portrayal of the beleaguered Music Master, and Tony Stevenson, one of the Met’s finest and most prolific comprimario tenors (more than 600 performances in 44 operas), was a stand-out in the vocally challenging role of the Dancing Master. Michael Devlin brought crystal-clear diction and dramatic flair to the speaking role of the Major-Domo, and James Courtney, a veteran of over 1,800 Met performances, played the Lackey with dry humour as he escorted an Officer (debuting tenor Noah Baetge) to Zerbinetta’s dressing room and bandied words with the Composer. Violeta Urmana and Robert Dean Smith as the egotistical Prima Donna and Tenor also contributed effectively to the chaotic atmosphere in the ‘Prologue’ as each urged cuts in the other’s part in the ‘Opera’, but their best singing came later when they appeared as Ariadne and Bacchus. 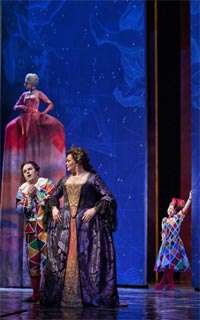 During the minor-key overture to the ‘Opera’, Met Titles translated the back-story of Ariadne’s abandonment on Naxos from the German text that appeared on a huge scrim. The trio of white-wigged nymphs glided across the nearly bare stage on tall carts decorated as formal gowns, towering over Ariadne and lamenting her fate in sombre tones that were echoed by the princess herself (‘Ein Schönes war’). Strauss’s score undergoes sudden changes in mood as the plot of the opera-within-the-opera shifts among mournful, comedic and romantic episodes. When the comedians arrive, their first attempt to brighten Ariadne’s mood is Harlekin’s tuneful serenade sweetly sung by Vasili Ladyuk, whose musical phrases are wordlessly repeated by, appropriately enough, Echo, but make no impression on Ariadne.

The vocal highlights came in extended monologues by Ariadne and Zerbinetta in the middle portion of the ‘Opera’. First, Ariadne longs for the purity and salvation that will come only in the land of death. Urmana was every bit the princess in this impassioned outpouring of despair and hope, her voice powerful and clear across the wide range that Strauss’s music traverses. The jocular singing of the garishly costumed troupe provides comic relief, but when it fails to alter Ariadne’s solemnity Zerbinetta offers woman-to-woman advice in a brilliant coloratura recitative and aria (‘Großmächtige Prinzessin!’). Don’t worry about being abandoned by a lover, she counsels, for all men are faithless to women; another will come along soon enough and captivate you like a God. Kathleen Kim’s physical agility matched her brilliant vocal pyrotechnics. When Ariadne, not consoled by the comedienne’s advice, withdraws into her cave, the troupe enacts an entertaining scene in which the men compete for Zerbinetta’s affections, with Harlekin winning out.

The mood changes yet again as the nymphs, accompanied by fanfares, announce the approach of Bacchus’s ship, recounting the demi-god’s escape from the sorceress Circe and his progress toward Naxos. As Bacchus’s voice is heard in the distance the nymphs sing a lullaby to Ariadne who at first mistakes him for Theseus, and then as a welcome messenger of death. Bacchus is at once enamoured of Ariadne and explains that he is a God and would sooner see the stars disappear than give her up. Singing Bacchus, with its extremely high tessitura, is not unlike performing on a high wire without a net. Smith, who is making his first regularly scheduled appearances at the Met (after substituting for an ailing Ben Heppner as Tristan three years ago), has the Heldentenor voice that the role requires, and he sang quite well, although with perhaps a bit less of an exciting edge than one might wish for. Zerbinetta returned briefly to point out that her advice to Ariadne had proven sound, and Urmana and Smith sang rapturously in the duet that brought the performance to a majestic close.

Throughout this ingenious score, themes representing particular characters and events in the Ariadne myth are interwoven, and particular instruments are used to identify certain characters. For example, jaunty piano figures are associated with Zerbinetta and her Dancing Master, and harp arpeggios with the Prima Donna. The harmonium punctuates allusions to the opera seria in the ‘Prologue’ and then harmonises Ariadne’s lamentations in the ‘Opera’, and the celesta adds a delicate, sparkling touch to the Composer’s hymn to music in the ‘Prologue’ and later accompanies Bacchus in the final portion of the ‘Opera’. Luisi was masterful in guiding the singers and chamber orchestra smoothly through these intricacies.