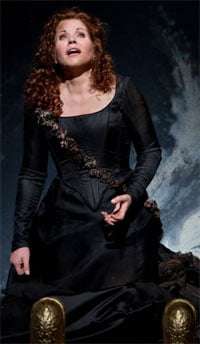 After its Met premiere last year, Rossini’s “Armida” (1817) returns this season as a vehicle for Renée Fleming. Based upon Torquato Tasso’s tale of the first crusade, “Gerusalemme conquistata”, one of the literary highlights of Italian Renaissance, the opera focuses on the tale of a Damascan princess who tries to use her magical powers to seduce and thus render harmless the crusaders who are on their sacred mission to recapture the holy grave of Christ. The brave Rinaldo succumbs to Armida only after she works her magic upon him and transports him to a bewitched island of pleasure. Not satisfied to hold Rinaldo by magic alone, she releases him from her spell in the hope that he would return her love. But his compatriots discover his whereabouts. With the aid of a magical golden staff, they ward off the demons, defy Armida’s desperate attempt to hold on to her lover, and remind Rinaldo of his sacred mission. Torn between love and duty, Rinaldo abandons Armida to follow the knights, leaving her to seek revenge.

Mary Zimmerman’s production goes to great lengths to transform what was intended as an opera seria into a comic fantasy, presumably on the assumption that audiences could not possibly take the storyline seriously. A young seraphim, representing Love, holds up placards in Italian that are apparently intended to advise us of where we are in the narrative, which functions here as camp. During the opera, Love wields her bow and arrow at the wave of Armida’s magic wand (a concession to Harry Potter fans?) to cast a spell on the unsuspecting Rinaldo. In Act Two the bare walls of the pleasure palace are decorated with enormous birds and insects that seem better suited to a fairy-tale opera designed by Maurice Sendak. The extensive ballet with which this Act ends is the ultimate in kitsch. Nymphs clothed in red greatcoats performed ludicrous movements in mimicry of a military march. Demons followed wearing chiffon tutus! Although the ballet is a representation of Rinaldo’s seduction, it comes off more as slapstick. These frivolities make it difficult to take the conflict between love and duty that follows in Act Three as anything more than merely superficial or inauthentic. 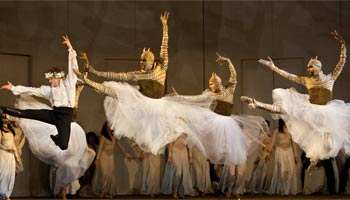 A consummate actress Renée Fleming captivated from the moment she first removed her mask in Act One. As she has rightly suggested, “Armida” the opera is primarily about the art of seduction, so her come-hither smile and coquettish mannerisms not only charmed but made it abundantly clear that she was in complete control of the situation. But when Armida tempts fate by freeing Rinaldo from her magic spell, she no longer dominates him or, for that matter, anyone else. When she loses him her thirst for revenge has no bounds. Fleming was as convincing a seducer as she was a shrew. But having lost some of the capacity, sheen and agility that she displayed in her recording of the work, she was forced to proceed with caution. She seemed to hold back slightly during her extensive aria on the power of love, ‘D’Amore al dolce impero’, which precedes the Act Two ballet. Only in the final Act, which makes fewer technical demands, did Fleming use her full voice in what was a compelling performance.

Of the six tenors, only Lawrence Brownlee, as Rinaldo, stood out. His lyric voice has little difficulty negotiating the taxing scales that rise to extreme heights. His duet with Armida in Act Three was impressive and his ardent song of remorse in the same Act stole the show. Riccardo Frizza led a rather temperate performance, perhaps in keeping with Fleming’s watchful approach. Rossini’s allegros did not sparkle as they should, especially in contrast with slower, more lyrical passages. It may have been a mistake to rely on cutesy staging to try to make this rarity a success.

Some video clips of The Met’s “Armida”: