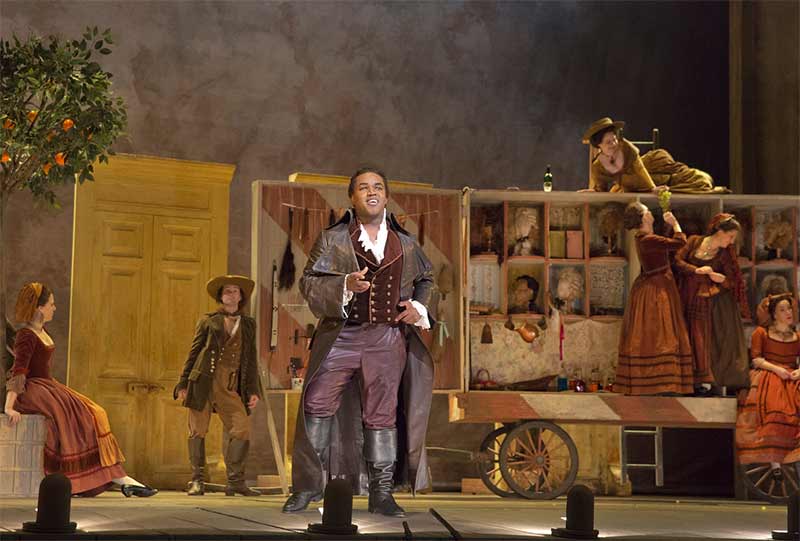 This was the first night of the Metropolitan Opera’s fourth revival of Bartlett Sher’s 2006 production of Rossini’s The Barber of Seville, among the most beloved in the Met’s repertory. This was Sher’s first production for the Met, where he has since become a regular, with four more productions – Les Contes d’Hoffmann (2009), Le Comte Ory (2011), L’Elisir d’Amore (2012) and Two Boys (2013), teaming each time with Michael Yeargan and Catherine Zuber.

Sher makes no attempt to depict the opera as taking place in Seville – or any other locale – and only Zuber’s attractive costumes give anything of a period look. Yeargan’s simple yet functional set-design keeps the stage open and airy, the space shaped and reshaped by manipulation of a number of framed doorways and orange trees (a hallmark of Seville) in movable planters. Each doorway can serve as the entrance to a house, collectively they can define a street, and they also are used to identify and separate rooms within Dr Bartolo’s residence. When called for by the plot, a section of grilled fencing or a doorway with a balcony above and a stairway behind is provided. 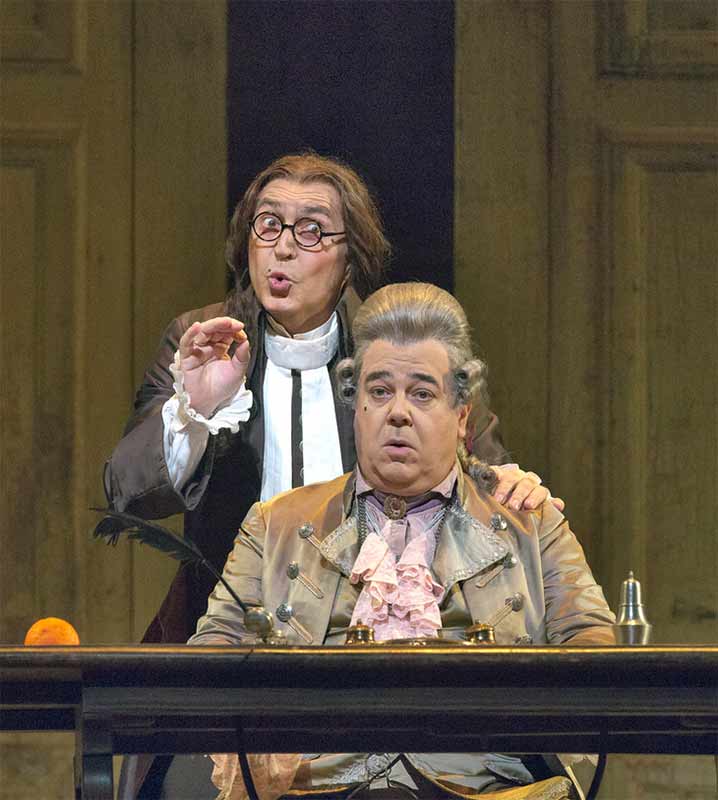 Sher also uses these components as the basis of sight gags. Thus, when Figaro needs a guitar, he just opens a door and one is handed to him. And, after Don Basilio has been hustled out of Bartolo’s dwelling without being allowed to pick up a coin from the floor, he easily pries apart the bars of what appears to be an iron fence, allowing him to step through it to collect the bauble. The most unusual aspect of the set is the use of a passerelle – a runway that surrounds and partially covers the pit – allowing the singers to come forward of the proscenium. This has the effect of enhancing their vocal and physical presence, but at the cost of muting the orchestra’s sound somewhat. The Met Orchestra nevertheless played well under Michele Mariotti, adept at shaping phrases and holding together the numerous complex ensembles.

As Figaro, Christopher Maltman exuded the self-assured charm that enables the barber to win the confidence of everyone he encounters, and to manipulate and outwit them. Maltman’s comic timing was terrific, his facial expressions marvelous, and his hands in constant motion as they ran through a gamut of emotions and commentary on everything and everyone. Figaro entered atop his shop, a large cart pulled-on by a complement of beautiful young women assistants and which opened to reveal a stock of wigs and tools of the barbering trade. Introducing his character delightfully with ‘Largo al Factotum’, and throughout the opera, Maltman’s strong, polished voice was equally adept in Rossini’s lyrical and patter-laden passages. Figaro’s scheming to win Rosina’s hand for Count Almaviva was ultimately successful, but at each of the many twists and turns along the way, Maltman conveyed perfectly Figaro’s frustration and exasperation with those less clever than he. 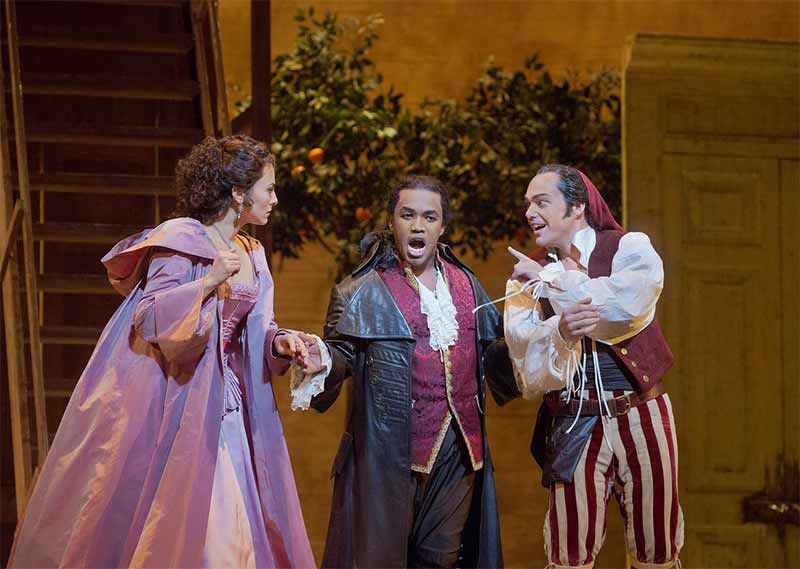 Lawrence Brownlee’s light, flexible tenor is well-suited to the demands of Rossini’s score. Brownlee was hilarious in the scenes where Almaviva is disguised, first as a drunken soldier whose inept swordplay surprisingly chops down a tree, and later as the supposed music teacher Don Alonso, who manages to court Rosina almost under the nose of the dozing Bartolo. Brownlee’s voice seemed to relax and open up as the evening went on, and ‘Cessa di più resistere’ was the vocal highpoint.

Isabel Leonard was an excellent Rosina, her lithe mezzo having both the agility and the solidity the role requires. Her characterization matched perfectly the heroine’s self-description in her beautifully ornamented ‘Una voce poco fa’ as a refined, clever young woman who knows what she wants and is determined to get it. She gave a convincing account of Rosina’s vindictiveness when she believes that Lindoro is deceiving her.

Maurizio Muraro’s booming basso rattled off Bartolo’s rapid patter in ‘A un dottor della mia sorte’ with ease, and his comic acting was impeccable, particularly in reacting to Almaviva’s annoying alter egos. Although the villain of the piece, he came across in the end as more of a foolish old man reconciled to accepting that his affection for Rosina would have to be avuncular rather than spousal.

Paata Burchuladze was excellent in Don Basilio’s great ‘La calunnia è un venticello’, singing from the passerelle at its climax, thereby augmenting its cannon-like impact. Claudia Waite as Bartolo’s snuff-taking housekeeper, Berta, sneezed her way through the opera and was in fine voice. Dancer Rob Besserer was extremely funny in the (almost) silent role of Bartolo’s servant, Ambrogio, who appears as shocked as the audience when he utters his single word, “Basta!”. Most of his sight-gags still work well, and some felt so fresh as to make me wonder whether they had been added since I first saw him in this production some seven years ago.

I do, however, have minor quibbles with the comic business that opens and closes Act One. The pantomime that accompanies the concluding portion of the Overture is a needless distraction from the music, and it is both figuratively and literally over-the-top to have an enormous anvil descend from the flies and crush a produce-laden cart as the singers – ignoring Ambrogio’s wild gesturing – complain of having headaches like a hammer on an anvil. During that setting, and again in the opera’s final scene, Christopher Akerlind’s lights the stage and auditorium so brightly that the titles were difficult to read.

On the whole, Sher’s production has remained fresh and vibrant after eight years, four revivals, and over fifty performances.