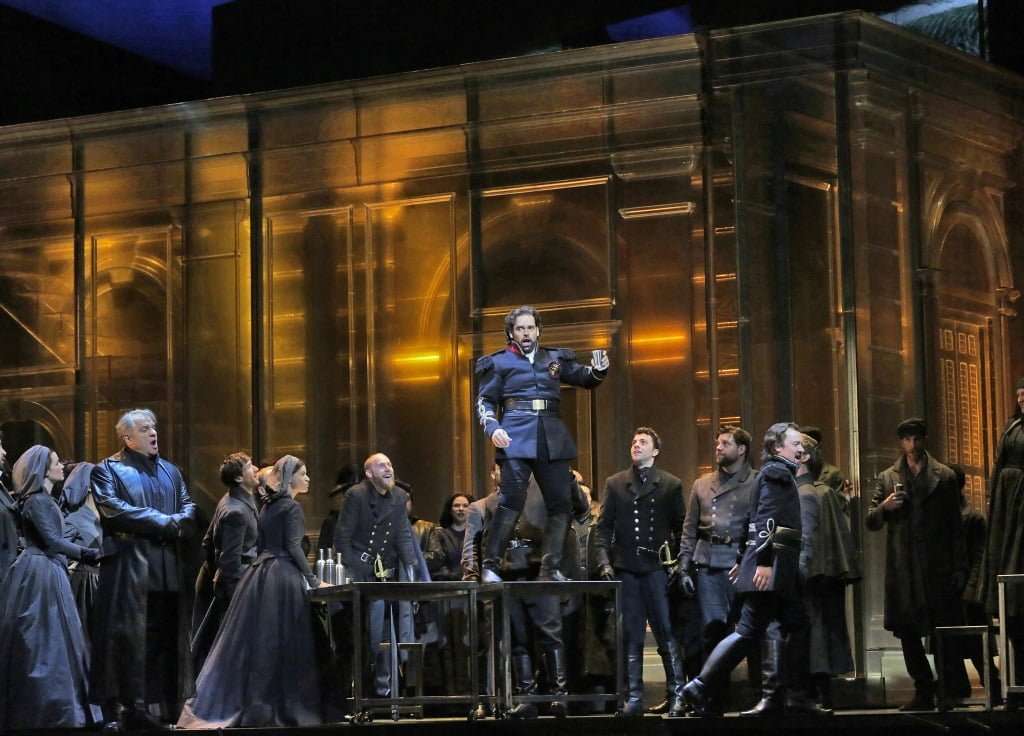 This second performance of Verdi’s Otello, which has opened Metropolitan Opera’s 2015-16 Season, benefited from a strong cast and an enthusiastic conductor, Yannick Nézet-Séguin. Bartlett Sher updated both the design (what there was of it) and costuming from the fifteenth century to the late nineteenth, when Verdi wrote the score. Befitting the tragic nature of the drama, the stage was enveloped in black and gray, as were the costumes. Only the vibrant red of Desdemona’s ball-gown during Act Three, mirrored by the sudden illumination of a palace building in the same color, interjected something extra into the otherwise gloomy aura. A stark red and black contrast set off Desdemona as if in a prophetic vision of her death.

In a rather simple set design, mobility trumps decorativeness for quick and easy scene-changes between and within Acts. So in the first, when the Cypriots celebrate the return of their heroic prince, a mock-tavern setting consisted of easily-movable long tables and benches reminiscent of a student lunchroom. For the next two Acts, three massive buildings created out of glass-like material to make them almost transparent, enabled us to view Iago and Otello as they spied on Desdemona and Cassio. The final Act took place in a sparely furnished boudoir illuminated by a single candle that Otello snuffs out when he enters with murder in his heart. 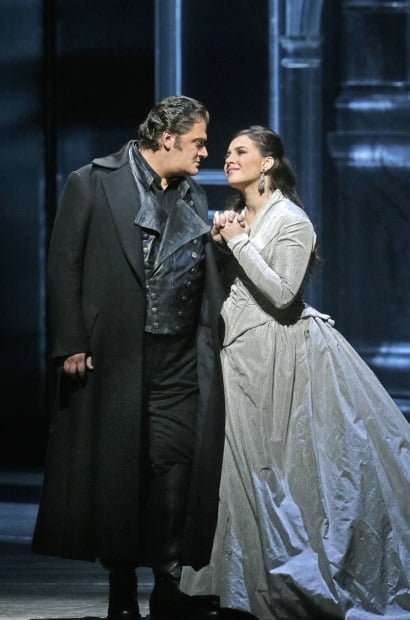 In a break with tradition, Otello’s blackface makeup was eliminated. Even if his comment that Desdemona might have strayed because of his “Moorish looks” seemed inconsistent under these circumstances, today’s revisionists rarely concern themselves with such mundane matters.

During the opening storm scene, flashing lights filtered through multilayered scrims and blinking strobe-lights momentarily lit up dense storm clouds moving vigorously through the dark, threatening sky, as if anticipating the catastrophe to come. Yet the Chorus seemed virtually unaffected by the storm or the dangers it created for Otello’s landing ashore. The singers simply stood still throughout much of the tempest, letting their desperate cries for their hero’s safe landing suffice.

Otello’s magisterial entrance and his stentorian “Esultate!” made us well aware that we may be witnessing the making of another great singer of this role. Aleksandrs Antonenko has a tenor voice of enormous power. His delivery was forthright and demonstrative if occasionally faltering in pitch. His robust chest tones and the intense passion, which he projected in the throes of his raging fits of jealousy, were impressive. His scenes with Iago in Acts Two and Three revealed a forceful persona debilitated by his insecurity about Desdemona’s fidelity. Both his poignant farewell to heroic accomplishments in ‘Ora per Semper addio’ and his adamant resolve to seek revenge in his duet with the wily Iago (‘Si per ciel’) in Act Two resonated with riveting intensity. Although Antonenko seemed more convincing when overwhelmed by raging fury than when softened by Desdemona’s charms, his loving duet with her that ends Act One was quite beautiful. 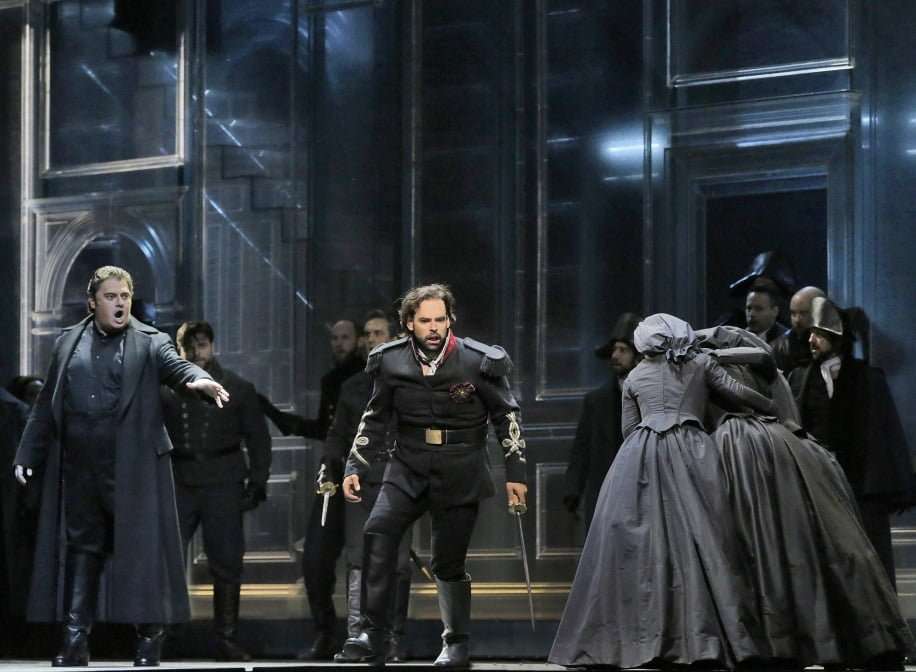 Sonya Yoncheva’s Desdemona seemed curiously vulnerable from the outset, as if she was subconsciously concerned about her marriage to Otello, who is different from her in so many ways. By the end of the third Act she undoubtedly realized what fate had in store for her. Yoncheva has a lustrous, vibrant voice, which enables her to answer Otello’s suspicions with commanding assertiveness. Yet her angelic tenderness and heavenly high notes in both the ‘Willow Song’ and ‘Ave Maria’ prayer in the final Act were simply sublime.

No production of this opera would be a success without a strong characterization of Iago, whose manipulative wiles cause Otello to forego trust for maniacal jealousy, thereby destroying all those around him and eventually himself. Željko Lučić gave an incisive portrayal of a character who is the very personification of evil. He deftly combined the sneering arrogance of Mephistopheles with the faux humility and subservience of Uriah Heep, not overly malevolent or even embittered by his having been passed over for promotion. Given the unmitigated cynicism and nihilistic philosophy he utters in his ‘Credo’ in Act Two – forcefully sung – it is no wonder that when it is over he shrugs it off as no more meaningful than the importance of those he seeks to undo.

Nézet-Séguin gave a clear, seamless and often powerful account, in a symphonic approach that added measurably to the importance of the orchestra, which he never let overpower the singers, but gave them a firm foundation in such intense scenes as those between Iago and Otello. Yet toward the end of the Act One love-duet, the conductor’s sensitive treatment of the soft sustained harmonies over which the harp intones rising arpeggios evoked the magic of a moonlit night suffused in heavenly bliss. It would be Otello and Desdemona’s last embrace before Iago’s poison slowly and subtly does its worst.

Just before Otello appeared in the final Act to do the unwarranted and unforgivable deed, Nézet-Séguin set the scene with a mysterious aura. After the murderous deed was done and the truth revealed, causing Otello to end his own life, the music slowly faded into oblivion. The audience, so moved, waited for a moment before bursting into enthusiastic applause.