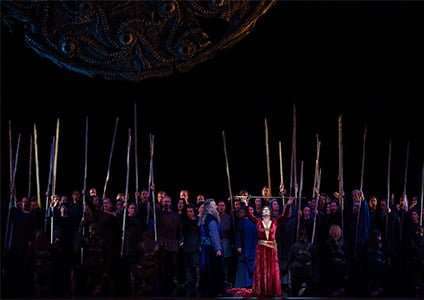 Vincenzo Bellini’s Norma has a storied place in opera repertoire as one of the most challenging soprano roles. Maria Callas sang the part 89 times, including her Met debut in 1956. A prime example of bel canto opera, Norma demands beautiful legato phrasing that sometimes scurries across a wide tonal and dynamic range in one seemingly eternal stretch.

Sondra Radvanovsky enchanted as Norma in the Met’s sensitive staging. Her sumptuous, full-bodied voice often overshadowed Kate Aldrich and Aleksandrs Antonenko, but one came away with deep sympathy for all the characters, whose love-triangle ends, of course, in tragedy. In particular Aldrich, as the young priestess Adalgisa who is devoted to high priestess Norma, compensated for her smallish voice with expressive moves that conveyed her vulnerability and endearing honesty.

Set in 50BC, the narrative begins with Norma’s father, Oroveso, leading a group of Gallic priests in calling for revenge against the occupying Romans. Norma enters to warn the druids against hasty action and prays to their moon-goddess for peace. Radvanovsky’s melodic purity and unwavering endurance made the aria ‘Casta diva’ truly memorable during which the Metropolitan Orchestra strings provided soft and sensitive arpeggio accompaniment. Her rich and robust voice, commanding at the start, fell swiftly back to utterly soft and gentle tones as Norma implores her goddess to “bathe this scared place in thy silvery light” and “soothe these burning hearts.” So sublime were her vibrato, glissandos, ornamental flourishes and agility that only the occasional dramatic high note broke her hypnotic spell. 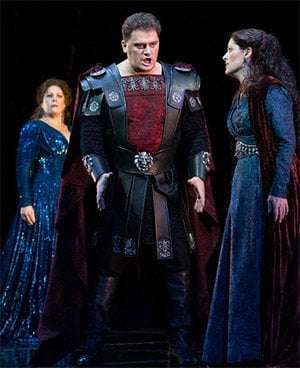 Norma’s trembling invocation hides another layer: She has secretly borne her Roman lover, Pollione, two children and fears his being harmed if there is a revolt, an agony that comes across in vocal leaps and bounds. But Pollione has secretly fallen in love with Adalgisa, and the two agree during a duet (Vieni in Roma, ah! vieni, o cara’) that Adalgisa will renounce her vows and accompany him to Rome. What follows is a gorgeous duet (‘Sola, furtiva, al tempio’) in which the guilt-ridden Adalgisa confesses to Norma that she’s fallen in love and asks to be released from her vows. Norma’s compassion is aroused as she recalls her own forbidden affair, and in such tender moments Radvanovsky’s voice again showed its immense beauty. It glided effortlessly to high notes and did not waver for stupendously long stretches, ringing with lightness and clarity.

Despite the gap in their vocal strength and volume, the female leads were stirring when singing duets. Their characters wrestle with feelings of guilt and longing over love, until Norma learns that Pollione is the object of Adalgisa’s affection. Compassion turns to fury, and when Pollione appears, a trio ensues (‘Oh! Di qual sei tu vittima’). He asks Adalgisa again to go with him to Rome; she says she’d prefer to die than steal him away from Norma. Here Aldrich’s voice, lacking volume, tended to get lost and Antonenko continued to seem stiff and his voice one-dimensional. It wasn’t until the end of Act Two that he came to life.

In that second Act, Norma’s torment continues as she contemplates killing her young sons and decides instead to ask Adalgisa to marry Pollione and flee with him and the children to Rome. The women share a touching and emotional duet (‘Mira, o Norma’) in which Adalgisa refuses to take Pollione and vows instead to persuade him to return to Norma. Meanwhile, the druids come together and learn from Oroveso that Pollione will be replaced with a new Roman commander. Norma finds out that Pollione has refused to return to her despite Adalgisa’s pleas, and just after he is brought before the druids who are demanding a sacrificial victim, Norma offers to free him if he abandons Adalgisa and stays with her. He refuses. She threatens to kill him, their children and Adalgisa – and only here, as Pollione begs Norma to spare Adalgisa, did Antonenko’s voice become fuller and expressive. To everyone’s surprise, Norma – in the softest voice – declares herself a traitor and that she will go to the pyre. Her noble action moves Pollione to rejoin her and together they are led to their deaths.

The production by John Copley is noteworthy for its evocative simplicity and ambience. The somber, shadowy atmosphere of John Conklin’s sets are punctuated with simple, graphic elements: a large, hovering orb – the moon in some scenes, a striking stone-like disc in another – and long, glinting, silver rods with sharp points that accentuate the druids’ battle-hungry mood. Through color and texture, Norma’s dresses single her out on the mostly charcoal stage palette, as well as convey mood: a stiff, shiny cobalt blue when she leads as high priestess, soft orange as forlorn mother, and deep red as furious lover in the end.