Mussorgsky
Boris Godunov – Opera in a prologue and four acts to a libretto by the composer based on the play by Alexander Pushkin [1875 version with additions from the 1869 score; sung in Russian with English, German and Spanish Met Titles]

The Orchestra of the Metropolitan Opera
Valery Gergiev 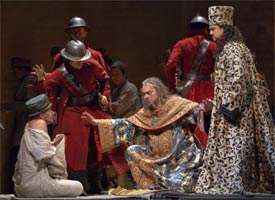 While any new production at the Metropolitan Opera is a special event, René Pape’s Met debut in the role and a change of stage director three months before the opening created a heightened sense of anticipation for “Boris Godunov”. The German Peter Stein and his production team supposedly had completed work on the sets, the 600 costumes and worked out his ideas for stage action when he withdrew due to the humiliation and difficulties he had faced in obtaining a US work visa.

Steven Wadsworth, who had directed Handel’s “Rodelinda” and Gluck’s “Iphigénie en Tauride” at the house was called upon to take over, in what should properly be called ‘The Peter Stein Production – Steven Wadsworth, Stage Director’. Once the major elements had already been put in place – fairly traditional costumes pitted against abstract scenery of descending flat panels and minimal props – his major contribution was directing the action itself, which he did brilliantly. 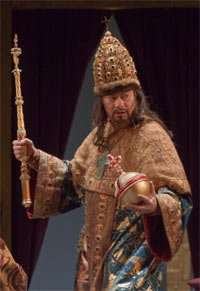 Starting from silence and darkness he has Boris meet the Holy Fool at the very beginning, an inspired touch. Graphic depictions of the brutality of the Streltsy police at the opening, and the frenzy of the mob at the end, highly detailed tableaus instead of mere crowd scenes, illuminate the dichotomy between the starkness of Stein’s mise-en-scène and the vitality of his staging. The Metropolitan Opera Chorus could have used a few more men, especially dark basses, but especially in Act Four it sang and acted with great passion.

The stage is often dominated by huge, flat backdrops descending from above to create changes of scene. In Act Three rows of square columns are used to suggest a castle. And there are the props – a multitude of bells hanging from the ceiling for the ‘Coronation Scene’, a huge chronicle lying on the floor of Pimen’s cell, Feodor’s immense map. However, in Wadsworth’s staging this opera ultimately is much less about monumental spectacle than psychological drama.

From the outset Boris is guilt-ridden over his part in having Dimitri, the heir to the throne, killed, and he inexorably progresses to total mental disintegration and death. René Pape not only has a glorious, sonorous voice, but is also a consummate artist, musically and dramatically. A tall, imposing figure, his Boris emerges in turn as a guilty man, a tender father, and an insecure ruler. After Pimen recounts the miracle of the blind man cured at Dimitri’s grave and brings him to breaking point, Pape delivered a breathtakingly gripping and chilling final scene of descending into despair and death. 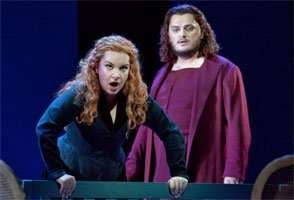 Only then did Valery Gergiev seem fully engaged, supplying as much drama in the pit as there was on the stage. Up to that point he had led a beautiful, detailed, but somewhat understated performance, with numerous minor coordination problems between singers and orchestra. Although the Metropolitan Opera Orchestra played gorgeously, the emphasis seemed to be on creating an intimate atmosphere with Mussorgsky’s often chamber-music-like orchestration. However, without much underlying dramatic tension it tended to sag at times, especially during Act One; after an hour and forty minutes the first interval was welcome.

Mussorgsky’s revised 1875 version is used, with here the interpolation of the St Basil scene from the 1869 score. Overall, including intermission, the opera runs to four hours and twenty minutes. Making the most of the additional scene, Andrey Popov gave a very convincing and well characterized portrayal of the Holy Fool. He was but one of several noteworthy singers in minor roles, among them Nikolai Gassiev as Missail, Vladimir Ognovenko as Varlaam, a resonant Alexey Markov as the boyar Shchelkalov, Jennifer Zetlan as Xenia, Boris’s daughter, and a very impressive boy soprano, Jonathan A. Makepeace, as Feodor, Boris’s son.

In the only female leading role, Marina, Ekatarina Semenchuk produced a rich, round sound, and she convincingly portrayed the scheming Polish noblewoman. Equally effective was Mikhail Petrenko in the role of the stately monk Pimen, and Oleg Balashov gave a vocally and dramatically gripping portrayal of Prince Shuisky. As Grigory, who would become the false Dimitri, Aleksandrs Antonenko proved himself a worthy counterpart for Pape. Although his acting isn’t quite as convincing yet, his voice has everything one could wish for – a ringing core, projection, and ease in the high register; he stands poised for a major career as a dramatic tenor.

Some video clips from the Met’s “Boris Godunov”: