Britten
A Midsummer Night’s Dream – Opera in three Acts to a libretto by the composer & Peter Pears, adapted from the play by William Shakespeare [sung in English with Met titles by Sonya Haddad] 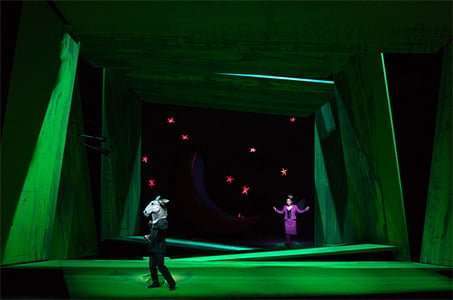 The Metropolitan Opera is commemorating Benjamin Britten’s centennial with its first revival in over a decade of Tim Albery’s charming 1996 production of A Midsummer Night’s Dream, with James Conlon conducting and an outstanding cast in a captivating performance of this adaptation of Shakespeare’s play. (The Met also gave three performances of the composer’s Billy Budd last May.)

To adapt Shakespeare’s play to the operatic stage, Britten and his life-partner and artistic collaborator, Peter Pears, had to reduce its dialogue by about half to bring it down to manageable size – this performance ran nearly four hours (including intervals) – without losing the thread of its three interwoven plot lines. They accomplished this by eliminating the play’s first Act entirely, inserting just six words into what is otherwise entirely Shakespeare’s text to explain that Hermia was under legal compulsion to marry Demetrius, and by re-ordering several scenes to defer the appearance of Theseus and Hippolyta until the final Act. They also reassigned a few lines to create a better balance among the characters, and made some judicious cuts. The result is remarkable, first and foremost in retaining both the beauty of Shakespeare’s words and the cleverness of his plot, as well as in emphasizing the interrelationships of love, sleep and dreams and the enchantment of the woods in which nearly the entire opera is set. 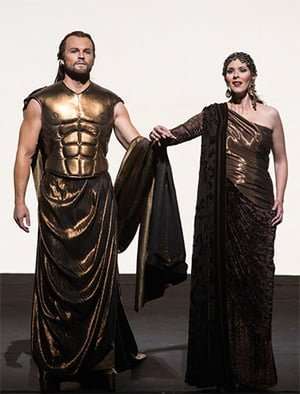 Conlon and the Met Orchestra brought the atmospheric score to life brilliantly. Eerie string glissandos in Act One made the woods dark and mysterious, with harps, harpsichord, celesta, percussion and children’s voices characterizing the milieu of the fairies. Romantic strings and woodwinds accompanied the four Athenian lovers, and low winds and brass portrayed the rustics. Snare drum, and ornate trumpet solos by Billy R. Hunter, Jr., accentuated Puck’s energetic movements.

Albery’s production combines lively staging with sets by Antony McDonald that are neither realistic nor completely abstract. The raked stage thrusts forward through a frame that serves as a proscenium, drawn in outlines of white on black in Act one, and then solid green in the succeeding Acts. We encounter the mortals at first in front of a somewhat naturalistic hillside, but then the set slides from left to right to reveal a series of parallel walls, with doorways connecting the spaces between them, representing the woods, all pierced high above by a long tree branch. Later, when the set slides still further, a large crescent moon, lying on the ground as if cut out from the star-studded backdrop, serves as Tytania’s bed. Only in Act Three does the action move indoors to the Duke’s palace, where there is a stage on which the rustics give their performance of “Pyramus and Thisbe”.

McDonald’s costumes are something of a mixed bag. He dresses Oberon and Tytania in rather modern, brightly colored clothing – he in a lime green jacket and baggy-cuffed trousers and a hot pink vest, she in a grape-colored dress suit and silver tiara, necklace and star-shaped buttons. Later, she changes into a floor-length midnight-blue dress, and for the final scene both she and Oberon wear sequined costumes that present them in full regalia, she in a hoop skirt and he with panniers and tails. They, Puck (who is dressed in dark coat and trousers) and all the queen’s fairy attendants sport large black wings that miraculously manage not to get in anyone’s way. The four lovers wear loosely fitting garments that – appropriately at times – resemble nightshirts, but in the final scene they don more formal garments that, like those of Theseus and Hippolyta, are suggestive of ancient Greece. The rustics wear modern outfits with matching jacket and trousers in rather loud patterns – Bottom in a window-pane fabric with an ill-matching plaid vest, Flute in checks, Snout in a black and white tweed, and Quince and Snug in stripes. Fittingly, Starveling, a tailor, wears an outfit that has been marked with tailor’s chalk as if about to undergo alterations. In the play, Pyramus and Thisbe wear Greek peasant costumes, and the others are whimsically outfitted. 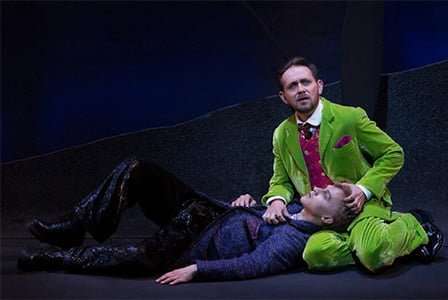 The opera takes full advantage of Shakespeare’s cleverness by making Puck’s mistaking Lysander for Demetrius turn what would have been a happy outcome for all four lovers into a vicious circle in which each is in love with another who will not have them and is pursued by yet another whose attentions are unwelcome. Oberon’s attempt to correct the problem by making Demetrius fall in love with Helena only makes things worse, as Helena becomes convinced that neither Lysander nor Demetrius really love her, while Hermia is left completely bereft. It is not until Puck applies the antidote to Lysander’s eyes that all can be set aright, thanks also to Theseus’s forgiveness.

Iestyn Davies’s countertenor resonated with sweetness and clarity as he emphasized the more sympathetic aspects of Oberon’s character, his bewitching of Tytania feeling more akin to Puck’s playfulness in turning Bottom into an ass than to any deep-seated malevolence. Moreover, it was Oberon’s generosity of spirit gone awry, thanks to Puck’s mistake, that drove the lovers further apart, complicating the already convoluted plot. Kathleen Kim was a sprightly Tytania, with a shimmering coloratura and sweet lyricism as she faced off against Oberon, made love to Bottom and finally reconciled with her regal husband after he released her from his spell.

Matthew Rose’s booming bass and keen comedic sense made Bottom’s efforts to take over all of the parts in the rustics’ play, his antics when wearing a donkey’s head, and his playing of Pyramus a tour de force from start to finish. Barry Banks, reprising his Met debut role of Flute, which he also played in the production’s 2002 revival, added brilliant turns, not the least of which was Thisbe’s mad scene, and Patrick Carfizzi, with strong singing and acting as Quince, ably led the band of rustics. Riley Costello, a young but already experienced Broadway actor, was terrific in the speaking role of Puck.

The singers portraying the four lovers – Elizabeth DeShong (Hermia), Erin Wall (Helena), Joseph Kaiser (Lysander), and Michael Todd Simpson (Demetrius) – were all outstanding, their voices blending beautifully in a fine ensemble when they awakened together in Act Three, or contrasting with one another as they argued vociferously in Act Two. Ryan McKinny (Theseus) and Tamara Mumford (Hippolyta) were striking figures as they celebrated their coming marriage by hosting the Athenians and enjoying the comic spectacle of Pyramus and Thisbe. Tytania’s four fairy attendants, costumed in tights with panniers and tricorn hats, sang well, as did the entire cohort of fairies played by the Met’s Children’s Chorus under Anthony Piccolo’s direction.