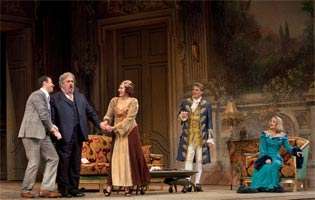 Sir Andrew Davis, who led the Met premiere of John Cox’s production of “Capriccio” in 1998, has returned for its first revival, with Renée Fleming leading the cast as Countess Madeleine. Joseph Kaiser as the composer Flamand and Russell Braun as the poet Olivier were the rivals for her hand, and Peter Rose portrayed the theatre director La Roche.

From the delicate string sextet that serves both as prelude and the beginning of the opera’s plot, right through to the Countess’s final contemplative monologue, Sir Andrew demonstrated his deep affection for this, Richard Strauss’s final opera. Davis was particularly skilful in guiding the orchestra seamlessly between the chamber music-like atmosphere of much of the opera and those passages that utilise the full force of the very large ensemble so typical of Strauss’s opera scores. Davis’s timing was unerring in delivering the orchestral punch-lines of many of the opera’s musical jokes, as well as increasing in volume just enough to all but obscure La Roche’s complaint about music drowning out a singer’s words. 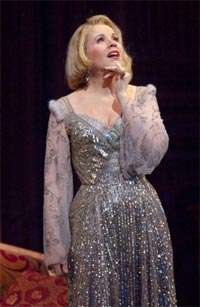 Fleming has portrayed the Countess in “Capriccio” numerous times, but the present run marks her first complete performances at the Met. (She performed the final scene at the opening-night gala of the Met’s 2008-2009 season.) Elegant in voice and bearing, she seemed quite comfortably at home in the sumptuous garden salon of her chateau, attended by her major-domo and servants, and the cynosure of attention and affection from everyone around her. Fleming’s singing was exquisite, particularly at the close when she contemplates, but does not resolve, the question of whether the words or the music is the most important element of musical drama – the topic that is debated throughout this “conversation piece for music.”

Joseph Kaiser sang with a rich, glowing tenor as Flamand, ardent in his advocacy of the primacy of music as well as in his romantic pursuit of the Countess. Russell Braun’s Olivier, complaining bitterly that Flamand’s musical setting had destroyed his sonnet, was more reserved, both dramatically and vocally, with Braun pointedly reining in some of the vocal power he has demonstrated at the Met as Rossini’s Figaro. Like Kaiser, Braun hails from Canada (though he was born and spent his childhood in Germany), the son of the late Canadian baritone Victor Braun whose Met career overlapped that of his son. 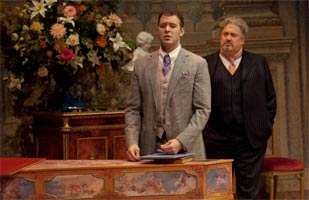 It was La Roche, strongly sung by the outstanding English bass Peter Rose, who seemed to have the best of the aesthetic argument that pervades “Capriccio” – words and music are both important, but realise their full artistic potential together as opera. Strauss based La Roche on the impresario Max Reinhardt, whose productions had inspired several of Strauss’s earlier operas, and Rose made him a fascinating and appealing character. His rendering of La Roche’s egotistical monologue, ending with his imagined epitaph and a solemn “amen”, was marvellous.

Morten Frank Larsen, making his Met debut in this role, was an engaging Count. His voice was warm and pleasant, with vocal power to spare, and his charm and handsome appearance made his character’s romantic conquest of the actress Clairon quite credible despite the Count’s lack of acting talent, which became evident as they rehearsed together. Sarah Connolly was outstanding vocally as Clairon and demonstrated a keen sense of comic timing, not only in reacting to the Count’s inept play-reading, but also in repeatedly dodging the ballerina who was set spinning and kicking wildly by Val Caniparoli’s choreography, sweetly accompanied by a trio of violin, cello and harpsichord. Equally entertaining was the ensuing duet by Olga Makarina and Barry Banks as the Italian Singers, who then helped themselves gluttonously to food and drink as the others discussed the programme for the entertainment that La Roche was arranging for the Countess’s birthday. Bernard Fitch was delightfully comedic as the prompter, Monsieur Taupe, and the servants’ octet, sung as they tidied up the salon after the departure of the guests, was also enjoyably humorous.

Robert Perdziola’s attractive costume designs and interior décor place the opera in the 1920s, rather than a century-and-a-half earlier in the time of Gluck’s innovations to the operatic form. References in the libretto to Gluck, Couperin, Rameau and Lully (with appropriate musical allusions) were left intact, however. Perdziola designed two new gowns for Fleming for this revival – one in a teal-coloured fabric with a fur-trimmed train, and the other silvery and shimmering in the moonlight of the final scene.


“Capriccio” videos from The Metropolitan Opera: