The Orchestra of the Metropolitan Opera
Edward Gardner 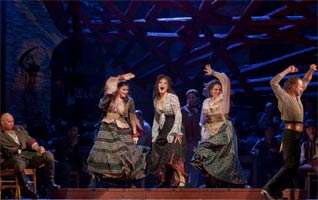 Richard Eyre’s production of Bizet’s “Carmen”, which premiered last New Year’s Eve, is back at the Metropolitan Opera for a ten-performance run in November and December, of which this was the fourth. Leading the cast were Elīna Garanča as Carmen and Brandon Jovanovich as Don José. Other principals included John Relyea as Escamillo and Nicole Cabell as Micaëla.

Garanča and Jovanovich were spectacular as the ill-fated lovers, singing with passion and power and setting sparks flying. This pairing generated much more sexual chemistry than when these two singers were cast opposite other performers last season – she with Roberto Alagna’s Don José, and he with Olga Borodina’s Carmen. 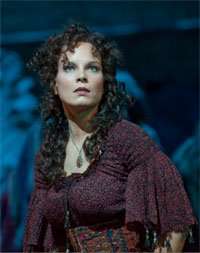 Garanča exuded sexuality in her beautifully-sung habañera (‘L’amour est un oiseau rebelle’) and in her seduction of Don José in the seguidilla (‘Près des remparts de Séville’) by which she entices him to allow her to escape. Gypsy spirit and fierce independence also pervaded Garanča’s characterisation of Carmen as she resisted the advances of Zuniga, Don José’s superior officer in the Guardia Civil, and of the matador Escamillo, and most notably in the fiery final duet (‘C’est toi! – C’est moi!’) in which she fearlessly allows José to take her life, thus fulfilling the destiny predicted for her by the fortune-telling cards. 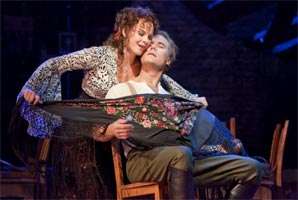 Jovanovich gave a sympathetic portrayal of a Don José torn apart by conflicting emotions. Nostalgia for his home village and his ailing mother came through in his ardent Act One duet with Micaëla (‘Parle-moi de ma mère’), and in each of his duets with Carmen his obsessive devotion to her was expressed, but in changing fashion as their relationship blossomed, then withered, and ultimately died. In his tenderly sung Act Two ‘flower song’ (‘La fleur que tu m’avais jetée’), Jovanovich demonstrated the clarity and beauty of his tenor voice, and the fatal duet between the desperate José and Carmen made for an utterly gripping conclusion to the opera. 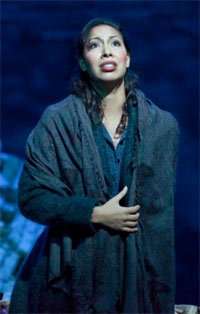 Nicole Cabell was a winning Micaëla, imbuing her Act One duet with Don José with a naïveté that contrasted with the darker and more complex emotions expressed in her Act Three aria (‘Je dis que rien ne m’épouvante’) sung as the frightened Micaëla sought José in the smugglers’ den. John Relyea was a rather aloof Escamillo, lacking much real electricity and seemingly offering Carmen little more than celebrity in his rivalry with Don José. Even the renowned ‘toreador song’ on this occasion lacked the accustomed powerful vocal resonance of this fine artist.

Keith Miller gave an outstanding performance, both vocally and dramatically, as Zuniga. Miller has quickly become one of the Met’s leading comprimario singers, having already given more than 170 performances in 19 different roles in just over four Met seasons. His superb bass voice, excellent musicianship and keen stage presence make each role he performs noteworthy, and should presage bigger roles in the future. Zuniga’s fellow-officer, Moralès, was ably sung by baritone Michael Todd Simpson.

The remainder of the supporting cast was also strong. The rapid-fire quintet (‘Nous avons en tête une affaire’), in which the smugglers Le Dancaïre (Malcolm MacKenzie) and Le Remendado (Scott Scully) try to persuade Carmen and her friends Frasquita (Joyce El-Khoury) and Mercédès (Eve Gigliotti) to join in their latest scheme, was particularly well done.

Edward Gardner, music director of English National Opera, is making his Met debut in this run. He led a spirited account of Bizet’s score, paying careful attention to detail and evoking precise playing from the Met orchestra. He took particular care to shape each of the orchestral passages that precede the opera’s four acts to establish the mood of the scene that it introduces. Christopher Wheeldon’s choreography also played an important role in this scene-setting function, with intense pas de deux danced by Maria Kowroski and Martin Harvey before the curtain rose on Acts One and Three, and a lively flamenco dance at Lillas Pastia’s tavern to start Act Two.

Richard Eyre’s production moves the opera’s setting to the period of the Spanish Civil War without interfering with the coherence of its plot and characters. Rob Howell’s huge rotating set works quite effectively to represent the Guardia Civil quarters in Seville, the adjoining city square, Lillas Pastia’s tavern, the smuggler’s mountain hideout, the outside of the corrida in Seville and, in a final tableau, the corrida itself, with Escamillo, sword drawn, standing over the slain bull. Howell’s colourful, period-appropriate costumes and Peter Mumford’s effective lighting also contributed strongly to the dramatic effectiveness of the production.

Some video clips from the Met’s “Carmen”: