The Orchestra of the Metropolitan Opera
Emmanuel Villaume 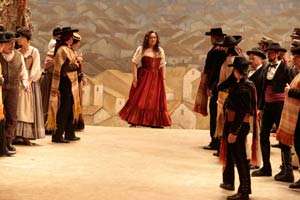 A blood-red curtain hung across the stage of the Metropolitan Opera House before the first act of Bizet’s “Carmen”. The color evoked appropriate associations for the opera – the blood of bulls and the lips of gypsies. With its Romantic themes of betrayed love and dramatic death, “Carmen” has the quintessential ingredients of an absurdly grandiose melodrama. But the opera also has surprisingly believable characters and moments of charmingly detailed realism. This production managed to balance the mundane and mythic elements to powerful effect.

The curtain rose on a bustling Seville market set against a backdrop of white-washed houses and blue sky. A dog, soldiers, donkeys and townspeople milled about. In addition to the high-resolution realism of the set, the flirtatious banter of the soldiers and the shy evasions of Micaela also intensified the feel of plausibility. Puffs of smoke even wafted from the cigarettes of the factory girls. Prefiguring the rest of the opera, the girls sang that the vows of lovers can fade as quickly as a puff of smoke. 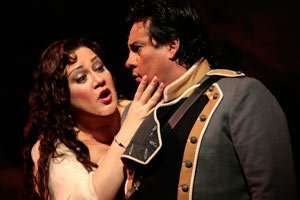 The first entrance of Nancy Fabiola Herrera’s Carmen was perfect – she dominated, the chorus curling and clustering around her in fluid throngs. Herrera (standing in for Olga Borodina, who had sustained an injury to her foot and was unable to perform), sang ‘L’amour est un oiseau rebelle’ with consummate sensuality; collapsed suggestively backward on a crate, and shaped the phrases with expert hesitations and bewitching grace. 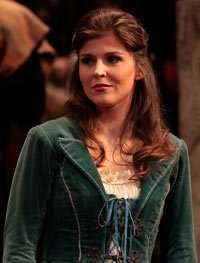 Micaëla’s first aria establishes her as Carmen’s antithesis: she’s all modesty and marriage and messages from mother. Don José, sounding far too excited about the prospect of a kiss from his mother, kisses Micaela as her proxy. Bizet uses their duet to show their compatibility musically – its sweet euphonies contrast starkly with the abrupt and combative later duets between Carmen and Don José.

Soon Carmen provokes a brawl and Don José is ordered to arrest her. Though he is ostensibly the one subduing and controlling her, the bodily cues of the leads made clear that their roles were actually quite the reverse.

Herrera is an engrossing actress as well as an expert singer. She flitted around with brazen energy, leaving besotted Spaniards in her wake. Yet however flagrantly sensual and athletic her motions, she never compromised vocal quality.

It’s clear from the beginning that Don José’s ardent love for a woman who is the incarnation of promiscuity is doomed. But Álvarez’s portrayal imbued the character with conflicted urgency as he vacillated between the poles of Micaëla and Carmen. His voice is a versatile instrument, capable of supreme tenderness in ‘Flower Song’ and of harsh rage and anguish in the final duet with Carmen.

The sets for Acts Two and Three were craggy mountain canyons and cliffs, complete with faint pricks of light from the glow of gypsy encampments. In Act Three Micaëla once again declared her love by talking about Don José’s mother, perhaps not the greatest aphrodisiac she could have chosen. And even the news that his mother is dying is not enough to lure him away from Carmen, whose charms cause her death at the hands of the jealous and enraged Don José.

The Orchestra could no doubt have played another “Carmen” in its sleep, but stayed awake. Emmanuel Villaume set lively tempos and elicited a lush romantic sound, full of vibrato but just short of schmaltz.