The Orchestra of the Metropolitan Opera
Edo de Waart 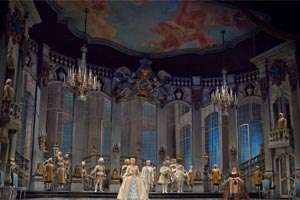 Edo de Waart has had a long association with “Der Rosenkavalier”, so the Metropolitan Opera’s announcement that the Dutch conductor was to fill in for James Levine (who is recovering from back surgery) was reassuring. Indeed, it’s now more than thirty years since de Waart led a Philips recording of Strauss’s opera. That set was a mixed bag, with Frederica von Stade’s lusty Octavian and Evelyn Lear’s aged-sounding Marschallin. And the result at the Met was mixed again. Edo de Waart imbued the action scenes with abundant energy, occasionally to a fault, as in Octavian and the Marschallin’s rather too frenetic lovemaking (at the opera’s commencement), while his refusal to linger in lyrical passages gave an impression of emotional coolness, which some may have found refreshing (I’d have preferred greater warmth). The conductor was at his best in the Viennese waltzes, to which he gave a delightful feeling of lift without the least hint of preciousness. The Met Orchestra played well for him – coordination between stage and pit was excellent throughout – though a little too loudly at times.

Miah Persson, making her Met debut as Sophie, was not entirely satisfying, either. The Swedish soprano was most convincing in her feisty exchanges with her father and Baron Ochs. At one point Ochs calls her a “spitfire”, and that was an apt description. Alas, tenderness and vulnerability were not Persson’s strong suits, and in her intimate scenes with Octavian she appeared aloof. Vocally, too, her tone can take on a cold, spiky edge where sweetness is required (as in the final trio and duet, for example). 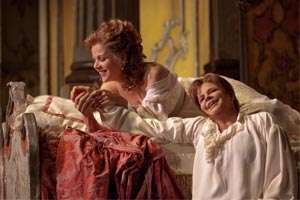 With Nathaniel Merrill’s production (now decades old) beginning to look more than a bit dowdy, it’s likely the full house at the third performance was due to the combined star power of Renée Fleming and Susan Graham. And they were, in fact, the brightest lights of the evening.

Fleming’s Marschallin has grown in depth and stature since she last sang it at the Met, some ten years ago. She was playful and ardently spontaneous in her scenes with Octavian; then, left alone with her thoughts, her bittersweet musings were delivered with subtle eloquence. What was most touching, perhaps, was the sense of loneliness she conveyed, for as Fleming made clear: it’s actually not the princess’s age that’s the issue (her voice remains fresh and deliciously creamy), but her isolation and sense of emotional disconnection from the sycophants who surround her.

Graham’s Octavian was ardently rash and full of boyish bravado, providing an excellent foil for Fleming’s elegantly radiant Marschallin. During the first intermission, I overheard an audience member complaining that Graham isn’t as masculine as some noted Octavians of yore (von Stade was mentioned). That may be true, but what a glorious voice Graham has, and how thrillingly she uses it. Her sound easily fills the huge hall, and her demeanor and intensity of expression are enthralling.

Kristinn Sigmundsson’s was a satisfactory Ochs. His voice is not especially distinctive, and he struggled to give body to some of the lowest notes. In Act One, he was not only a boor but a bit of a bore, as well. Arguably, this is exactly what Strauss intended, though some singers have avoided it (Otto Edelmann, for one). This may have been partly the fault of Robin Guarino’s stage direction, as it relied too heavily on broad slapstick comedy, thus making Ochs’s lecherous groping appear even more ludicrous than usual.

The smaller parts were generally well done. Hans-Joachim Ketelsen bowed and scraped while managing to maintain a modicum of respectability — though, vocally, he was often swamped by the orchestra. Wendy White gave Annina a Rossini-esque charm. Barry Banks, in the role of the Italian tenor, sang his aria stylishly, though his bright tone sounds slightly pinched in its upper register.