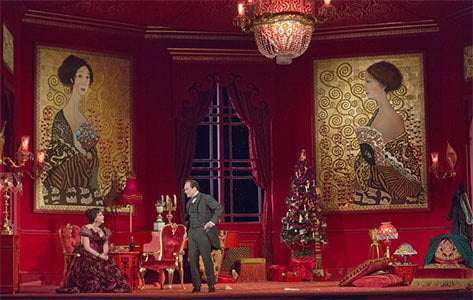 What better way to dispel the January blues than to attend an amusing and stylishly staged New Year’s Eve ball at the Met. Its new production of Die Fledermaus is guaranteed to entertain, regardless of what you think about its creative tinkers, which include spoken dialogue, English lyrics and a time shift from mid-nineteenth-century to fin-de-siècle Vienna.

As the audience arrives, a giant invitation hung on the curtain immediately sets the period aesthetic and festive tone. Elegant curls and a woman with a mischievous bat (the “fledermaus” of the title) grace the card announcing Prince Orlofsky’s ball. This production debuted on New Year’s Eve and loses none of the magic post-holiday. The sets by Robert Jones are simply stunning, starting with a plush red apartment room graced with Klimt-like portraits and drapes spilling alluringly off the edge of one corner. Adám Fischer led an energetic Overture, the Met Orchestra providing beautiful swaying themes from the violins and cellos, and with chimes evoking midnight bells. Musical chemistry was the evening’s other strength: the singers charmed with their bright and well-matched voices and playful ways that made you feel they were really having fun. Jane Archibald (now in all fourteen performances having replaced Christine Schäfer in the first six), especially, shined as the chambermaid Adele. Her high soprano sparkled with mirth in the show’s opening and lit up the stage whenever she appeared. 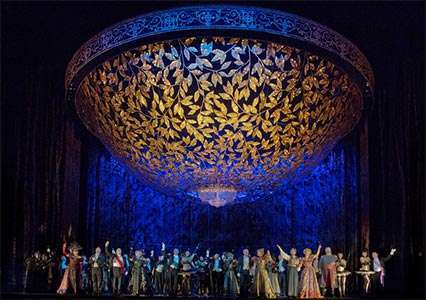 Jeremy Sams and his creative team deserve applause for reinventing this operetta classic, even with its one main misstep, the spoken dialogue. The idea of mixing talk with singing wasn’t the problem – in fact, they interwove nicely. It was even fine to hear joking references to Harry Connick, Harry Reasoner and the Family von Trapp in a story set in 1899. What fell flat – and badly so – was the dialogue’s dullness and wince-inducing humor. Things like “I’m drunk as a skunk but I smell like an after-dinner mint” (Frosch), and two “French” poseurs (Eisenstein and Frank disguised at the ball) stuttering “Alouette”, “Ménage à trois” and “Je m’appelle Barbra” to prove their nationality. The long spells of mundane talk sounded more dismal against the dignified poetry of the sung lyrics.

Sams and playwright Douglas Carter Beane intended to clarify some of the plot, but Beane’s dialogue does so to the point of tedium. The breathtaking revelation of Act Two’s ballroom set – with gauzy gold-and-blue banners, full-height gates and the captivating inversion of a gold-leaf dome from Vienna’s Secession building – is followed by a leaden, wordy stretch where Falke lays out his plot to Orlofsky (“It involves humiliating a guest, but in a most amusing way”). He then introduces every main character as they arrive – who they are, what they’re disguised as, and what mischief might befall them. Even though the singers embraced their spoken lines with as much verve as their songs, the dialogue’s literal and often repetitive points were a pin in the production’s giant balloon of energy and charisma. 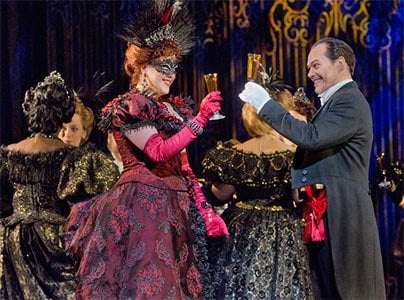 Fortunately the singing quickly overcame these curses. The diminutive countertenor Anthony Roth Costanzo lacked nothing in vocal power as the spirited prince. Patrick Carfizzi and Christopher Maltman amused as the fake Frenchmen leering after Adele (posing as a Russian actress) and a Hungarian countess who is in fact Eisenstein’s wife, Rosalinde. As the latter, Susanna Phillips charmed during her ‘Czárdás’, with strong trills of the tongue and defiant snaps of her fan. After a sublime descending glissando, her voice appeared to tire and she missed some pitches in the subsequent duet with Maltman, playing Rosalinde’s fawning and still-clueless husband. Phillips, however, was never without heart. The same held for Archibald, whose high notes thrilled and her second-act solo, with Russian accent as an actress named Olga, astounded with vocal spiccato. The ensemble singing, dramatic acting and splendid set combined with buoyant music and acrobatic dancing to create quite a party scene, complete with a chandelier drop during the countdown to New Year and a fabulous shower of gold glitter before the curtain fell.

After such revelry, and midnight not far off in real life, it’s hard to energize the crowd. But a peppy piccolo helped, as did Jones’s final set. It dazzled once again with a graphically bold jail interior reminiscent of Wiener Werkstätte’s straight lines and simple but stylish elegance. Danny Burstein, as the jailer Frosch, drew robust laughs with a monologue full of contemporary humor and even a swear word aimed at opera. Though his talking went on too long, Burstein was a skillful comic. At one point he stumbled off the raised set and quickly recovered with this ad-lib: “Don’t bother to read the back of your chair [referring to the Met subtitles]. This is really happening.”

Every so often Michael Fabiano’s beautiful tenor voice could be heard offstage, conveying the endearing idealism of Rosalinde’s ex- and would-be-current lover Alfred. More musical relief came when Adele and her sister Ida arrive at the jail to follow up on their mistaken belief that Frank, the prison warden, is a theater producer. Archibald’s solo was magnificent, full of life and depth. With few exceptions she nailed her high notes. Eventually the disguises are stripped away and the ballroom follies revealed as Falke’s attempt to get back at Eisenstein for a practical joke involving a bat costume. Eisenstein and Rosalinde reunite, and other characters gain new careers. It’s good to be reminded of the hopes for a New Year.