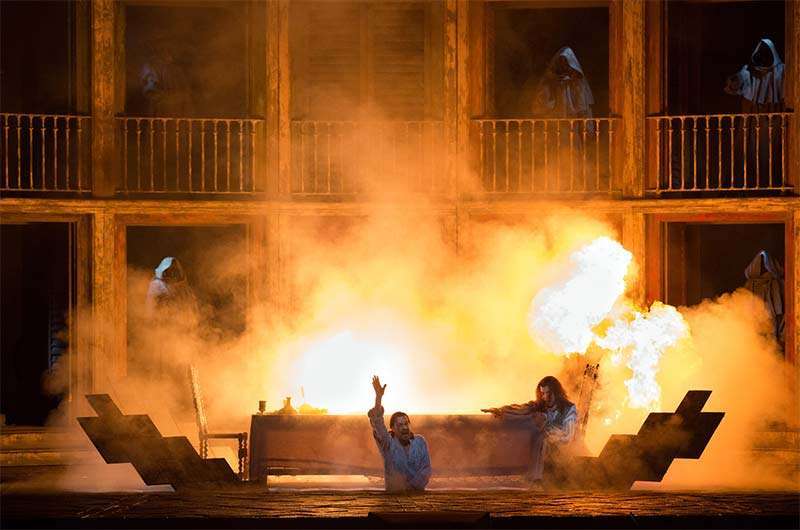 It was a bit of a disorienting experience to attend this season’s Metropolitan Opera premiere of Don Giovanni after just recently hearing The Tales of Hoffmann at the same venue. During the ‘Prologue’ of the Offenbach, in the story a performance of Mozart’s masterpiece is in full bloom and has later just ended during the ‘Epilogue’. There are references, snippets of melody and even characters that overlap. Somehow, this feeling of time out of joint coincides quite eerily with the statement by Sigmund Freud that Don Giovanni was his favorite opera.

Alan Gilbert is major domo (just next door) as music director of the New York Philharmonic. As several of his predecessors have done, he will occasionally lead from the pit of the opera house. How successfully? Well, therein hangs a tale.

Among all of the myths and exaggerations about Mozart, it may be true that he composed the Overture to the Don the night before its premiere. Gilbert established his personal stance from the first notes, adopting a rather self-effacing policy that never varied. Even the normally dramatic music of the statue coming to life, which is the main theme of this intense introduction, was tossed off quietly and in a quotidian manner. As the evening wore on, some very fine vocal performances were left mostly unadorned as the normally brilliant MET Orchestra was asked to leave its bright light under Gilbert’s tentative bushel. 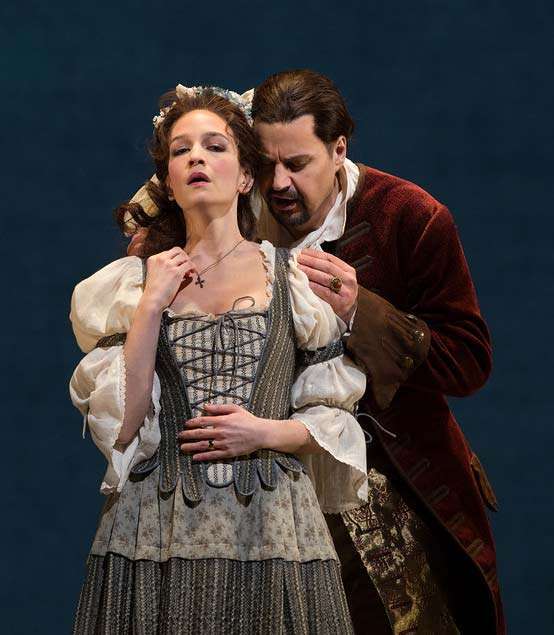 There was indeed some excellent singing. The find of the night was the Don Ottavio of Dmitry Korchak. Making the most of his Met debut, this sweet-voiced tenor stood out throughout, especially with an intense ‘Il mio tesoro intanto’. The Donna Anna of Elza van den Heever was strong and impressive and, perhaps most significantly, Peter Mattei presented his starring role with a great deal of panache and a strident tone, although he had a devil of a time with his diction in the faster passages so vital to pulling off such sophisticated comedy. Less satisfying were the Leporello of Luca Pisaroni and the clearly overmatched Masetto of Adam Plachetka.

That slightly off-center feeling left over from Hoffmann returned briefly when Kate Lindsey, who is also currently appearing as Nicklausse, entered as Zerlina and later when the offstage ensemble intoned ‘Non più andrai’ from The Marriage of Figaro, for the Don’s entertainment, there was the pervading sense that something supernatural – like the statue coming to life – was certainly a possibility. Lindsey and Mattei were suitably engaging in ‘Là ci darem la mano’, a highlight.

Just days before opening night, actor Harald Paulsen approached Kurt Weill and Bertolt Brecht to complain that his character was not given enough of a fleshing out and thus ‘Die Moritat von Mackie Messer’ was born to appear in The Threepenny Opera. Mozart faced a similar situation when Katharina Cavalieri, his Donna Elvira for the Vienna opening – Don Giovanni had been given its premiere in Prague – cajoled him to write an aria that would exhibit her vocal range. The resultant ‘Mi tradi quell’alma ingrata’ is often retained and Emma Bell shone brightly.

A word about the magnificent James Morris. In the early 1990s, one of his great MET roles was Philip II in Verdi’s Don Carlo which he sang dramatically. Samuel Ramey was the Grand Inquisitor and he had reached that point in his career where he took on roles of deep tessitura and gave his all for a brief period of stage time. Now it is Morris assuming this stance and his Commendatore – literally a voice from the past – was thrilling. (Morris will be singing the Grand Inquisitor next month here at the Met.)

The production of Don Giovanni by Michael Grandage is appropriate without being intrusive. We were all warned before the opening curtain that there would be “fire effects” during the penultimate scene and they produced a rather intense heat for those of us who were in the closer seats. However, not even the opening of the Gates of Hell could induce Gilbert to unleash the fury of this powerful orchestra.