The Orchestra of the Metropolitan Opera
Jiří Bělohlávek 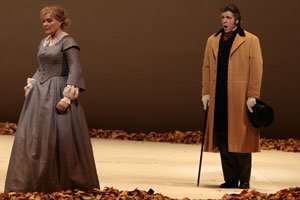 This Metropolitan Opera performance, reviving Robert Carsen’s 1997 production of “Eugene Onegin”, was as nearly perfect as any evening at the opera that I can recall. An outstanding international cast of singers and the Met’s Chorus and Orchestra, conducted by Jiří Bělohlávek brought Tchaikovsky’s entrancing score to life, fully realising the romance, conflict and tragedy embodied in this combination of Russia’s greatest literary and musical figures. Finnish soprano Karita Mattila brought both vocal and dramatic electricity.

Michael Levine’s sets used little in the way of materials to create visual effects of simple but exceptional beauty, aided by Jean Kalman’s lighting. Throughout, an open space bounded by tall, plain walls, with minimal props defining each scene. Levine’s realistic and stylish costumes, standing out clearly against the unadorned backgrounds, provided colour and emphasised differences in class and economic status among various segments of nineteenth-century Russian society.

In a strikingly beautiful way to begin the opera, the orchestral introduction found Onegin, dimly lit through a scrim, reading a letter whilst seated center-stage. As the music became more animated and, as autumn leaves began to fall, he rose with orange lighting to reveal him standing within a small circular clearing in the midst of a sea of leaves that covered the entire stage, and then darkening again as the curtain fell. 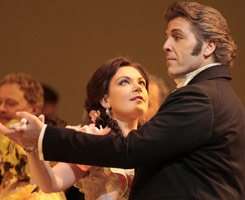 When the curtain rose again for the first scene, with Tatiana and Olga’s duet being sung off-stage, the leaves covered everything, with a few tree-trunks, a table and three chairs defining the Larinas’s garden. The peasants’ chorus was superb, Tchaikovsky’s folk-like melodies and dancing to Serge Bennathan’s lively choreography well-realised. In the famous ‘Letter Scene’ that follows, Tatiana’s bedroom – a rectangular clearing in the midst of the fallen leaves – was furnished with carpets, a bed and nightstand, and a writing desk and chair, and was surrounded by deep blue-lit walls that gradually brightened to yellow-orange as night gave way to dawn. Then, as the act’s final scene began, the servant-girls’ chorus swept the leaves outward to form a large clearing, creating yet another distinct look using just these simple materials.

In Act Two, the Larinas’s ballroom was a large square area bordered by chairs and side-tables. This simple setting came very much to life as the dance-floor was densely filled by colourfully-costumed couples singing and dancing to Tchaikovsky’s incomparable Waltz. The ensuing duel scene was played on a completely empty area, with nocturnal blue lighting brightening as dawn approached and the morning sun rising gradually behind the slain Lenski. 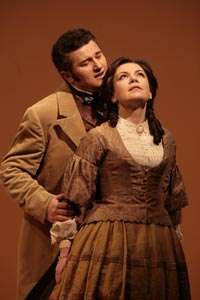 Without an interval, Act Three followed as servants brought chairs to identify Prince Gremin’s palace ballroom and other servants replaced Onegin’s duelling garb with formal wear for the Prince’s ball, all to the music of the Polonaise. The black and white costumes and schottische dances created a very different feeling from the Larinas’s ball in the previous act. In the opera’s concluding scene, with just a single chair, the entire focus was on the drama of the final encounter between Tatiana and Onegin, which left him alone and despairing his loss of Tatiana.

As beautiful as the visual aspects of this production were, the music is, of course, paramount and the entire company performed it brilliantly. Bělohlávek was masterful in his interpretation of the score. His tempos were flawless, and in the various introductory passages he created just the right atmosphere for each scene. Tchaikovsky was arguably the greatest of all composers of orchestral dance music and dancing pervades “Eugene Onegin”. Bělohlávek captured the spirit of each of Tchaikovsky’s dance scenes: the schottische was danced brilliantly by Linda Gelinas and Sam Meredith. The Met Orchestra performed with its usual excellence, enlivening the performance with many outstanding solo passages. Particularly memorable were the solo oboe and horn in the crucial ‘Letter Scene’ in Act One and haunting clarinet solos accompanying Lenski’s Act Two aria.

Karita Mattila made an ideal Tatiana, both as a love-struck teenager and later as a young wife. In the ‘Letter Scene’, her characterization was completely credible, both physically and vocally, the brightness of her vocal line conveying youthful exuberance that matched her movements and gestures, including sliding down from atop the back of her chair to write the final line of her letter. When Onegin rejected Tatiana’s outpouring of love, Mattila effectively carried off the transformation from trepidation to disappointment and then to resignation. And when, several years later, her faithfulness to her much older husband (Prince Gremin) compelled her to reject Onegin’s belated profession of love – despite her admission that she still loved him – Mattila’s portrayal captured superbly Tatiana’s complex and conflicting emotions of love and loyalty. 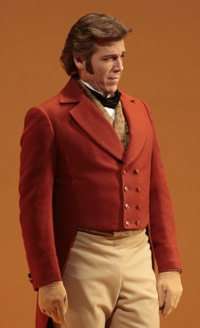 As Onegin, Thomas Hampson also was both vocally and dramatically excellent. Although older than the character he portrayed, he succeeded in conveying the immaturity of the youthful Onegin in the aria where he coldly brushes aside Tatiana’s unabashed expression of love and, later, in angrily accepting Lenski’s challenge – decisions that were both to have tragic consequences. The world-weary Onegin that returned to St Petersburg in the final Act was quite a different character, passionate in his love for Tatiana and in his despair at having destroyed his own life. Hampson remains one of the finest baritones performing today, and he brought beauty of vocal tone and excellent musicianship to this performance. His Act Three arioso and the duet with Mattila that soon followed brought the opera to a powerful conclusion. Although Onegin is really an anti-hero, Hampson made us sympathise with him and feel the agony of his ultimate despair.

Piotr Beczala was superb as Lenski. His arioso declaring his love for Olga was warm and lyrical, and his growing jealousy over Onegin’s attentions to Olga at the ball was quite pungent. Lenski’s heartbreakingly-poignant aria, bidding farewell to life prior to the duel, was a high point of the performance. Ekaterina Semenchuk’s burnished mezzo voice was ideal for the character of Olga, whose interactions with Tatiana, Lenski and then Onegin were crucial in driving the opera’s plot.

Sergei Aleksashkin made a stolid Prince Gremin, delivering his aria in deep, rich tones. Although Gremin is only present for a brief time, his aria is crucial to establishing the changes in Tatiana’s life since we last encountered her and which will account for her response to Onegin’s advances. The remainder of the cast – Wendy White as Madame Larina, Jane Shaulis as Filippyevna, Tony Stevenson as Triquet, Richard Bernstein as Zaretski, and David Crawford as a captain – were all excellent.