The Orchestra of the Metropolitan Opera
Esa-Pekka Salonen 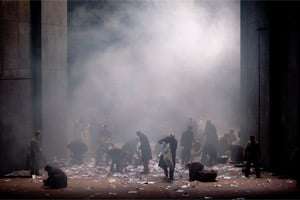 Leos Janáček’s masterpiece, “From the House of the Dead”, is the fourth of the composer’s works to enter the Metropolitan Opera repertory – after “Jenůfa” (1924), “Kát’a Kabanová” (1991) and “The Makropulos Case” (1996). The opera had its premiere in Brno in 1930 (posthumously) and received its first American staging (in English) in 1990 at New York City Opera. This well-traveled production, which had its premiere in Vienna in 2007 at the Weiner Festwochen and made subsequent trips to Amsterdam and Aix-en-Provence, marks not only the work’s Metropolitan Opera premiere, but the company debuts of director Patrice Chéreau and conductor Esa-Pekka Salonen.

Given the opera’s ominous title and setting, audience members unfamiliar with the piece may have been apprehensive as they waited for the opera to start. But once the performance began the entire house sat through the performance in rapt silence. And when the curtain came down at the end, most listeners leapt to their feet for a long and enthusiastic ovation. 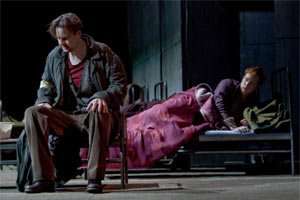 “From the House of the Dead” is not an opera in the conventional sense. There is no identifiable hero and – except for two highly entertaining pantomimes in the second act – there is very little in the way of plot or action. Writing his own libretto, Janáček based the piece on Dostoevsky’s blend of fact and fiction about his experiences in a Siberian prison camp. The work is structured in three brief acts (here performed without intermission) and lasts about 90 minutes.

Patrice Chéreau’s highly effective staging places all of the action within an appropriately dreary-looking set consisting of three large concrete walls which effectively epitomize the isolation of the prisoners. The core of the opera is a series of narratives in which each of four inmates describes the events leading up to his imprisonment. The tellers step forward, tell their stories, and then return to the anonymity of the prison population. 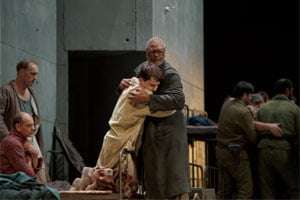 The narratives are delivered as dramatic monologues, with each singer changing the tone and pitch of his voice to suit the story’s characters. Janáček’s restless and explosive music is perfectly attuned to each narrator, so much so that even though the men are all dressed in the same drab prison garb, each one comes off as strikingly individual. And their stories are not only long and involved, but Luka, who tells the first, turns out to be the villain (under his true name) of the last, the tale told by Shishkov, to which he must listen as he lies dying in the prison hospital.

Janáček’s style of vocal writing demands steady, accurate voices, keen dramatic inflections and believable acting, which this performance provided in abundance. The monologues were all superbly performed, dramatically as well as vocally. The most impressive of the soloists was Peter Mattei as the impulsive, ne’er–do-well Shishkov. His gorgeous baritone commanded rapt attention as he delivered his riveting monologue, the longest in the opera, explaining how he slit his wife’s throat in a crime of passion. 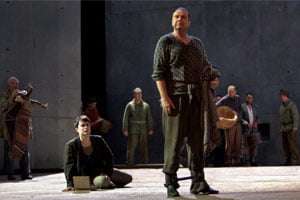 The Slovakian tenor Stefan Margita was by turns cunning and pitiable, but always affecting in the role of Filka (using the alias “Luka”) who relates a story about being put behind bars for vagrancy, and stabbing the commandant while he was there. As Skuratov, tenor Kurt Streit was moving as he passionately recounted how he murdered the rich German his sweetheart had been forced to marry. The veteran bass-baritone Willard White was suitably dignified in the relatively small but pivotal role of Alexander Petrovich Gorianchikov, the stand-in for Dostoevsky’s narrator. And the young German tenor Eric Stoklossa was very effective as the boy Alyeya who is befriended by Gorianchikov.

For this production director Patrice Chéreau added twenty non-singing actors to the large cast of vocal soloists and choristers. Together the actors and singers play members of the prison population as they mill around the prison grounds, eating meals, picking up trash and doing other daily chores. The opera also includes two nimbly choreographed pantomimes which the prisoners stage for their fellow inmates and their guests on a visitors’ day; the actors who performed these comic tales of seduction were absolutely first rate.

Janáček’s demanding, unconventional score mixes brassy outbursts, rending dissonance and fractured rhythms with passages of glorious lyricism. Under Esa-Pekka Salonen the magnificent Met Orchestra delivered a stunning musical performance of this highly original music, effectively illuminating the characters and their stories. From the first note to last this was absolutely riveting.