Gluck
Iphigénie en Tauride – Opera in four acts to a libretto by Nicolas-François Guillard after a work by Guymond de la Touche itself based upon Euripides [sung in French, with surtitles] 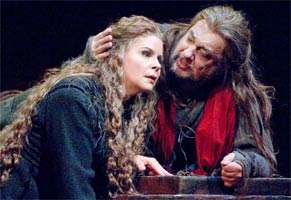 In the Fall of 2007, more than ninety years after the opera’s US premiere there in 1916, the Metropolitan Opera presented a new production of Gluck’s “Iphigénie en Tauride”. As if to make up for its neglect of this important work, the Met has included the production again in this season’s schedule. Written for Paris Opéra in 1779, five years after “Iphigénie en Aulide”, its companion opera also based upon Euripedes’s drama, might appear somewhat subdued than the earlier work. Both were re-orchestrated – the first by Wagner, its successor by Richard Strauss, whose version is used for this staging.

The story of the House of Atreus that provides the background for the opera’s story deals with the aftermath of Clytemnestra’s brutal murder of her husband, King Agamemnon, in revenge for his presumed sacrifice of her daughter Iphigénie to appease the gods. In turn, Clytemnestra’s son, Oreste, kills her for the murder of his father. Oreste is tormented by the Eumenides (the Furies of Hades) and flees their wrath with his friend Pylade. Meanwhile, after being rescued from her sacrifice, Iphigénie and her priestesses take refuge in Tauris, a Scythian province, ruled over by a tyrannical king, Thoas. At this point, the opera begins. Iphigénie reveals that she is haunted by a terrible dream in which she avenges the murder of her mother by killing her brother Oreste. A prophesy that Thoas will be killed by strangers traumatizes him. So he condemns all visitors to his land to be sacrifice. Oreste and Pylade arrive and are promptly arrested. Thoas demands that Iphigénie conduct the sacrifice but she refuses. Although she does not recognize her brother, he knows who she is. Nevertheless, Oreste keeps the truth from her, fearing that she will reject him because of the matricide. Iphigénie can save only one of the two strangers. Oreste insists that Pylade flee and Iphigénie gives him a message to take home in hopes that her people will rescue her. But again she cannot take Oreste’s life on the sacrificial altar, and refuses to obey Thoas’s command that she perform the duties of her office. Pylade returns with Greek forces. A battle ensues – as prophesized, Thoas is killed. Iphigénie finally realizes that Oreste is her long-lost brother and shares the joy of her liberation with him. 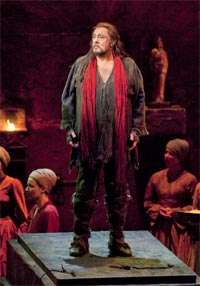 Stephen Wadsworth’s dark, austere production utilizes a single setting, dominated by Diana’s temple, with candles and statuettes (presumably of various minor deities) gracing otherwise bare, rough-hewn stucco walls that surround a huge statute of Diana with her back facing the sacrificial altar, possibly symbolic of her rejection of the Scythians’ blood-thirsty practice of murdering all strangers. A small alcove at stage left, separated from the temple by a thick wall, serves both as the dungeon in which Oreste and Pylade are imprisoned in Act Two and Iphigénie’s chamber in Act Three. The costumes worn by the priestesses make them appear more like peasant women than religious votaries. In an attempt to visualize Iphigénie’s nightmare, images of the gruesome events she relates are re-enacted before us as if we were unable to do so for ourselves. So we witnessed Clytemnestra killing Agamemnon and an image of Oreste suddenly appeared, encased in the wall that separates Iphigénie’s chamber from the Temple. The parents remain after the murder is enacted, Agamemnon lying lifeless within the chamber, Clytemnestra sitting as if in entranced against the wall. Given both the familiarity of the Greek myth and the availability of the text, I am not convinced that showing events related by a character is of benefit, and may even detract from it. Choreographer Daniel Pelzig’s efforts in expressing the priestesses’ suffering through disjointed motions was more persuasive than the acrobatics of the soldiers’ ballet that seemed incongruous. 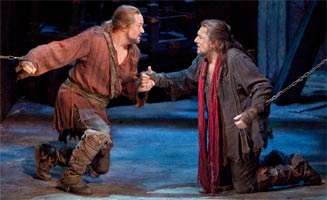 Susan Graham cancelled due to illness and was replaced by Elizabeth Bishop. Although she seemed somewhat restrained at first, Bishop relied primarily upon her strong, dusky voice to convey long-endured suffering that drained all her energy, leaving her powerless to avoid a tragic fate. Consistently secure, Bishop floated her voice seamlessly, brightening its timbre as she reached the top of her range. The piteous lament ‘O malheureuse Iphigénie’ had nobility as well as throbbing intensity. At the beginning of the last Act, Iphigénie had enough stamina left to pray to the image of Diana to give her the strength to carry out her bloody duties. Yet she seemed too cautious or self-conscious to act out the sorrowful emotions her lines conveyed. Even when she finally recognized Oreste to be her brother, she hardly seemed affected by the discovery that was to redeem her.

Although Gluck originally wrote the part of Oreste for a baritone, he changed it to a tenor for the German version. Focusing on the mid-range, it suits Plácido Domingo’s increasingly dark-hewn and husky mid-range; it is remarkable how robust his voice remains. Domingo’s considerable acting skills helped to add life to what otherwise is a rather static staging. As Pylade, Paul Groves, a fine lyric tenor, sang ardently, but he rarely exhibited any physicality. In contrast, Gordon Hawkins, Thoas, furiously stormed across the stage whenever he appeared, his forceful baritone voice sounding somewhat gravelly at the low end of his range. Patrick Summers’s conducting, while tempering tuttis to be respectful to the singers, seemed flaccid and missed opportunity to enhance the opera’s dramatic impact through a more assertive and forceful orchestra.

Some videos from The Met’s “Iphigénie en Tauride”: