The Orchestra of the Metropolitan Opera
Louis Langrée 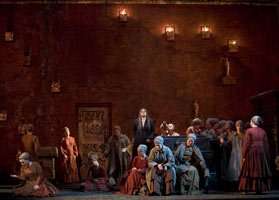 For almost a century after the Met gave Iphigénie en Tauride (Iphigenia in Tauris) its U.S. premiere (in a German translation and a musical adaptation by Richard Strauss that received only five performances in 1916), the company ignored the opera. This evening marked the return of Gluck’s last great success to the Met. Stephen Wadsworth’s stunning new staging is shared with the Seattle Opera, which premiered the production on October 13 in Seattle. This is the first time the Met and the Seattle Opera have joined forces and the result is two-and-a-half riveting hours of music and theater.

‘Iphigénie’ is full of sublime and poignant music, but it is also a difficult opera to bring to life. The plot itself is slender, and most of the action has already taken place before the curtain opens. Based on Euripides’s tragedy of the same name, the opera tells the story of a Greek princess who was carried off to the peninsula of Tauris when her father, Agamemnon, attempted to offer her as a human sacrifice before the Trojan War. Wadsworth has added more action to the drama by staging the memories and dreams of the main characters. In the silent but spectacularly effective prologue that begins this production, Iphigénie is plucked from the sacrificial altar by the goddess Diane, and the two are silently swept up into the air. As the opera opens, Iphigénie, whose family believes she is dead, has begun to serve the enemy Scythians as Diane’s high priestess at a temple in far-off Tauris. When Iphigénie is ordered by Thoas, King of Tauris, to kill two Greek prisoners (one of whom, unbeknownst to her, is her brother Oreste), she agonizes over the task until the goddess Diane appears and reveals the connection between her and her long-lost brother. 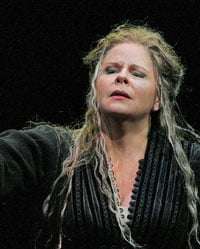 Thomas Lynch’s décor places most of the action in a closed-in temple with dark red walls, a long bas-relief, and a huge statue of the goddess Diane. The temple occupies about two-thirds of the stage. The rest is taken up by a darkly-lit storage room that serves as a prison cell for Oreste and Pylade, and a narrow passageway that opens to the outside. Martin Pakledinaz’s costumes are mostly a combination of dark reds, oranges and golds that blend perfectly with the set’s dark, ominous feel. Neil Peter Jampolis’s simple and direct lighting design is very effective.

Much of the success of Iphigénie depends on the pivotal title character, who is required to relay the opera’s traumatic back-story and sing long stretches at a high emotional pitch. Susan Graham, who has been making the role one of her calling cards, was well up to the task. She gave a deeply affecting performance. She was a commanding Iphigénie, full of vocal beauty and with a strong theatrical presence. Her rendition of the serene aria, ‘O malheureuse Iphigénie’ (O wretched Iphigenia) was heartbreaking. 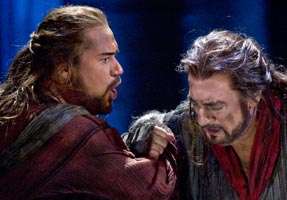 As Iphigénie’s brother Oreste, Plácido Domingo added yet another role to his already impressive repertoire. At the 1779 Paris premiere of ‘Iphigénie’, the role of Oreste was sung by a baritone, and for Valentine Adam Berger, the tenor who sang the role in Vienna, Gluck raised pitches. Taking the composer’s pitch changes into account, Oreste’s role has been lifted for these performances by Domingo. Singing the part with burnished power and stirring emotional immediacy, he paired exceptionally well with lyric tenor Paul Groves, who sang the role of co-captive Pylade with beauty and elegance.

As a forceful Thoas, the Scythian king, William Shimell sounded somewhat strained. Michele Losier, in her Met debut, made a brief but theatrically thrilling last-minute appearance as the goddess Diane. There were smaller but highly effective contributions from David Won as the Scythian Minister, and Lisette Oropesa and Sasha Cooke as the First and Second Priestesses.

Making his company debut, Louis Langrée led the Met Orchestra in an impassioned but disciplined performance. The singers of the Metropolitan Opera Chorus, rehearsed by Donald Palumbo, deserve special mention for their seamless phrasing, singing the more intimate parts with delicate luminosity, and producing more vigorous sounds in the sturdier choral numbers.

This performance of “Iphigénie en Tauride” was a wonderfully balanced spectacle that remained faithful to Gluck’s music and the dramatic situation. The tumultuous applause that greeted the final curtain made the audience’s approval very clear.