[All sung in Italian, with English Met Titles by Cori Ellison] 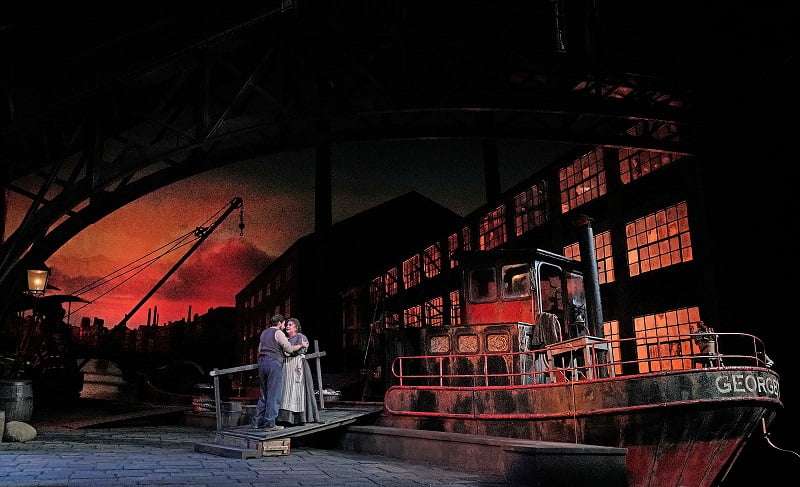 Jack O’Brien’s production of Il trittico, one of the most appealing in the Met’s repertory, is receiving a terrific revival after a nine-year absence. Bertrand de Billy leads a masterful realization of Puccini’s scores, and outstanding singing brings each of the operas to life, aided by magnificent sets, costumes and lighting. The triptych’s contrasting settings, emotions and music create a powerful and entertaining evening. And not the least of the enjoyable features is the portrayal of Gianni Schicchi by Plácido Domingo.

As the curtain rises on Il tabarro to reveal a freeze-frame tableau, we are drawn instantly into the milieu of hard-working bargemen along the Seine in 1927 Paris, realistically depicted. At the center of the horrific drama about to ensue are the barge owner Michele, his wife Giorgetta, and the stevedore Luigi. Amber Wagner and Marcelo Álvarez sing with ardent passion as the lovers and George Gagnidze is chilling in Michele’s soliloquy vowing to kill his wife’s as-yet unidentified lover. An assortment of workers and passers-by add some welcome charm, most notable among them are MaryAnn McCormick, delightful as Frugola, who dreams of retirement with her husband, Talpa, sung resonantly by Maurizio Muraro. Jules Fisher and Peggy Eisenhauer’s lighting, transitioning from sunset to full darkness, makes an especially important contribution to the effectiveness of the dénouement. 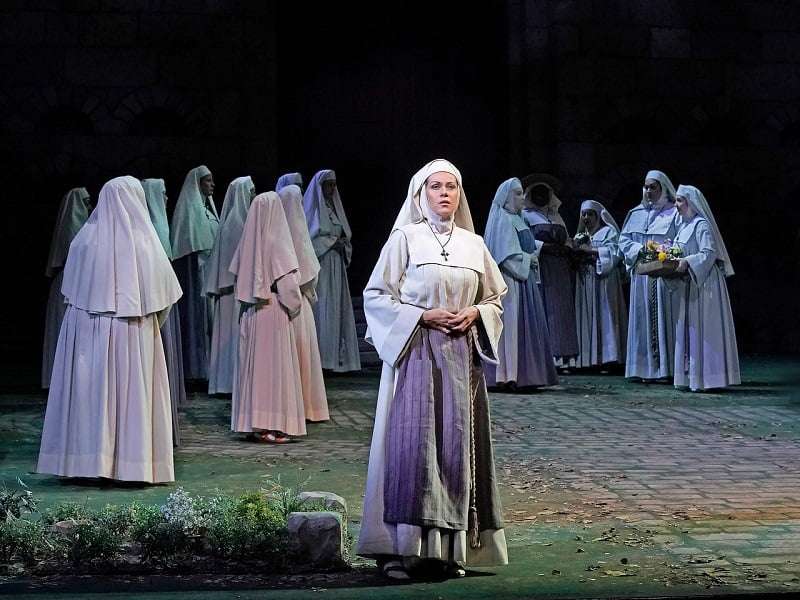 The first half of Suor Angelica is taken up with the everyday goings-on in the convent to which she, marvelously portrayed by Kristine Opolais, was banished by her noble family after she bore an illegitimate child. The atmosphere becomes emotionally charged when her aunt, the Princess – the brilliant Stephanie Blythe – arrives, the first time that Angelica has heard from her family in the seven years. Angelica is devastated when told that the son she has never seen has died, and she accedes to the demand that she sign away to her younger sister her share of inheritance. The encounter is a study in contrasts, Angelica on fire and the Princess icy cold, turning up her nose in a gesture of scorn as she exits with the executed document. What follows is a tour de force for Opolais, heart-rending in ‘Senza mamma, bimbo, tu sei morto’ and in portraying her terror when realizing that poisoning herself would prevent her desired reunion in Heaven with her child. The miracle that spares her is carried off effectively. 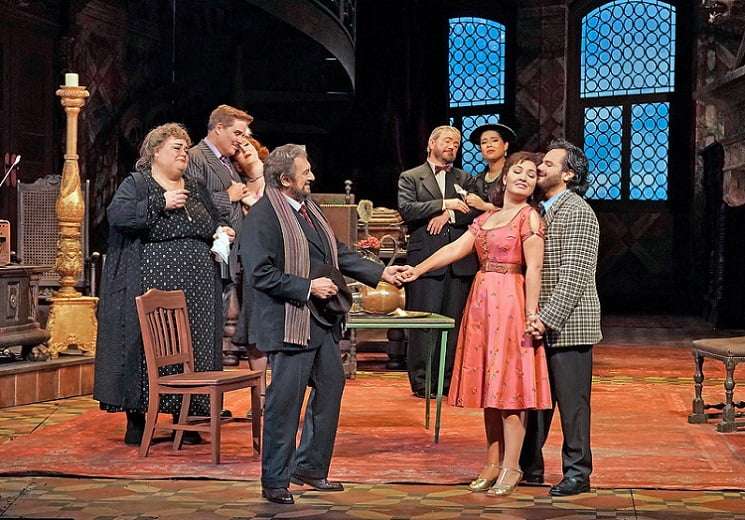 The best of Il trittico comes with Gianni Schicchi, the hilarious yarn carried off with precise comic timing, ensuring that every punch-line and sight-gag lands with maximum impact. The plot revolves around a family’s discovery that Buoso Donati, their just-deceased relative, has willed his fortune to a monastery. This would leave Rinuccio too poor to marry his sweetheart Lauretta, since she could not offer a dowry, so he suggests enlisting her father, Schicchi, to help. He impersonates Buoso and dictates a new will leaving the best items to himself in order to turn them over to the couple.

Atalla Ayan is affecting in Rinuccio’s praise of Schicchi, and Kristina Mkhitaryan sings ‘O mio babbino caro’ with considerable charm. But it is Domingo’s characterization that steals the show, as he adds another baritone role to his repertoire. His stage presence is peerless, and finally Donati’s house – now Schicchi’s – descends to reveal the happy Lauretta and Rinuccio overlooking Florence. Domingo has the last (spoken) words, begging our approval of what he has done.