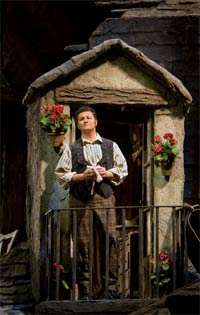 This was the Metropolitan Opera’s thirteenth performance this season of its crowd-pleasing 1981 production of ”La bohème”, the super-realistic Franco Zeffirelli staging that includes an Act One and Act Four set consisting of a cut-away garret, with a view of all the lower-lying rooftops in Paris. The most spectacular set is the gargantuan Act Two tableau which presents the Café Momus, along with what looks like the entire population of the Latin Quarter bustling about. The most beautiful set is for Act Three, where a tollgate on the outskirts of Paris is bathed in the soft gray light of a snowy winter dawn.

The story of four impoverished Bohemian friends trying to survive in 19th-century Paris is the most frequently performed opera in the history of the Met. After its company premiere in 1900 it was presented in 58 consecutive seasons and in all but six. This performance offered a fine cast that, for the most part, was not overshadowed by Zeffirelli’s proscenium-bulging sets. 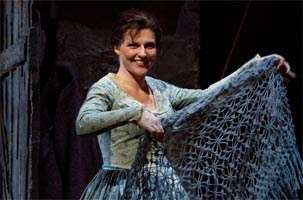 Maija Kovalevska appeared as the seamstress Mimì (the role in which she made her 2006 Met debut). She gave a highly credible performance, ably conveying Mimì’s vulnerability and passionate intensity. She was most moving in Act Three, singing ‘O buon Marcello’, her duet of despair with Marcello, and ‘Donde lieta uscì’, her farewell to Rodolfo, with conviction, purity and splendid resonance. As the poet Rodolfo, Piotr Beczala was youthfully fervent and delivered a fine performance. He sang ‘Che gelida manina’’ with heart-rending passion, and his bright, agile tenor melted perfectly with Kovalevska’s soprano in the love duets ‘O soave fanciulla’ and ‘Sono andati?’. His acting skills served him well in his Act Three exchanges with Marcello, which came off especially strong.

Susanna Phillips was a bright-voiced, saucy Musetta in Act Two, flouncing among the crowd at the Café Momus and giving her all as she sang her waltz ‘Quando me’n vo’ and becoming more effective as the evening progressed. A more volatile side to her character was persuasively revealed in her Act Three quarrel with Marcello, and she was convincingly tearful in her Act Four report of how Mimì begged to be taken to Rodolfo to die. The most impressive baritone was Peter Mattei. As the painter Marcello, his rich, deeply-colored voice and charismatic presence made a very striking impression. He displayed an appealing, easy camaraderie with Beczala’s Rodolfo in Act One, and an exceptionally moving melancholy in their Act Three duet, ‘O Mimì, tu più non torni’.

The other bohemians, Shenyang as the philosopher Colline and Trevor Scheunemann as the musician Schaunard, were straightforward and adequate. Rounding out the cast was Paul Plishka, a veteran of more than 1500 performances with the Met, who contributed some enjoyable comic turns in a double appearance as the landlord Benoit and Musetta’s sugar-daddy Alcindoro.

Marco Armiliato (who made his Met debut in 1998 conducting “La bohème” and has since conducted more than 200 performances here) led a supple, briskly-paced reading of the opera, effectively illuminating Puccini’s highly melodic and rapidly changing score, from its moments of cheerful jocularity to its heart-rending finale.