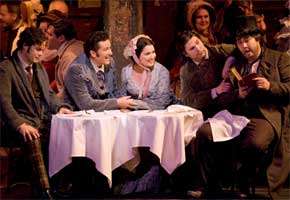 Puccini’s “La bohème” is back at the Metropolitan Opera, hardly a surprise, since it has been performed there over 1,200 times – more than any other opera – and has been staged in all but six Met seasons since its premiere in 1900. This elaborate production, introduced in 1981 and perennially popular, may prove to be the most enduring of Franco Zeffirelli’s Met productions, as the company continues to retire them one by one. (New productions this season replaced his 1996 “Carmen” and 1985 “Tosca”, and next season will see a new “La traviata”, replacing Zeffirelli’s 1998 production, which itself had supplanted his own production of 1989.)In the lead roles were Anna Netrebko and Piotr Beczala. Beczala continues to demonstrate his quality, with thrilling top notes and lyrical tenderness as Rodolfo introduced himself to Mimì (‘Che gelida manina’). Returning the favour (‘Mi chiamano Mimì’), Netrebko demonstrated that she remains in top form, her voice solid and secure, yet with shimmering quality. Their beautifully sung duet (‘O soave fanciulla’) brought Act One to a soaring finish. The lovers’ encounter in Act Three was emotionally charged as Mimì bade Rodolfo farewell (‘Donde lieta uscì’) and the two then joined in a quartet with Musetta and Marcello (‘Addio, dolce svegliare’), and they were quite touching and moving in Act Four as Mimì weakened and died, with Rodolfo crying out to her at the final curtain. 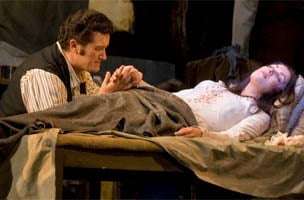 Portraying Rodolfo’s fellow bohemians were Gerald Finley, Massimo Cavalletti – making a fine Met debut in the present run – and Oren Gradus, a New Yorker. This excellent quartet brought delightful camaraderie and good humour to Zeffirelli’s cleverly constructed Parisian garret in Act One, and to the designer’s over-the-top Café Momus (Act Two), but were caring and sympathetic friends when Mimì lay dying in Act Four. Finley was particularly outstanding, singing with clarity and creating a memorable character as the painter Marcello, whose on-off relationship with Musetta is a major sub-plot of the opera.Nicole Cabell (2005 Cardiff Singer of the World) gave a fine performance, reflecting contrasting aspects of Musetta’s character: coquettish in her waltz-aria in Act Two (‘Quando me’n vo’ ’), fiery in the Act Three quartet, and empathetically tearful as she cared for the dying Mimì in Act Four. Paul Plishka, a veteran of over 1,500 Met performances, sang excellently in his amusing portrayals of two elderly characters who are mocked and abused by the brash bohemians – their landlord Benoit, and Musetta’s wealthy escort, Alcindoro.Marco Armiliato has become a mainstay at the Met since his 1998 debut (conducting “La bohème”), having conducted more than 200 performances of some 16 operas that run the gamut of the Italian operatic repertory. He led a delightful traversal of Puccini’s score, evoking fine playing from the Met Orchestra and seeming to shape each phrase as he guided the players and singers with sweeping gestures. 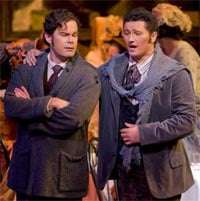 Zeffirelli’s production serves the opera quite effectively, except for the elaborate evocation of Parisian nightlife at the Café Momus in Act Two, which, ironically, garners the most enthusiastic audience reaction. This scene is quite spectacular, with building façades in the background and dozens of elaborately and beautifully costumed vendors, children and pedestrians densely packed and milling about on two levels and ascending and descending on a huge stone staircase. The effect of all of these elements, unfortunately, was to distract the audience from the opera’s principals to such an extent that it became difficult at times to locate them on as they were singing. At least during Musetta’s waltz, however, the host of extras assumed a frozen posture so as not to distract from the Act’s highlight. The end of the Act featured yet another spectacle, as a colourful military contingent entered on the upper level, marched down the stairs and across the stage as the curtain fell.Zeffirelli’s other sets served the action much more effectively. The garret of Acts One and Four, perched high among the rooftops of Paris, was both functional and appropriately atmospheric in showing the impoverished conditions under which the bohemians lived. Best of all – indeed, just about perfect – was the custom-house gate setting of Act Three. Gil Wechsler’s lighting was especially noteworthy in its realistic depiction of a snowy Parisian dawn that lit the officers and passers-by dimly so as to avoid upstaging the principals. The chill of the air and the warm glow emanating from the inn were virtually tangible.