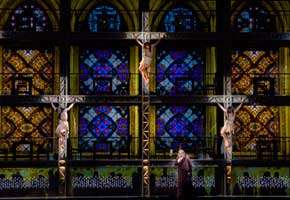 Although intended for concert performance, Berlioz’s “Le Damnation de Faust” is staged occasionally, as the Metropolitan Opera did in 1906. More than a century later, it made a spectacular re-appearance as the Met’s first interactive opera. Previously presented at the Saito Kinen Festival in Japan in 1999 and the Bastille Opera in Paris in 2001, Robert Lepage’s production has since evolved beyond mere video projection. As designed by Holger Förterer and Boris Firquet, it now incorporates electronic elements which pick up on motion and sound to trigger and influence projected images.

The third dimension has been all but eliminated in the set, steel scaffolding creating 24 square panels, which takes up the whole height and breadth of the stage. Catwalks at the different levels provide a staging area for singers, dancers, choristers and extras. Using projections, this structure can be made to look like a library with students at their desks in individual cubicles, a church with stained glass windows, Auerbach’s tavern, or Marguerite’s house of many rooms; during the dancers’ ‘Menuet des follets’, the virtual curtains flutter in response to their movements. 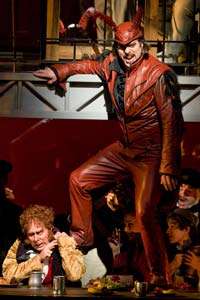 When scrims are drawn, the set can also be used as one giant screen. In an ingenious combination of real action and electronic wizardry, a boat carrying Méphistophélès and Faust glides over projected water; a camera meanwhile captures the image of the vessel and projects its water-reflected image beneath it. When it is tipped over, the action continues with a film of Faust underwater; in a later scene extras on the top catwalk audibly ‘plunge in’ and perform a sort of underwater ballet.

In addition to the actors and dancers enacting scenes from the narrative, a troupe of acrobats creates some of the most striking images – a succession of Christs being suspended on giant crosses, or creatures of the underworld swinging across and climbing on the structure. For the finale of Part II soldiers (attached to wires) walk up vertically from the floor of the stage over a projected field of grass, only to collapse at the top and limply drop down into the laps of their grieving mothers below. While it is a technological marvel to see the grass ‘parted’ by their steps, the Paris production had more of a dramatic impact by having them march over projections of the ruins of post-war Europe, as seen from a plane flying overhead.

Some of the most spectacular effects are saved for the end – a giant close-up of Marguerite’s face while everything is slowly being engulfed by flames, trees withering and dying at Méphistophélès’s (and eventually Faust’s) touch, and gradually multiplying images of the two of them astride galloping horses during the Ride to the Abyss. 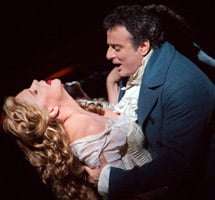 James Levine was at the helm for this ground-breaking premiere, conducting a somewhat understated performance. With a concentration on nuance and the Met Orchestra’s tonal beauty, his low-energy concept was strangely at odds with some of the more dynamic visual scenes, often involving the well-trained Met Chorus.

Nevertheless, John Relyea managed to generate his own drama with a skilfully acted, beautifully sung Méphistophélès, except for some strain in the top register. Marcello Giordani as Faust was not quite up to the task, dramatically and vocally. More Italianate in style than French, he was clearly uncomfortable with the wide vocal range. His unsteadiness of pitch was most noticeable in high passages, while the bottom notes turned breathy. Susan Graham’s Marguerite, however, left nothing to be desired – sensitively acted, stylishly interpreted, and delivered with a warm and rich, yet clear sound.

With this production the Met has taken a bold step towards the future of operatic staging. Unhampered by physical limitations, stage directors will be able to give their imaginations free reign. Hopefully technology will keep progressing to the point where the depth of the stage can be utilized as well, adding yet more creative options. Robert Lepage and his team, who were wildly cheered by the audience, have already been engaged to direct the house’s next ‘Ring’ cycle (2010/11), a work which seems ideally suited to this kind of magic.