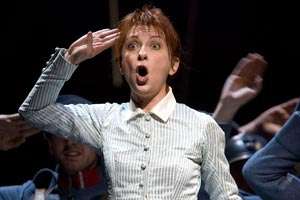 Laurent Pelly’s production of Donizetti’s “La Fille du régiment” (The Daughter of the Regiment), already seen in London and Vienna during 2007, achieves the dual goal of making comic-opera palpably moving and laugh-aloud funny at the same time. With an updated setting that moves the action from the Napoleonic Wars in the Tyrol to World War One, and re-written, character-sharpening dialogue by Agathe Mélinand that manages to be charming without being pandering, the production is a treat from beginning to end.

In a performance very much in the French style, the greatest strengths are the two leading roles, the brilliant stage direction and the warm and idiomatic conducting. As Marie, a vivandière in the army of Napoleon, Natalie Dessay is perfectly cast and acts as well as she sings. With her flawless comic timing and intrepid coloratura, she was in turn wildly funny and genuinely poignant, executing a wide array of tomboy antics while tossing off flawless roulades. Her doleful farewell to the camp, ‘Il faut partir’ (I have to leave), was beautifully poignant. 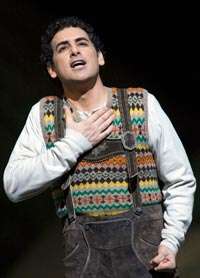 Opposite Dessay, Juan Diego Flórez made a handsome and engagingly youthful Tonio. His bright, lyrical tenor with is formidably unstrained top register coped superbly with the notorious Act One arietta ‘Ah! mes amis’ and its bevy of high Cs – and he then repeated the whole thing in response to a show-stopping standing ovation. Equally enjoyable, if not as flashy, was his charming, effortlessly delivered second act Romance, ‘Pour me rapprocher de Marie’.

The other cast members were universally excellent. Felicity Palmer was a commanding singer and actor in the character role of the Marquise of Berkenfield. Alessandro Corbelli was splendid as the compliant Sulpice. Donald Maxwell made an appropriately pompous and booming Hortensius. Veteran Broadway actor Marian Seldes was formidable in her brief speaking part as the Duchess of Krakenthorp.

Pelly’s production is full of delightfully comic touches, as when Marie makes her first appearance, sitting with legs akimbo as she peels potatoes. Later in the first act, a clothesline of ‘long johns’, stretched across the width of the stage, bounces in time to the music as Marie sings the ‘Chacun le sait, chacun le dit’, the ‘Song of the Regiment’, with a chorus of soldiers. Near the end of the opera, when the soldiers of the 21st-Regiment storm-in singing ‘Au secours de notre fille’ (We have come to help our daughter), Tonio secures a grand coup de théâtre, making his final entrance standing on top of a World War One army tank.

Marco Armiliato was an elegant and energetic conductor, moving the music with consistent sparkle and wonderful control. The ensembles were all brilliantly done, especially ‘Tous les trios rèunis’, the reunion trio of Act Two, and ‘Salut à la France’ at the end of the opera, in which everyone seemed to be having a wonderful time.