The Orchestra of the Metropolitan Opera
Daniele Callegari 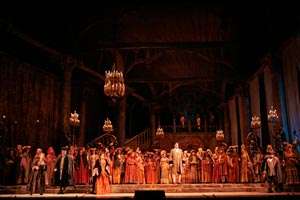 Conceived on the grandest of scales, Amilcare Ponchielli’s “La Gioconda” contains all the paraphernalia dictated by the nineteenth-century grand opera formula: four acts, a melodramatic storyline, a large cast, massive crowd scenes, a huge orchestra, opulent settings, and a ballet. The dramatically overblown plot, which defies a logical, brief summary, is one of the most tortuous in the history of opera. As anyone familiar with Ponchielli’s most famous work knows, it has nothing to do with the Leonardo da Vinci painting “La Gioconda” (better known in the English-speaking world as “Mona Lisa”). Instead it revolves around the fortunes of a Venetian street singer, the titular character, and comprises a staggering array of cloak-and-dagger elements including revenge, a blind mother in danger, noblemen in disguise, arson, poisoning, kidnapping, stabbing, adultery and suicide.

Two years ago the Metropolitan Opera’s then forty-year-old production of “La Gioconda” returned to Lincoln Center after sixteen years on the shelf. This season the Met has staged it again, including Beni Montresor’s 1966 sets, costumes touched up and added to by Holly Hynes, and Christopher Wheeldon’s choreography. 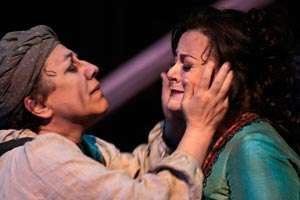 There are some good bits in Ponchielli’s score, and they provide many opportunities for the principal singers to shine. On this occasion some of those good bits were well performed; others were less alluringly handled.

Ewa Podleś provided the best singing. Prior to taking on the role of La Cieca her entire Met career had consisted of four 1984 appearances – two at the Metropolitan Opera House and two in New York city parks – singing the title role in Handel’s “Rinaldo.” One has to wonder why it took so long for the Met to invite her back. Podleś has a powerful, androgynous sound that is instantly recognizable, and in the relatively small role of Gioconda’s blind mother she gave a blazingly intense, larger-than-life performance of the sort that is rare today. Her delivery of her Act One aria ‘Voce di donna o d’angelo’ was the vocal highlight of the four-hour evening. 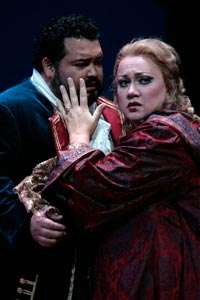 The singing by the rest of the cast was decidedly less impressive. As Gioconda, Deborah Voigt, who first took on the role at the Liceu in Barcelona in 2005, was a surprisingly weak presence until her big Act Four aria, ‘Suicidio’, in which she seemed somewhat more inspired. As Laura, Olga Borodina was firm and intense at times, but appeared overextended by the demands of ‘L’amo come il fulgor del creato’, her Act Two duet with Voigt.

The weakest link was Aquiles Machado. As the romantic hero Enzo he was hopelessly mismatched, visually as well as vocally, with his two leading ladies. ‘Cielo e mar’ was the biggest disappointment, with his voice sounding thin and exceedingly unappealing.

The other men in the cast were better. Carlo Guelfi was an acceptable and conventionally nasty Barnaba. Making his Met debut as Alvise, Orlin Anastassov did not make a strong impression in his opening scene, but warmed up, both vocally and dramatically, in Act Three as the vindictive husband singing ‘Si! Morir ella de!’

Under the direction of Daniele Callegari, also making his Met debut, the Orchestra was in its usual good form and provided some excellent solo playing, most notably in the ballet, ‘Dance of the Hours’. The chorus sounded less enthusiastic, except for a brief patch at the beginning of Act Two, when the singers backed up Guelfi in a hearty rendition of the barcarolle, ‘Pescator, affonda l’esca’.