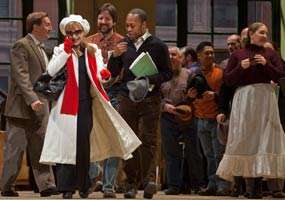 Even for a bel canto opera categorized as semiseria, the plot of Bellini’s “La sonnambula” strains the limits of plausibility. Librettist Felice Romani, Bellini’s frequent collaborator (he provided the libretto for all but two of the composer’s operas), places the action in a small Swiss village in the early 1800s. The action centers around Amina, an orphan and the fiancée of Elvino, a wealthy young landowner. On the night of her engagement, Amina, the eponymous somnambulist, sleepwalks into the room of the mysterious Count Rodolfo who is staying at the local inn. Realizing she is the local ‘ghost’ the villagers have warned him about, and not wanting to embarrass her, the Count leaves Amina innocently asleep on his bed. When Elvino finds her there, he is convinced that she has been unfaithful and turns his romantic attentions to Lisa, the proprietress of the inn. Amina is proved innocent when, mourning the loss of Elvino and in sight of all the villagers, she sleepwalks a treacherous course over the village rooftops. All is forgiven, and the opera ends happily.

Mary Zimmerman, the director whose production of Donizetti’s “Lucia di Lammermoor” opened the 2007-2008 Metropolitan Opera season, has given Bellini’s melodrama an especially daring revisionist treatment and moves the setting from the Swiss Alps to a rehearsal room in New York City. In Zimmerman’s zany and immensely amusing conception, created with her long-time collaborators Daniel Ostling (sets) and Mara Blumenfeld (costumes), a modern-day opera-company is rehearsing a traditional production of “La sonnambula”, and the soprano and tenor singing the leading roles are themselves entangled in a similar romantic jumble and by coincidence just happen to be named Amina and Elvino. The plot blurs further when the action moves back and forth between the hectic rehearsal studio and the bucolic setting of the ‘Sonnambula’ production the company is preparing. 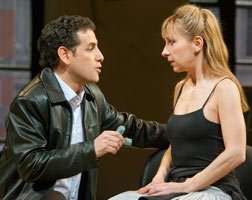 If all this sounds confusing, it is. It’s also a lot of fun. But judging from comments overheard during intermission, and the loud boos that greeted the production team when they came out for their curtain call, the added plot complexity was just too much for most of the opening night audience, even though they laughed loudly and often at the production’s many deliberately comical elements, including Count Rodolfo displaying an illustrated encyclopaedia article as he explains the phenomenon of sleepwalking to the incredulous villagers, and Amina’s sleepwalking up to a blackboard in the rehearsal hall and scrawling the word “ARIA” on the blackboard just before launching into her Act Three ‘Ah, non credea mirarti’.

To those who demand a traditional mise en scene for Bellini’s bel canto idyll, this production will seem unforgivably irreverent. To others, who are willing to accept the ambiguity inherent in an innovative concept that stretches way beyond the conventional approach, it will seem utterly delightful. 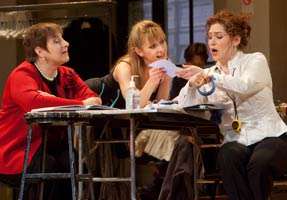 In the role of Amina, soprano Natalie Dessay (who reportedly wanted the Met to take a non-conventional approach to this opera) did some wonderful singing. With her unique combination of beautiful voice, superb coloratura technique and splendid acting skills, she made a memorable Amina. Highlights in her affecting performance were her Act One ‘Come per me sereno’ (How peacefully for me this day is born again) and that ‘Ah, non credea mirarti’ (I hadn’t thought I’d see you) she sang in her closing scene.

As Elvino, tenor Juan Diego Flórez reunited with Dessay, with whom he partnered so successfully in last season’s “La Fille du Régiment”. On this evening he gave another winning performance, producing a light but wonderfully ringing tone combined with an impressive command of technique.

The members of the Met Chorus have a lot to do in this production and made the most of their frequently-comic contributions. Evelino Pidò elicited a beautifully played performance from the Met Orchestra, with the woodwinds and the horns providing some especially sparkling moments.