The Orchestra of the Metropolitan Opera
Steven White 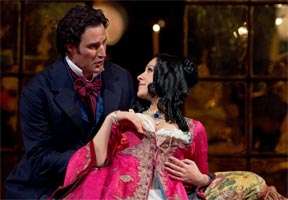 The Metropolitan Opera had originally contracted Leonard Slatkin to preside over a revival of John Corigliano’s “The Ghosts of Versailles”, but then opted to revive a surer box-office success, “La traviata” (in Franco Zeffirelli’s well-worn production). Slatkin agreed to conduct Verdi’s score, though (as he posted in his blog) he’d never done so before – an honest admission that provoked a ridiculous brouhaha in the press and opera blogosphere, and that likely fueled a general panning of the opening night performance (which had reflected some rehearsal difficulties with non-appearing singers, not least Angela Gheorghiu). Slatkin quickly withdrew from the production. He was succeeded first by Marco Armiliato. I attended the third performance, which was conducted by Steven White, in his Metropolitan Opera debut (he’s been on the Met’s conducting roster since last February). Following White’s leading of the performance on the 10th, Yves Abel is scheduled to lead the remainder of the run.

White’s beat is clear and concise, and throughout the evening he demonstrated his ability to both lead and follow the singers – although (ironically given first-night criticisms) coordination between stage and pit remained occasionally shaky. The performance started out rather stiffly, musically speaking, which may be due to some understandable caution on the conductor’s part. He set a flowing tempo for the Prelude to Act One, for example, and held to it a little too tenaciously. The result was foursquare and lacking in fragility and tenderness. String ensemble was slightly ragged, too. 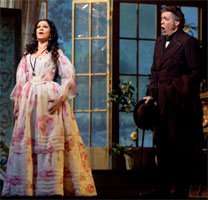 The vivacious music of the opening party scene was rendered crisply and cleanly, however. Indeed, White generally seemed more comfortable in fast-moving sections; slower passages were often lacking in tension; for example, the orchestral introduction to Germont père’s aria, ‘Di provenza il mar, il suol’, moved note-by-note rather than in phrases. But White’s interpretation found surer footing as the evening progressed. The Prelude to Act Three was supply and expressively played, although the strings were still somewhat scruffy. 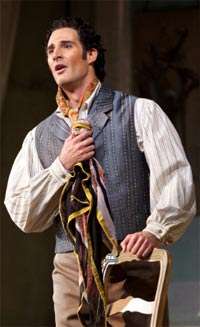 James Valenti also made his Met debut in this production, and his innocently ardent portrayal of Alfredo Germont was largely persuasive. The young American tenor has a sweet voice that projects well, even in the Met’s large auditorium. He phrased generously in the arias and ensembles, but I was bothered by a persistent lack of detail in his interpretation. Rhythms tended to be lax and ornaments were smeared, undermining their expressive potential. These shortcomings seemed especially glaring because the performances of the other two principals were so rich in incident and color.

Angela Gheorghiu has been singing ‘Traviata’ for at least sixteen years, and she makes every note essential to the development of Violetta’s character. She does this partly through dynamic shading – vocal chiaroscuro would 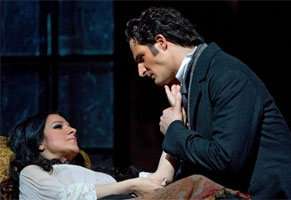 be an apt description – as well as through judicious rubato. But while Gheorghiu can be very free with tempo at times (she made ‘Ah fors’è lui’ quite a technical challenge for White), she always keeps the rhythms taut. Valenti’s singing sounded downright lazy by comparison.

Thomas Hampson was in terrific voice – the most robust I’ve heard him in a while. And he made Alfredo’s father into a very human, credible figure whose primness was reflected in stiff phrasing and stentorian tone. Yet there was warmth behind his hectoring manner; he appeared more conflicted than merely prudish. Best of all, he and Gheorghiu had real chemistry. Their clash in Act Two was riveting, and by far the dramatic highlight of the night.

The smaller roles were all strongly cast. John Hancock was a haughty, menacing Baron Douphol. Theodora Hanslowe (Flora) and Louis Otey (The Marquis d’Obigny) charmed with their bickering (despite the stage director’s heavy hand with the slapstick comedy). Kathyrn Day brought a rare sense of nobility to the role of Annina. And the Metropolitan Opera Chorus was in top form, too.

The audience loudly announced its approval of Zeffirelli’s production at the beginning of every act. In my eyes the visual elements manage to be at once gaudy and dowdy – and the bi-level set for Act Three smacks of Broadway overkill. But, hey, it sells tickets. And I have a hunch that Slatkin’s much-publicized departure didn’t hurt, either. After all, there’s no such thing as bad publicity.

Still, I’m disappointed that Slatkin opted not to soldier on. He may have had a bumpy start, but this warhorse of an opera could benefit from a fresh perspective (Mahler’s dictum that “tradition is slovenliness” comes to mind). I recall the conductor’s winning way with Puccini’s “La fanciulla del West” at the Met some years back, and I have a hunch that (once the bumps were ironed out) his ‘Traviata’ might have also been something to remember with fondness.