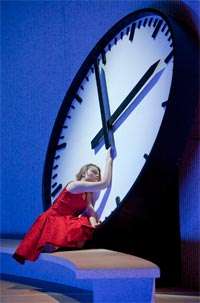 Willy Decker’s streamlined, modern-dress production of “La traviata” is striking even before the curtain goes up. There is no curtain in this staging. When the audience enters the opera house, they see Dr Grenvil – a minor character to whom Decker has given a prominent role – seated next to an enormous clock. Both Grenvil and the clock remain visible for nearly every minute of the performance. The stage itself is surrounded by a curved, white wall with a graceful black oval opening at the top and a long white bench at the bottom. The starkly beautiful set is nearly empty, except for the clock with its moving hands, a persistent reminder that the life of the terminally ill heroine is ticking away, and Dr Grenvil as a grim specter of Violetta’s imminent death. 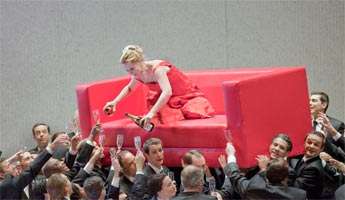 Decker’s staging is new to the Metropolitan, but it is already five years old having premiered at the Salzburg Festival in 2005 with Anna Netrebko as Violetta, Rolando Villazón as Alfredo and Thomas Hampson as Germont (with Carlo Rizzi conducting the Vienna Philharmonic). Since then it has traveled to Amsterdam where Marina Poplavskaya took over the leading role to great acclaim at the Netherlands Opera in April 2009. The production was highly praised for its bare bones, highly direct approach. And Poplavskaya as Violetta walked away with the Performance of the Year Award from the Society of Friends of the Netherlands Opera.

This performance (the fourth in the Met’s scheduled run of nine) was totally enthralling and lived up to the all the hype of the pre-production publicity. The starkly lean production, stunningly different from the Met’s two most recent stagings – the overstuffed Zefferelli creations introduced in 1989 and 1998 – brings the audience closer to the characters and the heart of Verdi’s drama. Except for the ever-present clock and bench, and the occasional couch or group of couches, Wolfgang Gussman’s stark set remains unadorned through all three acts.

Gussman’s contemporary costume designs are marked by an equally refined simplicity. For the party scenes Violetta wears a short, flaring, fire-engine-red dress, and in her death scene, she is garbed in nothing more than a simple short slip. The chorus members, whether male or female, are dressed in identical black suits throughout. The effect is somewhat disorienting but it is also visually and dramatically effective. 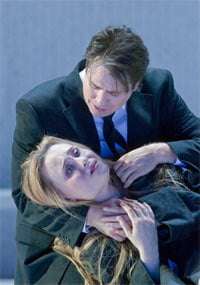 The role of Violetta Valéry is problematic, demanding extraordinary vocal and dramatic skills. It is often said to require three different voices: a brilliantly florid coloratura soprano for the heroine’s Act One ‘Sempre libera’; a fuller, richer-sounding voice to animate her Act Two meeting with Germont; and a darkened tonal color for the final death scene of Act Three. As Violetta, Marina Poplavskaya succeeded in an extraordinary task. She not only mastered the complex vocal and dramatic demands of Verdi’s score, but she managed to do so while executing the nearly acrobatic feats required in Decker’s staging. For example, she sang ‘Sempre libera’ while holding an open champagne bottle in one hand and a champagne glass in the other, all the while standing barefoot on one arm of a sofa. Acrobatics aside, she delivered a profoundly poignant portrayal, beautifully sung from beginning to end as the doomed heroine is transformed from a carefree party-girl defiantly ignoring the symptoms of her fatal illness into an emaciated and totally isolated woman in the final throes of death.

Matthew Polenzani made a youthfully ardent and sweet voiced Alfredo. His graceful singing was most effective in the joyful, tender-hearted sequences of Acts One and Three, and he sang his Act Two love-song ‘De’ miei bollenti spiriti’ with an appropriately easy joy. But his lyrical voice was less suited to, and he appeared less comfortable in, the more tortured moments of the opera, in particular his Act Two outburst and denunciation of Violetta.

Andrzej Dobber gave a sensitive, warm-voiced performance as the elder Germont. His ‘Di Provenza il mar’, in which he urges his son to come home to the sea and soil of Provence, was sung with great feeling.

This is a production in which choreography played a very strong role. The chorus was precisely and busily placed throughout the performance, all the while singing superbly. The Act Two ballet was an especially eerie sequence featuring a male dancer wearing an exact replica of Violetta’s red dress and a crowd of tuxedo-clad party-guests in bull-masks charging at her.

Another strong point was the conducting. The Met Orchestra sounded very persuasive under Gianandrea Noseda. His work was energetic, moving and perfectly proportionate, always supporting the efforts of the singers. The strings offered particularly refined playing, most notably in the Preludes to Acts One and Three. Altogether this was a highly original, absorbing and satisfying performance of “La traviata”.

Some video clips from The Met’s “La traviata”: