Skip to content
LnRiLWNvbnRhaW5lcltkYXRhLXRvb2xzZXQtYmxvY2tzLWNvbnRhaW5lcj0iNmIzNDMzNmNmZTc3NWZiNGJlMTVjMmIwMzU3NWM1MjYiXSB7IHBhZGRpbmc6IDI1cHg7Ym94LXNoYWRvdzogNXB4IDVweCAxMHB4IDAgcmdiYSggMCwgMCwgMCwgMC41ICk7Ym9yZGVyOiAycHggZG90dGVkIHJnYmEoIDEwOSwgMTA4LCAxMDgsIDEgKTsgfSAudGItZmllbGRbZGF0YS10b29sc2V0LWJsb2Nrcy1maWVsZD0iODM3Y2ExZjc0MGRjZDdkOTdlMzQzOWMyYjIwMWZmZTMiXSB7IGJhY2tncm91bmQtY29sb3I6IHJnYmEoIDIzOCwgMjM4LCAyMzgsIDEgKTtwYWRkaW5nLXRvcDogMTBweDtwYWRkaW5nLWJvdHRvbTogMTBweDtwYWRkaW5nLWxlZnQ6IDEwcHg7IH0g
LnRiLWNvbnRhaW5lcltkYXRhLXRvb2xzZXQtYmxvY2tzLWNvbnRhaW5lcj0iNmIzNDMzNmNmZTc3NWZiNGJlMTVjMmIwMzU3NWM1MjYiXSB7IHBhZGRpbmc6IDI1cHg7Ym94LXNoYWRvdzogNXB4IDVweCAxMHB4IDAgcmdiYSggMCwgMCwgMCwgMC41ICk7Ym9yZGVyOiAycHggZG90dGVkIHJnYmEoIDEwOSwgMTA4LCAxMDgsIDEgKTsgfSAudGItZmllbGRbZGF0YS10b29sc2V0LWJsb2Nrcy1maWVsZD0iODM3Y2ExZjc0MGRjZDdkOTdlMzQzOWMyYjIwMWZmZTMiXSB7IGJhY2tncm91bmQtY29sb3I6IHJnYmEoIDIzOCwgMjM4LCAyMzgsIDEgKTtwYWRkaW5nLXRvcDogMTBweDtwYWRkaW5nLWJvdHRvbTogMTBweDtwYWRkaW5nLWxlZnQ6IDEwcHg7IH0g
Rossini
Le Comte Ory – Opera in two acts to a libretto by Eugène Scribe & Charles-Gaspard Delestre-Poirson based on their vaudeville play [sung in French with Met Titles in English by J. D. McClatchy]
LnRiLWNvbnRhaW5lcltkYXRhLXRvb2xzZXQtYmxvY2tzLWNvbnRhaW5lcj0iNmIzNDMzNmNmZTc3NWZiNGJlMTVjMmIwMzU3NWM1MjYiXSB7IHBhZGRpbmc6IDI1cHg7Ym94LXNoYWRvdzogNXB4IDVweCAxMHB4IDAgcmdiYSggMCwgMCwgMCwgMC41ICk7Ym9yZGVyOiAycHggZG90dGVkIHJnYmEoIDEwOSwgMTA4LCAxMDgsIDEgKTsgfSAudGItZmllbGRbZGF0YS10b29sc2V0LWJsb2Nrcy1maWVsZD0iODM3Y2ExZjc0MGRjZDdkOTdlMzQzOWMyYjIwMWZmZTMiXSB7IGJhY2tncm91bmQtY29sb3I6IHJnYmEoIDIzOCwgMjM4LCAyMzgsIDEgKTtwYWRkaW5nLXRvcDogMTBweDtwYWRkaW5nLWJvdHRvbTogMTBweDtwYWRkaW5nLWxlZnQ6IDEwcHg7IH0g

The Orchestra of the Metropolitan Opera
Maurizio Benini 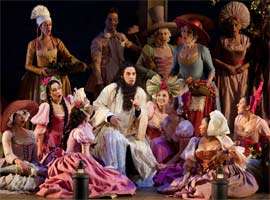 “Le Comte Ory”, Rossini’s farewell to operatic comedy (and his penultimate opera), is a charming and highly original creation. Composed in 1828 for Paris Opera, it is the only one of Rossini’s comedies written in French. This delightful piece combines music from “Il Viaggio a Reims”, a one-act entertainment that Rossini wrote in 1825 to celebrate the coronation of Charles X of France, with a plot drawn from a vaudeville play by Eugène Scribe and Charles-Gaspard Delestre-Poirson about a real-life villain, the libertine Count Ory, who with his band of knights sneak into a French convent in the time of the Crusades.

For the libretto of “Le Comte Ory”, Scribe and Delestre-Poirson expanded their original vaudeville play from one act to two, creating an opening act in which the mischievous Count Ory (who stays home while the other nobles have gone off to fight in the Crusades) poses as a hermit and insinuates himself among the village girls as he tries to find a way to bed the principal object of his affection, the Countess Adèle. For the second act, the librettists kept the original play, in which the rascally Ory and his men masquerade as nuns to gain entrance to the Castle of Formoutiers where Countess Adèle resides. 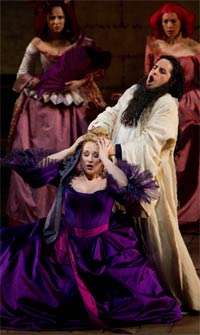 “Le Comte Ory” is rarely heard. In New York, the Opera Center of the Juilliard School mounted a production in 2007, and the Manhattan School of Opera Theater put one on in 1999. The last major performances were those staged by New York City Opera in 1980 and Opera Français de New York in 1993 (a concert performance led by Yves Abel). This Met production is a company premiere. 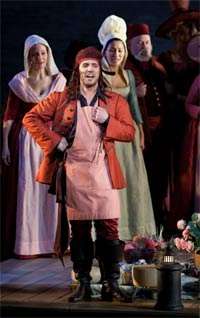 For this staging, Bartlett Sher and his team present the farcical story of the licentious 12th-century Count as an opera within an opera, following the original libretto but framing the Middle Ages setting on an antique wooden stage inside a 19th-century theater. Michael Yeargen’s designs have a very intimate feel, much of which comes from being able to see the old-fashioned, manually-operated theatrical mechanisms at work – wind machines being turned, thunder sheets shaken, and stage pulleys drawn. Brian MacDevitt’s inventive lighting helps to maintain the intimate atmosphere, especially in the second act, where most of the action occurs at night and the stage is illuminated with candlelit footlights.

The three lead singers were all magnificent. As the trickster Ory, Juan Diego Flórez spends most of his time in disguise — nearly all of Act One as a hermit, and most of Act Two as a nun – as he makes a series of unsuccessful attempts to win the Countess’s hand. Flórez played the comic role to the hilt and was very effective. He was in top vocal form, easily traversing the role’s broad range and sounding seductively fluid. His quick vibrato and the ringing, slightly nasal quality of his voice worked to great advantage as they highlighted the antiheroic nature of Ory’s character. Diana Damrau with her perfectly focused and agile coloratura voice was vocally and dramatically stellar as the lonely Countess Adèle, who has been left at the Castle of Formoutiers while her brother is away fighting in the Crusades. Equally impressive was Joyce DiDonato in the trouser-role of Isolier, Ory’s crafty page, who is also trying to win the heart of Adèle, and whose boastful swaggering appears to succeed where his master’s trickery fails. DiDonato sang with rich sound and tremendous assurance all the way into her uppermost range.

The rest of the cast was also strong. Stéphane Degout was vocally and visually handsome as Ory’s friend Raimbaud, and Michele Pertusi brought a deep, smooth sound to the role of Ory’s tutor. Susanne Resmark, making her Met debut as Adèle’s companion Ragonde, produced a rich, warm soprano that was completely in tune with her character. Rossini’s effervescent score has many vocal delights but the highlight of this performance was the elaborate Act Two trio, ‘A la faveur de cette nuit obscure’ (Favored by this dark night), in which the three lead characters enjoy a playful tryst in a huge bed. The scene is a dazzling combination of slapstick staging and musical rapture as the characters mistake one another in a tangle of limbs.

Maurizio Benini conducted a stylish and lively account of Rossini’s diverse and sophisticated score to complete an engaging night at the opera.