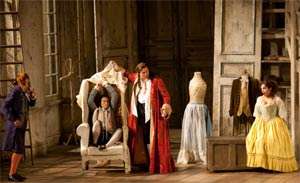 Dan Ettinger makes his Metropolitan Opera debut with a revival of Jonathan Miller’s sun-drenched, 1998 production of Mozart’s “Le nozze di Figaro”. And right from the Overture, the Israeli conductor proved that he has some strong ideas about Mozart’s score. In addition to the usual bubble and fizz, he found hints of darker elements: accented chords were given extra weight, throbbing bass lines suddenly protruded from the effervescence, and harmonic excursions to the minor were thrown into relief.

Ettinger made surprisingly few bows to period practice (although John Relyea subtly ornamented some of the da capo sections of Figaro’s arias). The conductor generally favored broad tempos, employed a rich, creamily legato string sound, and lavished a great deal of attention on details of articulation and orchestral color. He brought the woodwinds to the fore in ‘Voi che sapete, for example, to form a kaleidoscopically shifting backdrop for Cherubino’s chaotic adolescent longings.

The result was immensely rewarding, revealing a great many new marvels in this familiar music. It must also be said, however, that while this was the third performance in the run, there were small but recurring glitches in the coordination between stage and pit. 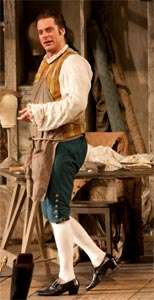 The cast was mostly excellent. Relyea made an affable, confident Figaro. His voice is resonant and warm, with a true basso quality. He’s an intelligent singer, too. In ‘Non più andrai’, for instance, he emphasized the contrast between the dotted martial rhythms (which he sang pointedly) and the fanfare-like arpeggiations (which he sang in a quasi-ironic legato).

Danielle de Niese’s Susanna was a delight. Her tone is bright and carries well, though it’s not perfectly focused (there’s a quiver to it that’s charming but occasionally seems to blunt its authority). Still, she’s a gifted comic actress, not only in her use of tone color and physical movement, but in the way she phrases with the language; even if one forgoes the surtitles, one always knows what she’s singing about. 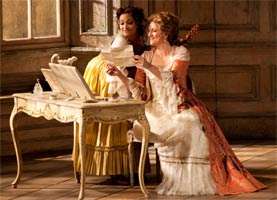 English soprano Emma Bell (making her Met debut in this run) had to pare her obviously formidable sound down to fit the Countess Almaviva’s elegant figure. There were a few phrases in ‘Porgi amor’, her first aria, where it seemed her voice might veer out of control, and this happened again in ‘Dove sono’ (Act Three). Both times, however, she quickly recovered, allowing one to enjoy her aptly aristocratic musicianship. At its best, Bell’s tone is dark and buttery (rather mezzo-ish, really), and she sings softly to exquisite effect (which, thankfully, she did often).

In this large venue, and heard alongside the relatively voluminous voices of Bell and Relyea, Bo Skovhus’s Count Almaviva came across as uncomfortably small-scale. Skovhus voice seemed especially weak in the lower third of its range, and he was easily swamped in ensembles. He was most effective in the recitatives, where one could appreciate how clearly and intelligently he communicated the text. In the ravishing final scene, where he begs the Countess’s forgiveness, he scooped ungracefully around the melody rather than using a quick, light portamento. True, Ettinger’s tempo for this is exceptionally slow (it works, though!), but Skovhus’s phrases could have been negotiated with greater nobility.

I was seriously disappointed by Isabel Leonard’s singing of ‘Non so più”, Cherubino’s breathless Act One aria. Perhaps it was Ettinger’s idea, but Leonard’s dreamy interpretation robbed the music of its ardent unpredictability. ‘Voi che sapete’ fared better; at first Leonard suggested the page’s nervousness by singing stiffly, then gradually loosened up and became more emotionally volatile.

Maurizio Muraro (Don Bartolo) captured the sublime Handelian splendor of his Act One vengeance aria (aided by a stately tempo that highlighted the music’s pomposity). Wendy White portrayed Marcellina as less matronly than usual, which made her seem more of a real threat to Figaro and Susanna’s wedding plans. Philip Langridge’s super-campy Don Basilio would be intolerable (even offensive) except that the veteran tenor’s singing was so suave and stylish, one couldn’t help but like him. Ashley Emerson’s Barbarina is ideally ingenuous; I, for one, wished her Act Four cavatina were several pages longer.

Gregory Keller’s stage direction adds quite a lot of slapstick physical comedy to Jonathan Miller’s original conception, yet most of the added activity appears to derive directly from the music itself. The audience ate it up.