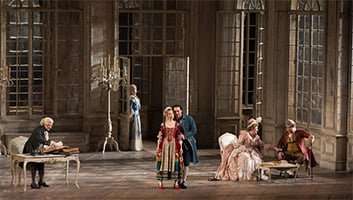 Mozart’s Le nozze di Figaro has returned to the Metropolitan Opera after being out of the repertory for two consecutive seasons for the first time since Jonathan Miller’s production premiered in 1998. David Robertson’s spirited yet delicate approach to Mozart’s score allowed its comedic and romantic elements to shine through as he molded an experienced international cast – most of whom are singing their roles at the Met for the first time – into a smoothly functioning ensemble. This delightful performance was the second of six (one having been cancelled during Hurricane Sandy).

Robertson maintained ideal balances, beginning in the lively Overture in which the woodwinds came through with clarity, the bassoons immediately establishing the opera’s buffa tone. He carefully built the crescendo leading to the Overture’s climax, and there was a smooth transition to the opening scene, in which the opera’s central characters – Figaro, valet to Count Almaviva, and Susanna, the Countess’s chambermaid – are planning for their wedding. 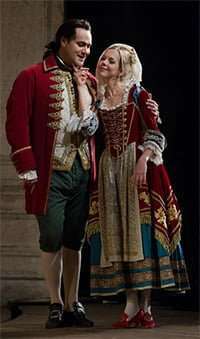 Ildar Abdrazakov as Figaro and Mojca Erdmann as Susanna made a charming couple, enlisting the audience’s sympathies as they conspired with the Countess, Maija Kovalevska, to overcome the scheming of others to obstruct their marriage. These included the lecherous Count (Gerald Finley), the revenge-seeking Doctor Bartolo (Maurizio Muraro), Marcellina (Margaret Lattimore), who has her own connubial designs on Figaro, and the foppish, meddlesome Don Basilio (John Graham-Hall, making a fine Met debut in this run). The principal plot is also interwoven with numerous episodes involving the Count’s randy young page, Cherubino (Christine Schäfer), who although hopelessly infatuated with the Countess is finally matched with Barbarina (Ashley Emerson).

Abdrazakov was convincingly romantic in his affections for Susanna, while making an imposing opponent for the Count. In the opening scene, angered by the Count’s attentions to Susanna, he sang ‘Se vuol ballare’ making a pair of empty boots dance on the stage. (With just three days to go before the Presidential Election, I was reminded of Clint Eastwood’s conversation with an empty chair at the Republican National Convention.) Abdrazakov resonantly taunted the just-conscripted Cherubino in ‘Non più andrai’, but the tempo was a bit too fast as he warned mankind against women in ‘Aprite un po’ quegl’occhi’ in Act Four. Erdmann was a winsome Susanna, with excellent timing in each of the plot’s twists and turns. She sang with beauty and clarity (despite a pre-curtain ‘indulgence’ announcement) in the ensembles, as well as in her only aria, the ardently sung ‘Deh vieni, non tardar’. 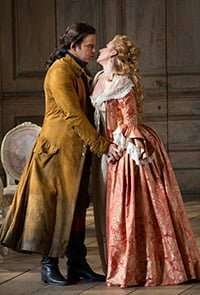 Kovalevska was a resplendent Countess, maintaining her noble bearing even as she joined the servant couple in deceiving, and then entrapping, her philandering husband. Her opening aria, ‘Porgi, amor’, was solid and pleasingly sweet, with her radiant yet wistful ‘Dove sono’ the highpoint. Her spirit and singing were excellent. Finley was in fine form vocally as Almaviva, the sleaziness with which he portrayed the Count initially softening somewhat in Act Two as he expressed understandable indignation at the Countess’s secretiveness in the trio ‘Susanna, or via sortite’, in which Robertson shot cues to the singers, keeping the ensemble in perfect synch. The Count’s true character was perhaps most believably expressed in Finley’s powerful rendition of ‘Vedrò mentre io sospiro’, which undermined the credibility of his later pleas for the Countess’s forgiveness.

Schäfer was amusing as the love-struck page, Cherubino, who is called upon to engage in most of the opera’s physical comedy. Her ‘Non so più’ might have been delivered more breathlessly, but better was ‘Voi, che sapete’ in Act Two, which was sung with an appropriate mix of tenderness and reserve. Erdmann’s ensuing line, “siam d’eguale statura” (we are the same height), was palpably untrue, however, which called attention to the fact that her Susanna could never have gotten into the much smaller dress that she produced to costume Cherubino. Lattimore, returning to the Met after a ten-year absence, was a vocally strong Marcellina whose byplay with Susanna, Bartolo and Figaro was always entertaining. (Marcellina’s fourth Act aria was cut, as was Don Basilio’s moralizing ditty, thereby avoiding unwelcome digressions from the plot.) Muraro has made a specialty of portraying Doctor Bartolo, having appeared as that character at the Met more than forty times (including sixteen in Rossini’s Il barbiere di Siviglia). Muraro sang deeply and resonantly, vowing to triumph over Figaro, the orchestra providing powerful punctuations. 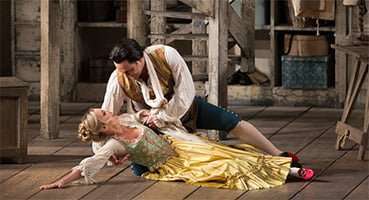 Also in the cast were the outrageously funny Philip Cokorinos as the gardener Antonio, Tony Stevenson as a stammering Don Curzio (a role he has portrayed at the Met more than 70 times), and Ashley Emerson as Barbarina, whose sweetly-sung cavatina ‘L’ho perduta, me meschina’ conveyed distress at having lost the pin that was to have been returned to Susanna. Jennifer Zetlan, filling in for an ailing Lei Xu, and the debuting Irene Roberts ably portrayed the two bridesmaids.

Robertson and the orchestra provided perfect accompaniment for the singers, allowing their voices to project, particularly in the many ensembles. He admirably minimized the prevalence of appoggiaturas, thereby allowing the words – particularly punch-lines – to have their full effect. His pacing consistently aided the impact of the action, such as the simultaneous double-takes by the Count and Countess when Susanna emerges from the Countess’s dressing room. I had mixed reactions, however, to Robertson’s use of a piano to accompany the recitatives. At times this felt jarring, perhaps only because it was unfamiliar, but at other times it seemed to compliment the singers perfectly.

The musical highlight was the wedding march at the conclusion of Act Three, marking the culmination of the opera’s principal plot, as reflected in its title. Robertson played the march as if the musicians were approaching from afar, with only principal desks sounding at first, and then – after Figaro’s ‘Ecco la marcia’ – additional players joining gradually. In this scene, as throughout the opera, the Met Chorus sang splendidly.

Jonathan Miller’s production continues to serve the opera well. Peter J. Davison’s set is attractive and functionally effective, particularly as it rotates between the third and fourth Acts without interrupting the flow of the action, moving the scene into the garden and showing the exterior of the Count’s palace at an odd angle, thereby creating a visually striking setting for the many comings and goings in the final Act. The most effective of Mark McCollough’s lighting effects are the late-afternoon sunlight that streams in as the palace’s French doors are opened in Act Three and the reflections of fireworks against the palace exterior in the finale. Terry John Bates’s choreography was also pleasing, particularly the fandango at the end of Act Three during which the characters planned the assignations that would play out later. Many small details added verisimilitude to the production, such as the servants seen busily at work cleaning outside the Countess’s room each time her door opens, and other servants almost constantly eavesdropping at the door to the palace hall in Act Three.