The Orchestra of the Metropolitan Opera
Philippe Jordan 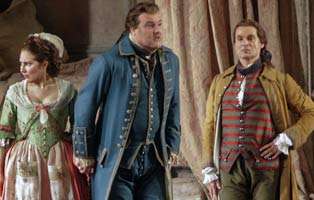 This season’s Metropolitan Opera performances of Mozart’s sublime “Le nozze di Figaro” constitute what in some ways amount to two revivals of Jonathan Miller’s 1998 production. The two halves of the current run, although separated by just a few weeks, feature almost completely different casts – only conductor Philippe Jordan, Maurizio Muraro as Dr Bartolo, Patrick Carfizzi as Antonio and Leah Wool as the second bridesmaid remain throughout the run. This matinee performance offered exemplary singing and acting – by the second of the two casts – and fine music-making from the pit under Jordan’s sure-handed direction.

And, since I had previously attended a performance by the first cast, it also occasioned some thoughts and observations about opera casting and the rich diversity of interpretation that different performers and ensembles can bring even to a single operatic production. (My references below to the first cast are based upon the first performance of the season, on October 2.)

The male headliners in the current cast, Welsh bass-baritone Bryn Terfel as Figaro and English baritone Simon Keenlyside as Count Almaviva, both sang superbly and created memorable characterisations. Terfel’s Figaro showed two sides to his personality, passionately pouring out his inner feelings to us in soliloquy, both early on in ‘Se vuol ballere’ and in the final act in ‘Aprite un po’ quegl’occhi’, but outwardly maintaining a posture of servility toward the Count – save for an angry outburst after the disguised Cherubino is exposed by Antonio in the third act. Keenlyside’s Count was a rather dark and villainous character, whose aria ‘Vedrò mentr’io sospiro’ was delivered with menacing bite, as was his singing in second act ensembles with the Countess, Susanna and Cherubino. (By way of contrast, Erwin Schrott’s Figaro was ever defiant in expression, intonation and gesture to Michele Pertusi’s Count. This created even greater tension in their relationship, and also showed Figaro as an even more dangerous and revolutionary spirit.) 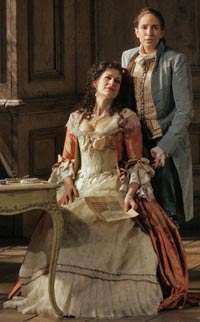 As the Countess, German soprano Anja Harteros was renewing her partnership with Keenlyside in July of this year at Bayerische Staatsoper, Munich. Harteros portrayed the Countess with great nobility, treating Susanna and Cherubino with kind affection whilst remaining ready to preserve her own dignity by standing up to her unfaithful husband, whose pleas for forgiveness rang hollow – at least until the final scene. Her singing was strong, clear and beautifully nuanced, both in her opening aria, ‘Porgi, amor’, and in ‘Dove sono’, for which she earned sustained applause. (In the earlier cast, Hei-Kyung Hong portrayed a somewhat more passive Countess, making her plotting to entrap the Count a bit less credible, but whose character evoked greater sympathy.)

The other women in the cast were all outstanding (as were their counterparts in the earlier ensemble). Russian soprano Ekaterina Siurina made a winning Susanna, a necessary ingredient of any successful performance of Le Nozze, since the plot revolves around her and she is on stage much of the time. Her ensemble singing as well as her sense of comedy were instrumental in making the performance lively and entertaining, and her ‘Deh! Vieni, non tardar’ in the final act was very moving. Marie McLaughlin was a fine Marcellina, trading insults with Siurina’s Susanna most effectively at the outset, and then showering her with affection after Figaro’s parentage was discovered. (Lisette Oropesa as Susanna and Ann Murray as Marcellina both gave outstanding performances in the October cast, but they were somewhat more subdued physically as they hurled invective back and forth.)

As Cherubino, American mezzo-soprano Kate Lindsey, a graduate of the Met’s Lindermann Young Artist Development Program, gave a marvellously comedic performance, capturing the breathlessness of the libidinous young page quite effectively in her aria ‘Non so più’, and later delivering a sumptuous ‘Voi, che sapete’. Her attempts at adopting military postures whilst Figaro sang ‘Non più andrai’ were priceless. Anne-Carolyn Bird made a fine Barbarina, her voice sweet and lovely and her personality charming and engaging. (In the earlier casting, these were the Met debut roles of Anke Vondung as Cherubino and Kathleen Kim as Barbarina, both of whom gave excellent performances.)

Maurizio Muraro made a marvellous Dr. Bartolo in both casts, tossing off patter with consummate ease, displaying a sonorous bass-baritone voice in declaring ‘La vendetta’ against Figaro, and later sheepishly taking on the role of father and father-in-law-to-be to Figaro and Susanna. (Muraro has portrayed this character at the Met not only in this opera, but also in Rossini’s “Il Barbiere di Siviglia”, his Met debut role.) Greg Fedderly as Don Basilio, Tony Stevenson as Don Curzio, and Patrick Carfizzi’s very humorously played Antonio were all memorable comedic characters. (In the first cast, Robin Leggate made an outstanding debut as Don Basilio, and Bernard Fitch gave an over-the-top quality to the stuttering Don Curzio.) 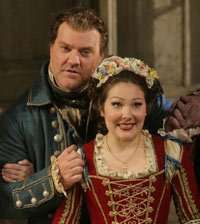 The approach of utilising two separate casts successively during a single run of “Le Nozze di Figaro” is not as strange as it might seem at first blush. This is perhaps the quintessential ensemble opera, requiring performers who can connect with one another musically, comedically and dramatically. To achieve that sort of rapport, ample time for rehearsal and interaction among the performers is essential, even though they may have sung their respective roles many times before. But in this age of jet-hopping artists with engagements all around the world, it is well-nigh impossible to keep such a cast together long enough for a run of a dozen performances, whilst allowing ample rehearsal time in advance and adequate rest between performances. If there are ongoing cast changes during a continuous run, however, the modified ensemble may function less smoothly than the original group that had rehearsed and performed together for the earliest performances. It thus made a good deal of sense to split the run and rehearse two separate ensembles (even though there were some overlapping cast members), thereby solving both the problem of scheduling sufficient performances to meet audience demand and that of achieving a smoothly functioning ensemble.

Actually, the virtually complete bifurcation of casts did not come about entirely by design. Isabel Bayrakdarian had originally been scheduled to sing Susanna for the entire run, but when she withdrew from the latter portion of the run owing to her advanced pregnancy, Siurina was engaged to replace her in the second cast. Bayrakdarian’s withdrawal, although presumably a medical decision, was certainly a wise one artistically. A visibly pregnant Susanna would implicitly introduce plot twists that the opera does not, and indeed cannot, resolve (as was noted in Kevin Rogers’ review on this site of a production by the Royal College of Music in June of this year that featured a conspicuously expectant Susanna). Bayrakdarian later had to withdraw from the earlier performances as well, and the Met turned on very short notice to Lisette Oropesa, another home-grown product of the Met’s development program, who performed in exemplary fashion. Another late substitution in the first cast was occasioned by the withdrawal of Dorothea Röschmann for health reasons from the role of Countess Almaviva, with Hei-Kyung Hong ably taking over that familiar role in the October performances.

In practise, the Met’s casting produced two superb and smoothly-functioning ensembles that gave well-sung and well-acted performances offered some different and interesting perspectives on this delightful opera. On both occasions I attended the entire production was smooth and well-rehearsed, with clever staging and individual gestures and bits of business enriching the performance at every turn. The uniformly outstanding singing at both performances made it impossible to say that either performance was better than the other. Rather, I am contentedly thankful for the opportunity to experience the talent of two so gifted casts.