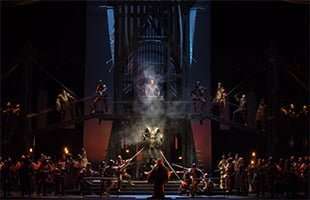 Catching an opera in a cinema is now well-established and has been embraced by international houses such as The Royal Opera and the Metropolitan. Truth to tell, dear reader, that this live relay from New York (a midday matinee there) of Francesca da Rimini by Riccardo Zandonai (1883-1944) was my debut in terms of viewing opera in this way. It was a great success. This version of Francesca da Rimini (there is also a stage version by Rachmaninov) is a very rare visitor to opera houses. The Met was here revisiting its striking Piero Faggioni production from nearly thirty years ago, preserved on DVD from then with Renata Scotto and Plácido Domingo (Deutsche Grammophon 073 4313).

I have got to know Zandonai’s Francesca da Rimini only recently. A friend of mine was already ahead of me when we went to Opera Holland Park’s 2010 staging. For all that a reduced orchestration was used on that occasion, Francesca made a good impression, enough to pursue the opera further. So we have since watched together the afore-mentioned DVD and now she and I have seen this Met relay: we continue to believe in the opera’s excellence and that it courts popularity if only it could be given more chances than hitherto. That said, there was a staging in Paris in 2011, with a cast that included Roberto Alagna; and from a London standpoint, a Royal Opera production under Antonio Pappano is respectfully requested.

Zandonai was considered Puccini’s successor. Musically, Francesca da Rimini (first produced in 1914) has likeness to La bohème (reminding of the friends in their Paris garret) and some harmonic anticipations of Turandot. There are also Wagnerian influences, the opera launched by a jester telling the tale of Tristan and Isolde, but also with strong allusions to Debussy (especially his incidental music for Le Martyre de Saint Sébastien, also by Gabriele D’Annunzio). A scene in Act One – similarly a presentation of a rose – strongly recalls Der Rosenkavalier in terms of its musical allure: which is not to suggest that Zandonai wasn’t his own man, and his scoring for a large orchestra is masterly. 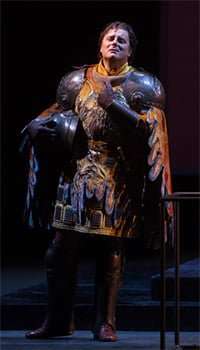 A rough synopsis of the story is that Francesca is duped into marrying a disfigured (lame) member of a rival family. She then falls in love with his handsome, unimpaired brother Paolo. They are betrayed by another, equally grotesque – one-eyed – sibling, Malatestino, and finally they meet their grizzly blood-soaked end at the murderous hands of Gianciotto, Francesca’s husband. The very stuff of opera!

So, in the cosy surroundings of the Barbican Centre’s first-class Cinema 1, with an excellent picture on a good-sized screen and decent sound (not too loud – the bugbear of film-going today), we settled down for an eventful four hours’ worth. Four hours? No, the opera is not that long, but here there were three generous intervals, which initially seemed too much, but in fact added to the enjoyment with off-the-cuff interviews and behind-the-scenes footage. There were also intermission breaks for a cup of tea and anything else necessary! It was almost like being within the Met’s walls and was aided by Gary Halvorson’s well-prepared and unobtrusive direction of the cameras; one advantage over the theatre was the close-ups; the singers’ eyes and facial movements conveyed much that was significant. Sound-wise there were some micro-second gaps in transmission, of no importance, and not recurring from Act Two onwards. Having complimented the aural side of things, the reproduction was also somewhat variable, sometimes presenting the Met acoustic as over-resonant with singers and players slightly recessed, but later into the presentation the voices and orchestra had greater presence and clarity, and also seemed to be louder (if not crudely so) in the last two acts. Synchronisation between sound and vision was not always perfect. 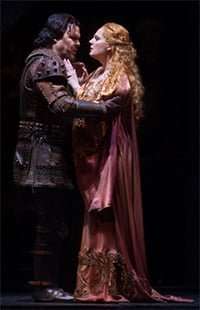 I mention these blips not as a complaint but ‘in passing’, for the experience was an engrossing and thrilling one; and not least the opportunity to come across again an unfairly neglected opera and in a notable rendition. Eva-Maria Westbroek was immersed in the title role. Marcello Giordani, if a little strained at times, was ardent as the good brother, the fair Paolo: they were made for each other. Their extended love-duet in Act Three (companionably and deliciously described as “a song and a snog”!) was sublime and mesmerising, and deeply emotional on behalf of Westbroek and Giordani. Also standing out from a splendid cast was Mark Delavan as Gianciotto who is incandescent when he finds Francesca has two-timed him with Paolo and ensures that they both should pay the ultimate price.

So, good stuff. Marco Armiliato conducted with sympathy and panache – very likely this revival was originally scheduled for James Levine who led the original run – and the Met Orchestra was typically superb; that said I didn’t catch a trace of the lute that Zandonai writes for and the solos intended for a viola pomposo were taken on a cello. Otherwise the colour, swirl, suggestiveness, warring, romance, intrigue, exquisiteness (creating a garden of earthly delights) and ultimate bloody tragedy of this melodrama were done full justice to.

There is one further Met HD relay this season, Handel’s Giulio Cesare, on April 27. The Met’s 2013-14 cinema choices burst with stunners: including Eugene Onegin, The Nose, Tosca, Rusalka, and Prince Igor. Being in the same room as the performance is the ultimate happening, but I’m hooked by the silver screen alternative and can’t wait for more!