Wagner
Die Walküre – Opera in three acts to a libretto by the composer [First Day of Der Ring des Nibelungen; sung in German with English Met Titles by Francis Rizzo]

The Orchestra of the Metropolitan Opera
Lorin Maazel 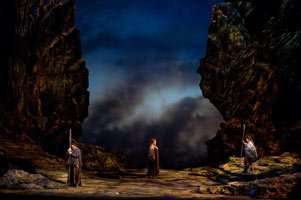 This performance of the venerable Otto Schenk production of “Die Walküre“ marked the return to the Metropolitan Opera of Lorin Maazel who last appeared in the Met’s orchestra pit 45 years ago. (Strictly speaking, that was a different pit, since the Met’s present home at Lincoln Center had not yet been built.) Bass James Morris, in his signature role as Wotan, anchored a strong international cast of principals, all with prior experience at the Met, but most of whom were making their Met role debuts on this occasion.

Maazel had last conducted at the Met in the 1962-1963 season, when he led performances of “Don Giovanni” and “Der Rosenkavalier”. Although known principally as an orchestral conductor – prior to assuming his current position as music director of the New York Philharmonic in 2002 he had held similar posts at the Cleveland Orchestra and the Pittsburgh Symphony and has conducted over 150 orchestras in all – Maazel was quite active as an opera conductor and a Wagnerian. He was the first American to conduct at the Bayreuth Festival (1960) and the first non-German to lead a ‘Ring’ cycle there (1968). He also was artistic director and chief conductor of Deutsche Oper Berlin from 1965 to 1971 and was the first American to serve as general manager and chief conductor of Wiener Staatsoper (1982 to 1984). He has conducted at opera houses around the world and has composed his own opera, “1984”, which premiered at Covent Garden in 2005 and will be produced at La Scala later this year. In June Maazel and the New York Philharmonic will perform Maazel’s orchestral synthesis of Wagner’s Ring, ‘Der Ring Ohne Worte’, in Carnegie Hall. 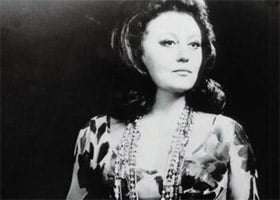 The Met dedicated this first-night performance of “Die Walküre” to the great French soprano Régine Crespin, who died last July. Crespin made her Met debut as the Marschallin in “Der Rosenkavalier” in a 1962 performance conducted by Maazel, and went on to appear with the company in 129 performances.

Maazel took an unhurried approach to the opera, with tempos tending to be on the slow side, and phrases often stretched out, as if to squeeze every bit of beauty out of them, or set off with pauses, allowing for a brief moment of reflection and appreciation before moving onward. He was also quite sensitive to the importance of the Ring’s many leitmotifs to the overall coherence of the work, and missed no opportunity to underscore these characteristic themes that add layers of meaning that explain, transcend, or even contradict the words and actions they accompany. 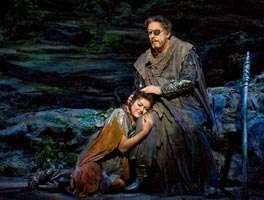 He was particularly successful in shaping the score to illustrate the relationship and interactions between Brünnhilde and Wotan – her exuberant “Hojotoho”, the haunting and tender bass clarinet solo as she approaches and nestles against him prior to his second act monologue, and above all, Wotan’s farewell (“Leb’ wohl”) as he renders Brünnhilde mortal and puts her to sleep surrounded by magic fire. This concluding scene, touching as it does on the tenderness and poignancy of father-daughter love whilst providing both a visual spectacle and music of the most exquisite beauty can surely hold its own against any other opera’s finale, and Maazel led it magnificently. 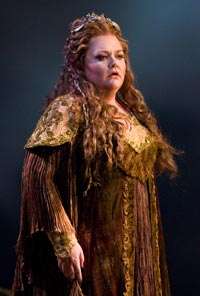 Standouts in the cast were Stephanie Blythe as Fricka, debuting in her first major Wagner role at the Met, Canadian soprano Adrianne Pieczonka as Sieglinde, reprising a role she sang at the Met in 2004, and James Morris as Wotan, which he has now sung with the Met 38 times dating back to 1989.

Blythe, a seasoned Met veteran whose star is in the ascendant – she was terrific singing three roles in Puccini’s “Il trittico” last season and has been well received in the current revival of “Un ballo in maschera” – made a superb Fricka. Her strong yet beautiful mezzo-soprano voice and her imperious characterisation of the goddess made her domination of the hapless Wotan thoroughly believable. Canadian soprano Adrianne Pieczonka was radiant as Sieglinde recognised and fell in love with Siegmund, the twin brother from whom she had been separated in childhood, and her voice was thrilling in the third act when, upon being told that she bears Siegmund’s son, Sieglinde abandons her wish to die and beseeches Brünnhilde and her Valkyrie sisters to save her. 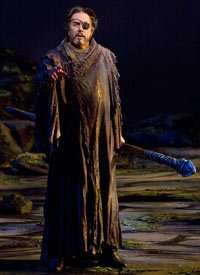 Although Morris did not take on the role of Wotan in “Die Walküre” until 1989, some three years after this production was premiered, he has become so strongly identified with it that it has become difficult to imagine anyone else in the part. (Indeed, if Morris’s appearances in “Das Rheingold” and “Siegfried” are taken into account, he has portrayed the character of Wotan/Wanderer a total of 75 times at the Met.) Both this production and Morris’s days as Wotan are probably nearing an end, however, which raises the question of who will succeed him as the next generation’s Wotan. (Might it be Bryn Terfel, the expected successor at the Royal Opera to Sir John Tomlinson, whose announced withdrawal from portraying Wotan raised a similar question?) In the meanwhile, Morris’s portrayal of the supposedly powerful but ultimately power-less chief God remains brilliant, and his voice has lost neither its strength nor its suppleness. He thus was equally effective when raging above the orchestra and when singing softly to Brünnhilde with only minimal instrumental accompaniment.

All of the other principals were making their Met role debuts. American tenor Clifton Forbis gave a fine account of Siegmund, showing power in his repeated and long-sustained invocation of “Wälse!” and also in his naming of the sword “Nothung!”, and tenderness in his lyrical rendition of “Winterstürme”. He and Australian soprano Lisa Gasteen as Brünnhilde were both in marvellous voice in their encounter late in the second act when Siegmund persuades Brünnhilde to disobey Wotan’s command. Gasteen made an excellent Brünnhilde, barely concealing her contempt for Fricka and then pleading fervently with Wotan – first to save Siegmund’s life and later to preserve her own dignity. Russian bass Mikhail Petrenko sang with an incisive edge to his voice that made his Hunding suitably menacing.

The remaining Valkyries sang quite creditably, although the lack of connection between their words and actions in the first scene of the third act was somewhat disconcerting. Two of the eight (Kelly Cae Hogan as Gerhilde and Laura Vlasak Nolen as Waltraute) were making their Met debuts, and four others (Wendy Bryn Harmer as Ortlinde, Edyta Kulczak as Grimgerde, Jane Bunnell as Schwertleite, and Leann Sandel-Pantaleo as Siegrune) were singing these roles for the first time there. Only Claudia Waite as Helmwige and Mary Phillips as Rossweisse had previously performed these roles at the Met.

Otto Schenk’s naturalistic production, featuring set and production design by Günther Schneider-Siemssen and costumes by Rolf Langenfass, is still satisfying after these many years, allowing the action to unfold without distractions from gratuitously added concepts that are not connected to the story-line of the opera. One less than satisfactory aspect of the production is Gil Wechsler’s lighting, which runs the gamut from dark to darkest. I would prefer having Hunding’s dwelling seem a bit less realistic in order to make the performers’ faces less dimly lit, and even the exterior scenes are darker than ideal.At the end of the performance, Maazel was applauded enthusiastically, not least by the entire orchestra, which evidently relished the experience of working with him to create this marvellous performance.