The Orchestra of the Metropolitan Opera
Patrick Summers 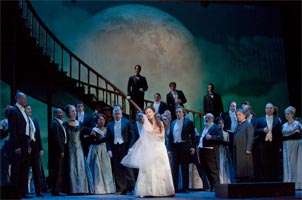 For this Metropolitan Opera revival of Mary Zimmerman’s darkly imaginative staging of Donizetti’s “Lucia di Lammermoor”, which updates Sir Walter Scott’s original Scottish setting from the 17th-century to the Victorian era, Natalie Dessay, returned to the role of the eponymous heroine. Sadly, on this evening, Dessay’s performance did not live up to expectations. While one cannot question Dessay’s dramatic commitment to the demanding role of the fragile young woman driven to madness by love and politics, her vocal performance was extremely disappointing. Her voice appeared thinner than it has on other occasions and she displayed a less than beautiful timbre, especially in the upper register. In her Act One aria ‘Regnava del silenzio’ (The night, deep and dark, reigned in the silence), where she tells of her vision of the ghost of a girl who was stabbed by her jealous lover, her voice sounded harsh, shrill and less than totally secure, and it did not improve. 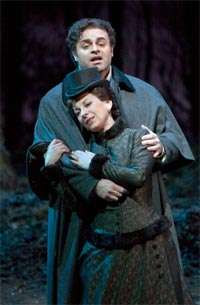 Dessay’s disappointing performance was a painful contrast to that of Joseph Calleja, for whom she came off as a less than ideal vocal and visual match. As Lucia’s lover and unofficial husband Edgardo, Calleja was in absolutely splendid vocal form. He is a true lyric tenor in the Italianate style, his soaring high notes and subtle pianissimos reminiscent of legendary singers of past generations. He used his bright, warm, welcoming voice to tremendous effect, never bellowing, always skillfully deploying the arresting beauty of his timbre. The passion and intensity of his singing were most moving in the Graveyard Scene, where in his final aria, ‘Tu che a Dio spiegasti l’ali’ (You have spread your wings to God), he prays to be united with his beloved Lucia. 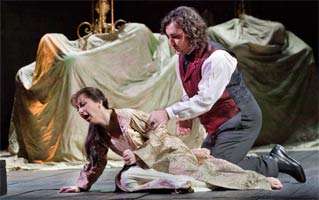 As Lord Enrico Ashton, Lucia’s desperately manipulative brother, who tricks his sister into believing her lover Edgardo is unfaithful and forces her into an arranged marriage with the wealthy Arturo for his financial gain, Ludovic Tézier presented an overly stern character with his large, rich and steady baritone which had no difficulty reaching over the orchestra. Unfortunately, his singing was somewhat lacking in lyrical expressivity and he failed to bring out any other dimensions of Enrico’s character.

In the role of Raimondo, the family chaplain, Kwangchul Youn was dignified and powerful. Theodora Hanslowe as Alisa, Lucia’s companion, and Matthew Plenk as Arturo, Lucia’s short-lived bridegroom, were also strong. But as Normanno, the captain of the guard, Philip Webb sounded strained. He was barely audible in the opening scene outside Lammermoor Castle, and then blustered his way through the rest.

Daniel Ostling’s sets, beautifully lit by T. J. Gerckens and sometimes framed in the style of Victorian book illustrations, have an elegant Edward Gorey feel, especially the rainy ‘Graveyard Scene’, where the guests arrive wearing top hats and carrying large black umbrellas. Mara Blumenfeld’s costumes – a mix of mostly blacks, grays and browns, the sole exceptions being Lucia’s scarlet dress in the Wedding Scene and her blood-soaked white gown in the Mad Scene – looked as handsome as they did when first seen two seasons ago.

Patrick Summers led the Metropolitan Opera Orchestra in an energetic, well-paced reading of Donizetti’s splendid score. The harp solo introducing the Fountain Scene was gorgeously rendered by Deborah Hoffman, as was the radiant flute solo in the ‘Mad Scene’ by Denis Bourikov.

Some video clips from The Metropolitan Opera’s “Lucia di Lammermoor”: