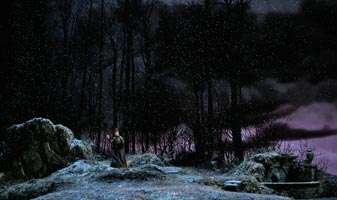 With all the media hype surrounding the Met’s new production of “Lucia di Lammermoor” – much of it centering on soprano Natalie Dessay, who portrayed Donizetti’s tragic heroine in the first six performances of this season – some opera-goers might have feared that this season’s later performances, in which Annick Massis took over the role from Dessay, might not be able to live up to the Met’s claims. Such fears are unjustified. In this performance, the first of Massis’s six scheduled appearances, the lovely French soprano brought her own insights to the role, singing with assurance and appropriate dramatic intensity. Her performance was an unqualified success, as is the production as a whole.

Mary Zimmerman, an award-winning theatre director (she won the 2002 Tony award for Best Director of a Play) with relatively little experience in opera, is in charge of this wise and beautiful staging of Donizetti’s masterpiece. Without a kilt or tartan in sight, the production still looks and feels very Scottish.

Act One is appropriately gloomy with great, overcast skies, a background of barren trees, a light but portentous snowfall, and two-sad faced Irish wolfhounds. Mara Blumenfeld’s beautiful costumes are attractive without being too attention-grabbing. Massis made a striking but pitiable Lucia in a sensible dark-brown walking-suit, worn with hat and boots. The rest of the cast were clothed in a suitably sombre mix of blacks, greys and browns.

Act Two is a directorial and visual stunner. The great hall of Lammermoor Castle is at first sombre and grand, but in a remarkably smooth bit of stage business Robert Ostling’s set is quickly and successfully transformed into a room fit for a wedding feast. During the famous sextet, ‘Chi mi frena in tal momento’, the entire cast poses for a wedding portrait, an unusual but decidedly effective touch. 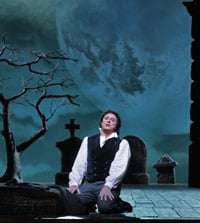 The set for Act Three features a gigantic moon, beautiful but ominous. Among the family tombs at Ravenswood, mourners carried large black umbrellas that effectively reflected the lightly falling mist. The performance ends with the extinguishment of the pale, early morning light rather than the fall of the curtain.

This was the closest to a perfect performance of “Lucia di Lammermoor” that I have ever seen. Mary Zimmerman’s stellar production team bring an astonishing sense of unity to the piece.

The singers are all well-cast and in uniformly excellent form. As Lucia, Annick Massis was deeply moving. Lacking the full dramatic power of Callas or the coloratura virtuosity of a Sutherland, she nevertheless made a very persuasive tragic heroine, with a voice full of freshness and delicacy. Her ‘Mad Scene’ was truly affecting as she brought out all the emotions of the text while shredding her bloody wedding veil.

The rest of the cast was also first rate. As Edgardo, Lucia’s lover, the brawny voiced Italian tenor Marcello Giordani delivered an especially moving performance, full of stirring and heroic singing. Act Three showed him in exceptionally good form, as he delivered his dying utterances in the doleful and powerful final Cavatina. Polish baritone Mariusz Kwiecien, a superstar in the making, brought his striking voice and riveting acting style to the part of Enrico, Lucia’s wicked brother. American tenor Stephen Costello, new to the Met this season, was a penetrating and focused Arturo. Another American tenor, Michael Myers, was appropriately malevolent in the role of Normanno. As Lucia’s companion Alisa, American mezzo Michaela Martens was fine.

The magnificent Met Chorus was vigorous and precise. James Levine, not known as a bel canto specialist, but a musician who can conduct anything, led the Met players in a dramatic, emotionally gripping account that was played meticulously from beginning to end.