Verdi
Macbeth – Opera in four acts with a libretto by Francesco Maria Piave & Andrea Maffei after the play by Shakespeare [sung in Italian with Met Titles in English, German and Spanish] 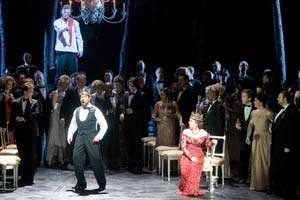 “Macbeth” is one of the most frequently performed Shakespearean tragedies, but there are fewer opportunities to become familiar with the Verdi opera inspired by the play. Composed in 1847, the work did not come to the Met until 1959, when it had a spectacular premiere featuring Leonard Warren in the title role and the house debut of Leonie Rysanek as Lady Macbeth (substituting for Maria Callas for whom the production had been planned). Until last October, when the current production debuted, the opera had not been seen at the Met since the 1988 performances of the 1982 Peter Hall production.

“Macbeth” is Verdi’s tenth opera – his first drawn from a Shakespearean source – and represents a giant leap forward in his development. The score offers relatively little of the abundant lyricism that made the composer so famous. Like most of his creations from the late-1840s on, it pays more attention to drama and the expression of character. Prior to “Macbeth” nothing Verdi had written had been so successful in its portrayal of psychological aspects of character. Lady Macbeth, for example, is a particularly demanding part for a singing actress. It is one of Verdi’s earliest roles in which the character’s dramatic and psychological growth is matched by the development of the music. 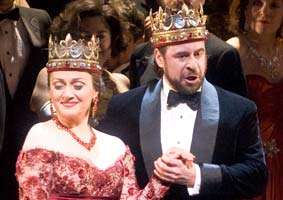 For this performance of Adrian Noble’s darkly staged production, the Met assembled a new cast. Carlos Alvarez took over the towering role of Macbeth and Hasmik Papian played his fearsome wife. With his long mane of dark wavy hair, Alvarez has an attractive if not particularly strong stage presence. Like his looks, his sound is appealing, but his characterization of Macbeth lacked the larger-than-life quality that one looks for in the role, and he failed to adequately convey his character’s cruelty or guilt.

Papian’s less than magnetic performance as Lady Macbeth was equally disappointing. She made clarion sounds when they were called for, and appeared comfortable when singing high notes, including the pianissimo high D flat in the sleepwalking scene. But her relatively weak lower register was a major drawback, especially in ‘La luce langue’ her Act Two aria about the prospects of power. Her acting was certainly enthusiastic, but over the course of the evening her wide-eyed smugness proved wearing, and she never succeeded in conveying the full weight and complexity of the character.

While the two principals were less than fully effective in their roles, absolutely knock-out performances were provided by two supporting cast members. As the doomed Banquo, the formidable René Pape was in fresh, strong voice, his magnificent sound always at the service of the music and the drama. Joseph Calleja’s delivery of ‘ah, la paterna mano’, Macduff’s aria, was particularly ardent and moving, and his warm, wonderfully-focused sound made a splendid contribution to the ensembles.

The Metropolitan Opera Chorus sang and acted superbly throughout, making an especially powerful impression in the tremendous finale to Act One and in ‘Patria oppressa!’ at the beginning of Act Four.

“Macbeth” has been called a “conductor’s opera”. James Levine’s conducting was as taut and exciting as one could wish. He led an intense, visceral reading that did great justice to the shifting demands of the score, with its continual alternation between raw vigor and brooding gloom. The Met Orchestra was with him all the way, producing perfectly focused sonorities. One only wished that the lead singers had more adequately filled the bill.