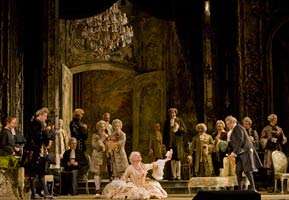 After eighteen years, the Metropolitan Opera has returned its 28-year-old production of Puccini’s “Manon Lescaut”. Written in 1890-92, this is Puccini’s third opera and first international success. By the time he started to work on Abbé Prévost’s tale of the devoted lover des Grieux and his inconstant mistress, the novel had already inspired two operas by French composers: Auber’s “Manon Lescaut” (1856) and Massenet’s frequently-staged “Manon” (1884). Given the immense popularity of the latter, Puccini’s publisher, Ricordi, was reluctant to back a new opera based on the same story.

Despite all warnings, Puccini went ahead and produced a work so different from its predecessors. Whereas a certain elegance and lightness of tone pervades Massenet’s version, Puccini’s highly melodramatic opera is infused with elements of verismo and sentimentalizes the characters of Manon and her faithful lover, downplaying the magnitude of Manon’s infidelities and presenting des Grieux as the love-struck idealist, faithful until death. The music includes some of Puccini’s most beautiful melodies. 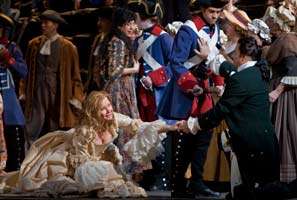 The Met’s 1980 production is a spectacle in the old-fashioned, realistic tradition. Originally staged by Giancarlo Menotti but now under the hand of Gina Lapinski, it still looks quite handsome, and – despite the arrival of the carriage drawn by a live horse in the first act, and the appearance of Manon’s lap-dog in the second – never gets in the way of the music. The elaborate staging of the third act – with the prostitutes being led off to the ship bound for America like the nuns being called to the guillotine in Poulenc’s “Dialogue of the Carmelites” – is most impressive. After so much realism, the abstract landscape of the Louisiana ‘desert’ in the fourth act is less effective. 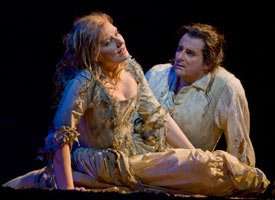 As Manon, Karita Mattila was in excellent voice, her top notes always focused and clear. Yet for all her radiant singing, she was not entirely credible as the ill-fated heroine. The role of Manon is particularly demanding and requires a singer who can convey romantic ardor and physical torment in extremis, but also shallowness, selfishness and vanity, and make all these qualities seem beguiling. In a characteristically over-the-top performance, Mattila was most successful in conveying Manon’s industrious suffering. She was less effective in expressing her fragility and indecisiveness. In place of the girlish coquette of Act Two, Mattila portrayed her as a sluttish vamp, jumping up on the bed and kicking her legs up in the air at every opportunity. In spite of this, she had some glittering moments in this Act, notably her aria ‘In quelle trine morbide’ (In these soft silken drapes), in which she voiced her regret about abandoning des Grieux. Her rendition of ‘Sola, perduta, abbandonata!’ (Alone, lost, abandoned!), as she awaited a terrifying death on a wasteland in Louisiana, was dramatic and penetrating.

As the Chevalier des Grieux, Marcello Giordani sang with gripping power and intensity and projected a strong sense of progression from infatuation to desperation. One could have wished for more lyricism and theatrical grace at times, but Giordani employed his full-blooded, rich tone to thrilling effect, especially in his passionate Act Three aria, ‘Guardate, pazzo son’ (Look, I’m insane), and in his stormy reunion duet with Manon, ‘Tu, tu amore?’ (You, you, my love?), in the preceding act. 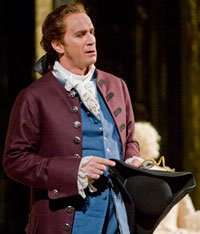 With his firm and full-toned baritone Dwayne Croft as Lescaut was a superb and elegant scoundrel. As Geronte, Dale Travis Geronte was aptly ridiculous, without being overdrawn. Bernard Fitch brought some humor to the part of the frustrated Dancing Master. Sean Panikkar, making his Met debut, brought a fresh and clear lyric sound to the role of the student Edmondo.

James Levine, who conducted “Manon Lescaut” in the Met’s premiere run of this production in the 1979-1980 season, delivered a spirited and passionate reading of Puccini’s grandly melodramatic score. The orchestra ‘Intermezzo’ that opens Act Three was especially moving. The singers of the Metropolitan Opera Chorus were at their very best in the strikingly dramatic roll-call of prostitutes.