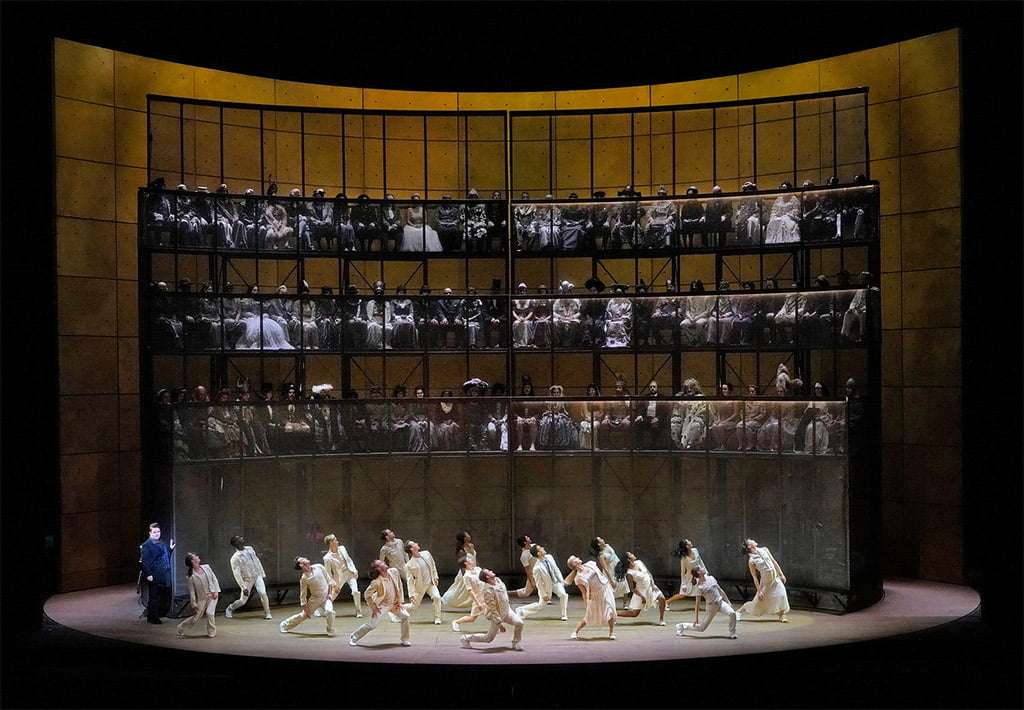 The Metropolitan Opera, for the first time in its history, has begun scheduling operas on Sundays, this presentation of Gluck’s Orfeo ed Euridice being the third such matinee. This historically important work marked a turning point in the history of opera, supplanting highly ornamented style and da capo arias with more emotionally expressive singing, presaging the operas of Mozart and Wagner, and also increased the importance of dance. This is the third revival of Mark Morris’s 2007 production, which is based on Gluck’s original 1762 version of the score, appropriately combining engaging choreography with a vocally powerful dramatization of a happy-ending adaptation of the Orpheus myth, all presented in an uninterrupted 90-minute span.

Mark Wigglesworth, returning to The Met after a thirteen year absence, draws playing that underscores the nobility, melodic beauty and dance rhythms of Gluck’s score, providing firm support for the small but excellent cast and the dancers of the Mark Morris Dance Group, augmented from the ranks of The Metropolitan Opera Ballet. The extended orchestral passages accompanying Morris’s dancers throughout the opera are particular highlights, capped off by the celebratory suite of dances at the opera’s conclusion. 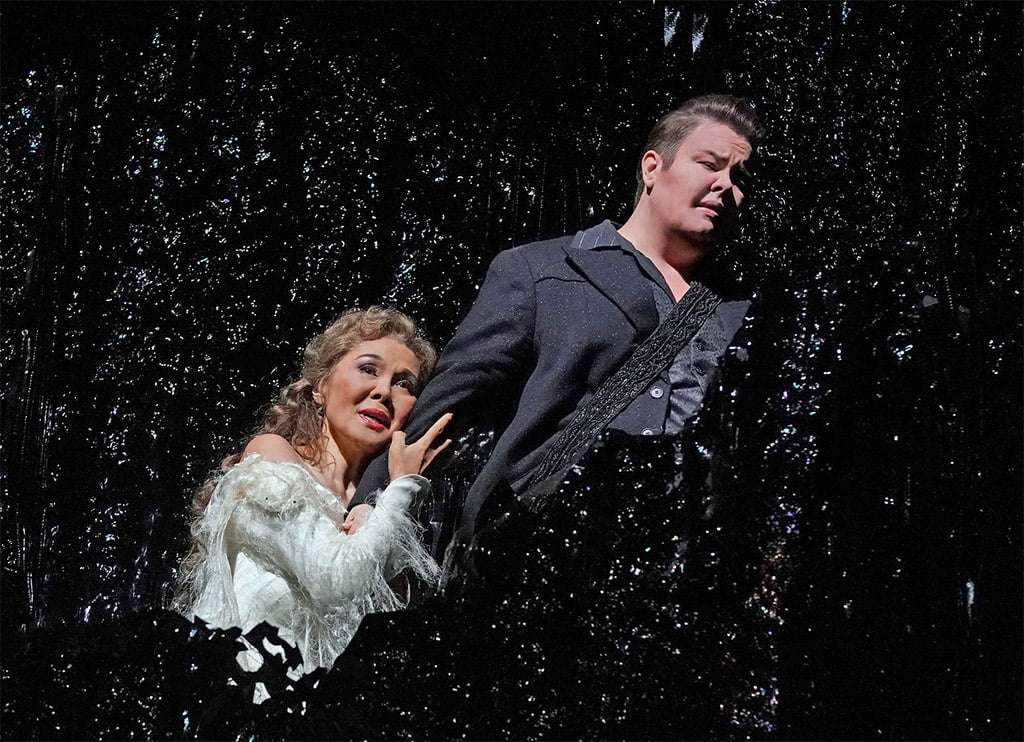 Jamie Barton, clad in a simple black costume, gives an outstanding characterization of Orfeo, powerfully expressing grief at Euridice’s funeral and, in ‘Che puro ciel’, delight at the beauty of Elysium after persuading the furies to allow him to leave Hades and enter the Elysian Fields. Barton’s superb rendition of the opera’s best-known aria, ‘Che farò senza Euridice?’ (What will I do without Euridice?), ably conveys her character’s despair at the thought of losing Euridice a second time.

Hei-Kyung Hong, costumed in a long white gown, is a lovely Euridice – the twenty-fifth role in her thirty-five year Met career that includes more than 350 appearances on The Met stage. In Euridice’s duet with Orfeo in the labyrinth, ‘Vieni, apagga il tuo consorte’, and the ensuing aria ‘Che fiero momento’, her brightly-sung depiction of Euridice’s stubborn jealousy makes Orfeo’s inability to keep from looking at her completely understandable. Hera Hyesang Park is delightful as the cupid-winged Amore, casually dressed in a pink tee shirt, jeans and sneakers. She is lowered on wires from high above the stage to allow Orfeo to revive his deceased beloved. She brings sweetness and charm to her aria ‘Gli sguardi trattieni’, in which she warns Orfeo that he must not look at Euridice as he leads her out of Hades, thus establishing the crux of the plot.

Gluck gave the chorus and dancers a large role, and they are focal points in this production, unified through coordinated gestures and accents into a single, powerful dramatic force as they initially bar Orfeo at the gates of Hades. Neither Morris’s choreography nor the dancers’ rather informal, modern costumes, designed by Isaac Mizrahi, place the opera in any specific period, but the costumes change as the opera progresses – dark tones when consoling Orfeo at Euridice’s funeral and resisting his attempt to enter the underworld; white when depicting the beauty of the Elysian Fields; and brightly colored in the joyous dances celebrating Orfeo and Euridice’s return to the upper world and the triumph of love over death. 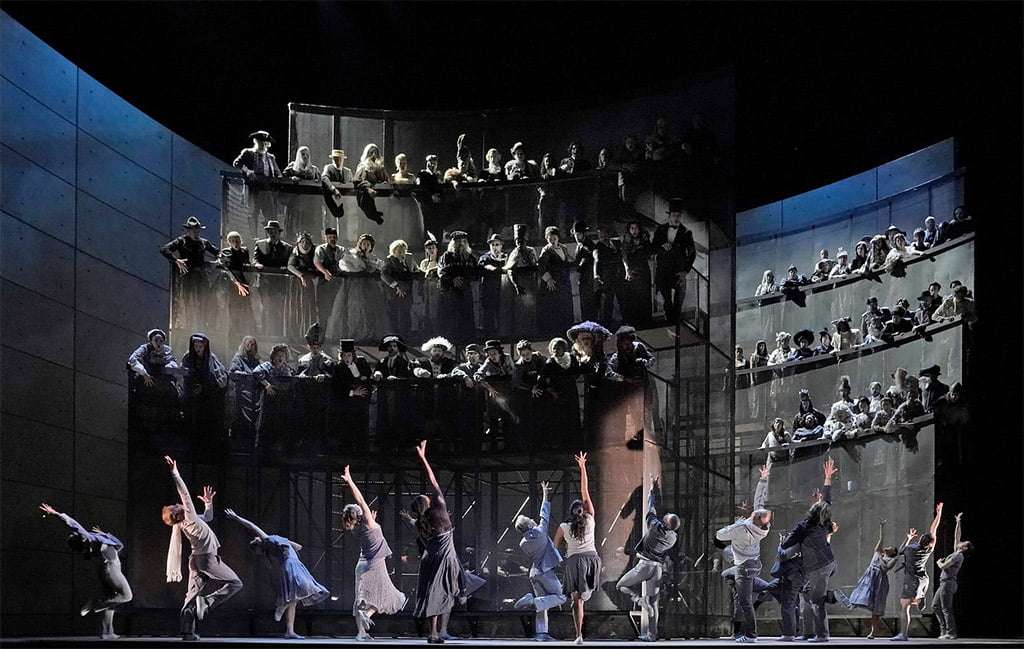 To further emphasize the timelessness of the Orpheus myth, Mizrahi dresses the chorus to represent ninety historical personalities, ranging from antiquity (Moses, Plato, Julius Caesar and Cleopatra), through centuries of monarchs, world leaders and icons of arts and letters, to the more recently departed John Lennon, Mother Teresa and Diana, Princess of Wales, making it hard to resist the temptation to attempt to identify their characters rather than just appreciating their excellent singing.

Allen Moyer’s scenic design makes effective use of simple elements. A triple-tiered chorus gallery can be divided in half and repositioned on the stage, but most of the time it stands in front of a tall semicircular wall. When the furies decide to allow Orfeo to enter Elysium, a six-story-tall metal staircase descends from above the proscenium until its lowest two flights have passed through a trapdoor, then rises bearing Orfeo, who descends two flights to the stage level as the orchestra plays the ‘Dance of the Blessed Spirits’. The most dramatic and beautiful scenic change takes place as Orfeo and Euridice begin their journey out of the underworld. The semicircular wall that served as a backdrop rotates to the front of the stage, forming the labyrinth through which they must pass to reach the upper world. James F. Ingalls’s dramatic lighting brings out glistening highlights on the dark surfaces of the labyrinth. When Amore has again reunited the pair, the wall rotates to its original position and the stage is flooded with light as the celebratory dances commence.