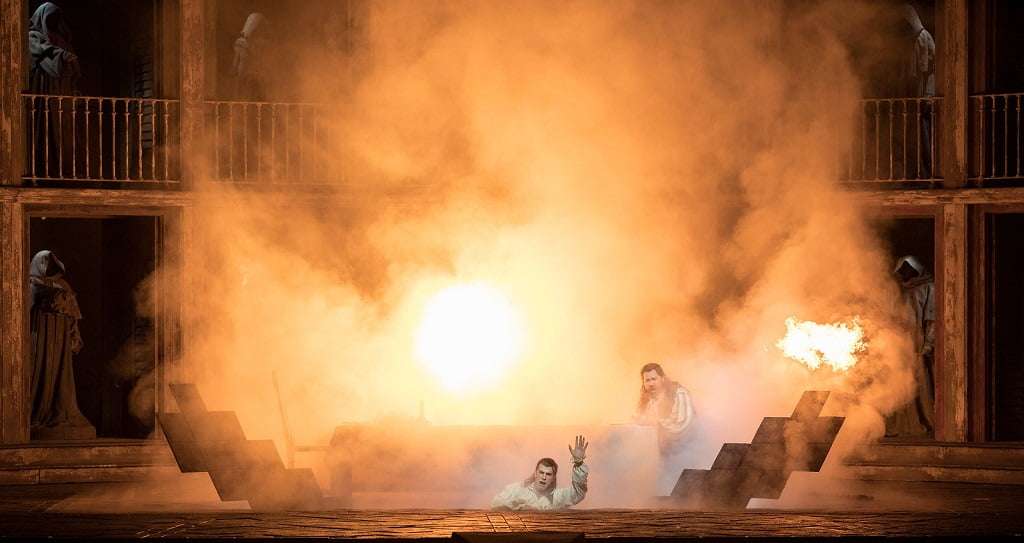 This was the first night of the Met’s third revival of Michael Grandage’s 2011 production of Don Giovanni.

Christopher Oram’s minimalist and multipurpose eighteenth-century set is composed of a three-storey mobile façade of shuttered balconies, which open up and slide back and forth to represent the many and varied locales. Populated by women during Leporello’s first-Act ‘Catalogue’ aria, the different levels are occupied by gray statues – including an outsized one representing the Commendatore – to suggest a gloomy graveyard in Act Two. Oram’s costumes are also period creations. The simple and flexible staging keeps the focus on the characters and the music, allowing Da Ponte’s witty libretto and Mozart’s elegant score to come through with appealing directness.

The performance is first-rate. Cornelius Meister, making his Met debut, draws nuanced and effortless playing and fine singing. The nimble continuo for the recitatives – provided by David Heiss and Howard Watkins – enriches the seamless fluidity of the mostly swift-paced account. 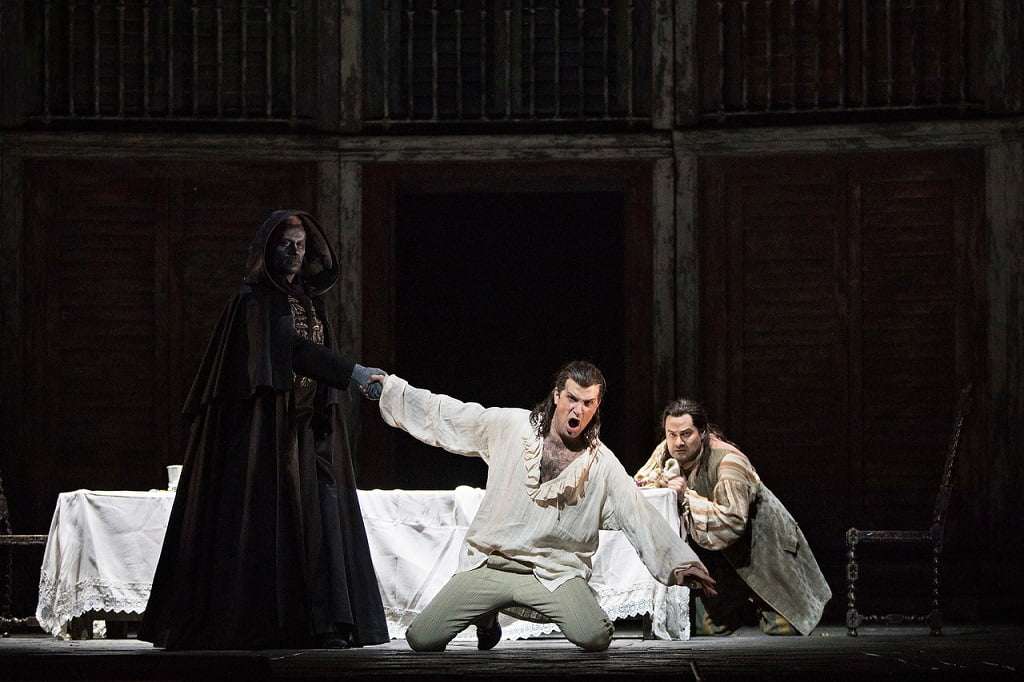 Luca Pisaroni is an especially vigorous Don Giovanni, physically and vocally, successfully varying color to highlight the Don’s complex personality. He is coolly persuasive when pleading with Donna Elvira to accept his renewed ardor, exhilarating but somewhat coarse in the ‘Champagne’ aria, belligerent and direct in the graveyard scene. His partnership with Ildar Abdrazakov, a robust and blustering Leporello, is well-matched and highly likable. Where Pisaroni is suave and authoritative, Abdrazakov is comic and easily intimidated, and impressive in recitatives utilizing a wide range of moods and dynamics. Rachel Willis-Sørensen is a particularly powerful and winning Donna Anna, singing with lyrical, luminous sound and keen intensity.

As Don Ottavio, Donna Anna’s patient husband-in-waiting, Stanislas de Barbeyrac makes a good impression, offering an unusually forceful depiction while unveiling a lyric voice of significant weight in ‘Dalla sua pace’ and ‘Il mio tesoro’, and Federica Lombardi delivers a dignified and honest interpretation of Donna Elvira, marked by impassioned singing, notably in ‘Mi tradi’ to emphasize the conflicted nature of the character. As the spunky country-girl Zerlina, the sweet-voiced Aida Garifullina has a genial stage-presence and displays suitable softness and sensitivity in ‘Vedrai, carino’ as she consoles the battered and bruised Masetto.

Rounding out the excellent cast are Štefan Kocán, appropriately avenging as the Commendatore, and Brandon Cedel exhibits a wonderfully hearty voice in a charming portrayal as Zerlina’s future husband, Masetto.